Robotics have already enabled major productivity gains in manufacturing, but as the technology becomes more affordable and labour gets harder to find and more expensive, it could start to play a bigger role in the plant logistics and warehousing, too, helping workers do their jobs more safely and quickly.

Robotics have enabled major productivity gains in manufacturing, but as the technology becomes more affordable and labour gets harder to find and more expensive, it could start to play a bigger role in logistics, too, helping workers do their jobs more safely and quickly. 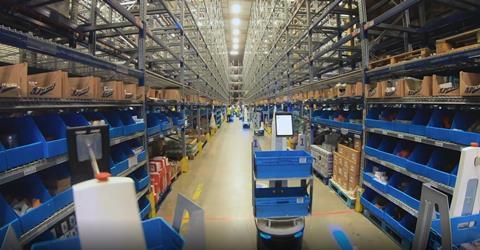 One of the hurdles in implementing robotics is to get the acceptance of the workforce. Tim Miller, former senior manager for Toyota’s Chicago parts distribution centre, said at the recent Automotive Logistics and Supply Chain Live North America conference: “The standard response that we’ve all heard is ‘leadership is coming for our jobs, you’re taking our jobs’ – those type of things, but that that isn’t the case.”

Harry Chase, director of advance materials at GE Appliances, concurred, saying that GE Appliances is mostly focused on automating dirty, dull or dangerous jobs and finding ways where robotics can support the team members, rather than vice versa.

Getting the workforce on board
What really helps with acceptance, according to Chase, is to involve the employees by asking them where they would like to see robots deployed, or letting them name the robots.

Employees’ reactions also differ depending on the type of robot. GE has mostly invested in Automated Mobile Robots (AMRs), as its first goal is to eliminate forklifts. As such, it has introduced about 25 robots per year over the last two years, a mix of tugger-style AMRs and picking robots. Chase said that the tugger robots are more likely to put the employees off, as they look like they should have a driver, whereas the workers are more likely to regard the picking robots as their helpers.

Once the employees are on board, the next thing to consider is how quickly they can learn how to work with the robots. Miller said that when the robots were first introduced, employees realised that they had to adjust their way of working with the robots, but afterwards, productivity really skyrocketed.

Some adjustment time when robotics are set up is fine, but if working with the robots is so complicated that it takes several weeks of training, that leads to other problems. David Paquin, director of industrial segments at robotics provider Locus Robotics, explained: “Labour is at a premium. It’s hard to find and it’s hard to retain. We talk to clients or customers who have 100% plus turnover every year in their picking operations. You need solutions that are flexible, scalable and easy to learn.”

Scalable does not just mean increasing the capacity, he clarified. When moving volume to different buildings, for instance, it is important that operations can be wound down quickly, as well as scaled up.

Labour availability
Panellists agreed that robotics can help smooth out the issues of labour rates and availability. “The cost of labour is one thing, but the availability isn’t,” Paquin said. “I think we’re seeing that in Mexico now too, and even South America. We get a lot of interest from that part of the world. Sometimes it’s a little harder to justify a business case – you can’t pay off the technology in 12 to 18 months, like most US companies want to do. But there’s definitely more of a driver.”

Chase echoed that with robotics in logistics in countries with lower labour rates, you have to account for a two- to three-year payback, which might put some US companies off who are hoping for a faster one-year return on investment. He added that the robotics really add flexibility and consistency, as well as noticeably improve the working environment.

“These are all dangerous dirty jobs, no matter which country they’re in, and I think most employees do appreciate when we can take that away from them, and hand it over to some type of automation thing,” Chase explained.

Irrespective of the benefits, the costs do remain high and companies are looking for ways of bringing down the price of entry. One way is to use ‘robots as a service’, which Locus Robotics has found popular with its customers.

“There isn’t a lot of upfront investment and there aren’t a lot of infrastructure changes required for AMR, so the payback is more immediate,” Paquin explained. “If there is a labour saving, it doesn’t need to be so great that it covers half a million dollars in capital.”

He added that another major benefit for customers is that they don’t have to worry about the technology becoming outdated, which is a real prospect in a field of technology that is still relatively young and fast-moving.

Flexible factories
Chase said that GE Appliances has not used robots-as-a-service but that it is vital to get as much value out of the robots as possible, and one thing that helps a lot with that is interoperability – both between different iterations of one manufacturer’s bots, and between different manufacturers: “It’s like buying your latest cell phone, you get really excited: ‘Hey, I got this iPhone 12,’ and then an iPhone 13 Pro comes out and you’re all upset; robots can be the same.”

Manufacturers do design the robots to be flexible, but Chase said he had experienced times where robots needed to be sent back to the factory to be updated, which takes them out of service for a while. Thankfully, over-the-air updates are increasingly common for robots. On the other hand, there is still work to do on interoperability between manufacturers, where currently workarounds like API calls and middleware are needed for the robots to talk to each other.

Regardless of the cost, however, Miller concluded that it is now time to at least get experience with logistics robots in warehouses and plants: “I would also add that it’s important to get in and learn, and understand this technology, and be ready for when it does meet your price point. I wouldn’t wait, just because the labour cost isn’t very high – there are other benefits.”

The full session with David Paquin, Harry Chase and Tim Miller is available on demand here.