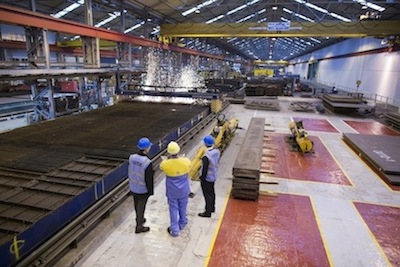 As a result of a £3.1m investment, Tata Steel recently opened a new profiling centre in the West Midlands; AMS went to take a look

Wolverhampton today stands a long way from the glory days of the 19th century, when it was the beating mechanical heart of the UK’s “Black Country” – so-called because of the smoke billowing from its multitude of foundries, forges and factories.

Nonetheless, as noted by Mick Horan, Tata Steel’s director of heavy gauge decoiling and plate profiling, UK and Ireland, the area remains a stronghold for British manufacturing, accounting for roughly 70% of steel consumption. In fact, this January Tata Steel unveiled a new steel plate profiling centre at its 20-hectare Steelpark site, where it has already established an automotive service centre for high-value components and is in the process of constructing a light gauge service centre for slitting and decoiling.

The total investment at Steelpark amounts to £15m, which Horan describes as “a vote of confidence from the Tata board”, with £3.1m for the profiling centre. Nonetheless, the investment is taking place in an environment of consolidation, as Tata Steel reorganises its holdings across the UK and Ireland. According to Horan, this was an “ongoing policy” but the recent recession has provided “a catalyst to deliver it in a short time-scale”.

“Our customers ultimately want low cost and they want high service, but the only way we can really keep driving the two is by bringing our businesses together and creating these national hubs,” says Horan. The company closed its facility at Cradley, also in the West Midlands, in early December last year and will be shutting its nearby Wombourne site in June, after more than 20 years at these locations. Tata Steel now has five national processing hubs and 15 centres. In addition to the automotive and light gauge hubs at Steelpark, long products are the focus at Teeside and heavy gauge at Llanwern in Wales.

Firm foundations
Stepping inside Tata Steel’s newly opened profiling centre, the industrial heritage of the area is plain to see in the floor, which is brick and tile in parts; the centre stands on the site of a mill from the 1940s. Horan says that all the buildings at Steelpark have been “recycled”, except for the headquarters. While Steelpark as a whole has a manufacturing area of 65,000m2, the profiling centre now offers 16,125m2, more than doubling the floorspace previously available.

Annual capacity has increased from 32,000 to 47,000 tonnes based on a three-shift, 24/5 regime, although the centre is currently operating at two-thirds that level. As Horan points out, at a few weeks old it is “still a business in construction”. Indeed, some of the machinery has yet to be installed.

When fully furnished, the facility will house five high-definition plasma profiling machines, two laser, two gas and five machining centres. One gas machine, two plasma and one laser remain to be installed, which Horan says will take place by the end of March. Two of the plasma machines will be new, as will two of the five machining centres ­– the rest having been relocated. Due to demand from customers, Horan is attempting to shorten the construction period, which was originally scheduled to end this summer. He thinks it will be around September or October before the profiling centre hits the level of productivity that will produce the 47kt per annum.

Mostly based in the UK, around 70% of Tata Steel’s 200 customers are in the lifting and excavating (L&E) sector, 5-10% are in the energy sector and approximately 5% are directly involved in the automotive sector, although the profiling centre itself only makes product for the manufacture of rims and wheels for off-highway vehicles. Tata Steel also serves general engineering customers. Clients currently include Volvo, GKN and Nacco Materials Handling Group. [sam_ad id=17 codes='true']

The benefit of the new profiling centre for Tata Steel’s customers derives from the combination of profiling and finishing at one location; although most companies which profile also offer some finishing, Horan emphasises the “scope and scale” of services at the new centre, including “a really wide range of secondary and tertiary processing”.

With its consolidation strategy over the past five years, Tata Steel has also brought together its supply chains. At Steelpark, the company now has one team optimising logistics across its businesses. The reorganisation has brought the additional plus point of assembling a substantial engineering team, which now numbers 36 qualified personnel, in comparison with six previously at Cradley. “That just gives you a range of flexibility and capability on the site,” says Horan. As a whole, Tata Steel now employs 565 workers at Steelpark.

Getting up to speed
Supply chain security is one advantage that Horan says comes with Tata Steel’s set-up in the UK. The company handles the steel all the way from its mills in Wales through to delivery to the customer, which helps to hit targets. “We’re not having to build up big stocks to buffer against a boat coming in from China,” explains Horan. There are also clear benefits in terms of end results: “the quality of the steel that you get is critical”.

At full capacity, 1,000 tonnes of raw material will enter the facility per week, being tracked from start to finish by Stratix inventory and operations management software. There is typically a 30% yield loss during processing, and the ‘skeletons’ are sent back to the mill for reuse. 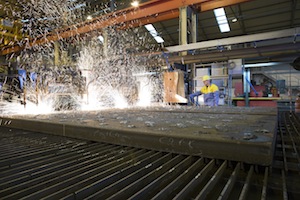 The gas profiling machine which was operational at the time AMS visited, manufacturing for Titan, was processing feedstock from Tata Steel’s plate centre in Scunthorpe. The material had been delivered by road, though most transportation to Steelpark is by rail.

The plates are stored at the profiling centre and the number brought out for processing depends on the order requirement, ranging from one small cut-off to 40 plates. Work-in-progress (WIP), and indeed finished product, is moved around the profiling centre by forklift truck. The steel plates are lifted onto the profiling machines by cranes with vacuum, electromagnetic and mechanical grabs. Bay 1 has a 10-tonne capacity crane, while Bays 2 and 3 have 25-tonne lifting capacity.

The plates are currently restricted by a material handling capacity of 16 x 3m, but Horan says this will soon increase to 18.5 x 3m. The gas machines, supplied by Messer, have a bed size of 20 x 5.7m, while the plasma machines from Esprit are 20 x 5m. The Bystronic laser machine accommodates a maximum plate size of 8 x 2.5m, and the Trumpf laser 4 x 2m.

The layout of the equipment in the profiling centre reflects the progression of material from thick steel at the gas machine to thinner plates with a cleaner edge at the plasma bed and the finest product at the laser machines. The gas machines will cut thicknesses of 6.0-170mm, with a tolerance of +/- 2.0mm and a maximum 1.5% draft angle on the cut; the plasma will cut 5-55mm, +/- 1.5mm with a 3% draft angle; and laser 0.8-20mm, +/- 0.25mm. Throughput per gas machine is around 0.75tph, 1.3tph for plasma and 0.3tph for laser.

Dust extraction pipes have been fitted under each machine bed, to take airborne debris and fumes to a filtration and bagging system. The ducting, says Horan, was “one of the biggest construction challenges”. This work will need to continue as more machines are installed.

In operation, the manpower for the profiling machines is low, typically two workers per bed, although the gas machine is currently operated by a single employee. They are automated by software accessible to personnel via touchscreen computers next to each bed. For instance, the plasma machines have Hypertherm EDGE Pro controllers running on a Windows base system. However, this does not eliminate the need for human intervention. At the plasma machine AMS saw, a worker swept the surface of the bed periodically in order to prevent the scoring of the plate edge if the machine were to go over metal debris. 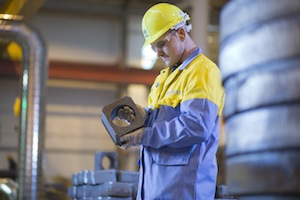 At the far end of the profiling facility lies the finishing equipment. Eventually, the total complement will be: five machining centres, three flattening presses, two press bakes and one slag grinder for edge finishing.

Three of the milling machines are being relocated from Tata Steel’s other sites and two are new. Three are XYZ vmc, one is Victor and the other is Dahli MCV 2100. According to Horan, the latter provides an efficiency advantage by combining operations previously performed by three different machines. The two chamfering processes and one drilling process are now performed in one go, reducing set-up and throughput times.

Horan explains that the MCV 2100 was established according to single-minute exchange of die (SMED) principles, with specialist jigs used to place the next set of components ready while the current set are being machined. “Dressing, verification and packing operations are also completed whilst the machine is processing,” he states.

The philosophy of shaving off time wherever possible clearly permeates Tata Steel’s recent investment at Steelpark. According to Horan, the new plasma machines also represent “a step change” in terms of efficiency, being able to produce bolt-ready holes.

Although a relatively small percentage of Tata Steel’s customers are automotive, the lean principles governing the new profiling centre create a strong link with the industry. Or, as Horan puts it: “We want to get to that Toyota standard”.