The OEM’s latest full factory, at Tangier, is now an important ingredient in its European production network 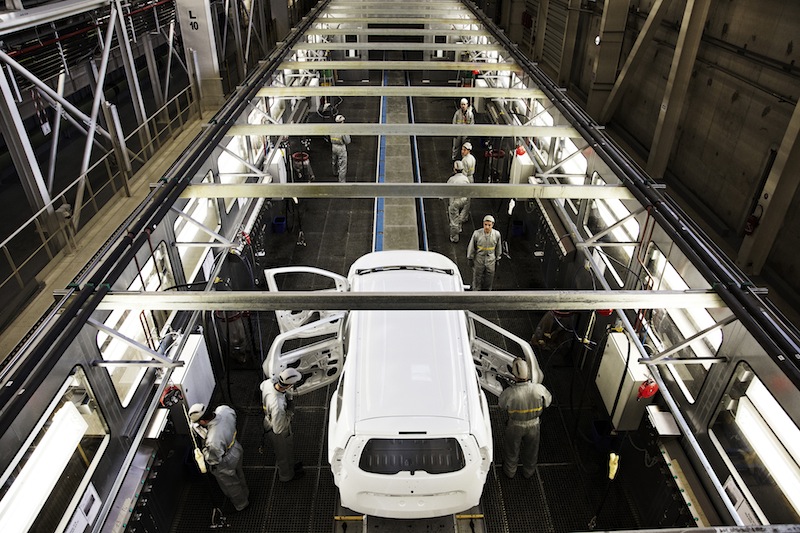 Renault’s newest full manufacturing plant, at Tangier, opened in 2012 and now employs nearly 5,500 people. Around 20km from the city and 35km from the port, Renault Tangier is located in a tax free-zone, which means that vehicles made there can be imported into Europe without being subject to import duty. This effectively makes it part of Renault’s EU production network, and certainly Renault Tangier has become a key plant within this group. The factory supplies Dacia Dokker, Lodgy and Sandero models to Europe and regional markets and has recently added production of the soft-off-road versions of each model, which are badged as Stepway.

Renault Tangier also supplies body pressings to other group plants in Brazil and India, where the Dacia Lodgy and Dokker models are or soon will be assembled. The supply of body pressings will shortly also include Renault/Dacia facilities in Colombia and Russia, further embedding Tangier’s role within the Renault manufacturing network. In addition, this export programme involves Renault shipping components from some of its Moroccan suppliers to Russia and India.

Besides the new plant at Tangier, Renault has a smaller, older plant in Morocco: Somaca, at Casablanca. This factory supplies the Logan and Sandero for the local and regional markets. Renault is committed to retaining production at Somaca until 2017, and according to local press reports, it is currently in discussions with the Moroccan government regarding what will happen thereafter. It may be that Somaca will be closed in order to maximise production efficiencies at Tangier.

Meanwhile, in November 2014, Renault launched production at Oran in Algeria. There, it has installed annual capacity for 25,000 Renault Symbols, with the possibility to quickly raise this to 75,000 per year.

Full capacity at Tangier, in its current configuration, is actually 340,000 per year. Over the longer term, the plant’s capacity could be 400,000 per year, but with the additional space (allocated to Nissan) yet to be brought into action, it remains to be seen when this will be fully utilised.

An expanding line-up
Renault Tangier started production with three models: the Lodgy (a five- or seven-seater MPV) and the Dokker, which comes in two formats (a five-seater kombi and a two-seater conventional van). A fourth model, the new Sandero, started production at the plant in September 2013 and is exported to Europe. However, because of its EU tax-free status, the Tangiers plant cannot currently export to those countries which, along with Morocco, are party to the Agadir agreement, namely Egypt, Jordan and a number of other countries across the Middle East; these markets are supplied with Sanderos and Logans from the Somaca plant. It is widely expected that another Dacia model, a city car, will be added to Tangier's portfolio within the next year.

Nissan’s manufacturing plans remain unknown, with some reports suggesting there could be a Dokker with a Nissan badge or that Nissan could decide to make the Evalia van – currently made in India – at Tangier. As well as uncertainty over which models it will make in Morocco, there has been no confirmation from the OEM as to when it will start production there. 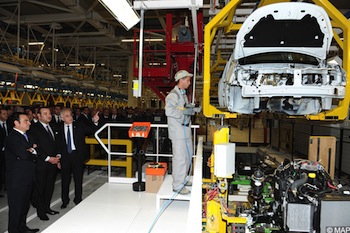 However, once Nissans are in production, a further 60,000 vehicles per year could come out of Tangier, raising total capacity to 400,000 units. When running at full capacity, the plant is expected to employ 6,000 workers, with a further 30,000 Moroccan jobs created in the supply chain.

Although the launches of the Dokker and Lodgy models were initially successful and well received, the uncertain nature of European demand has actually resulted in a small fall in H1 2014 production compared to H1 2013. In H1 2013, Dokker output was just over 32,500 units, but this fell by more than 3,000 in H1 2014; more significantly, Lodgy output fell from nearly 19,000 to just over 11,000. This even led to some reports that Renault would cancel the Lodgy programme, something the Moroccan operation has strenuously denied.

Low labour cost, low automation
The cost of labour is much lower in Morocco than in Europe; not just lower than in France, but also much lower than that borne by Dacia in Romania or Renault in Turkey. Dacia’s monthly labour cost in Romania is, on average, €950 ($1,200), slightly above Renault’s Turkish cost of €925 a month. By contrast, the average Moroccan monthly labour cost is just €350. One of the key consequences of this disparity is the lower degree of automation and investment in capital equipment in Morocco compared with plants in Europe. The Tangier assembly lines are very labour-intensive and there are also far fewer robots in the bodyshop than in a typical EU plant.

The cost advantage which Morocco offers has also played a key role in the geography of Dacia production, specifically the decision to move a large part of Sandero manufacturing from Romania to Morocco. Most of the Sandero production for Europe now takes place in North Africa, with capacity freed up for the Romanian plant to focus on the higher-value Duster SUV and the Logan MCV, including production of right-hand drive models for the UK; these were formerly sourced from the Renault-Nissan plant at Chennai in India.

Despite the labour-intensive nature of much of the work undertaken at Tangier, the factory is a full manufacturing operation, with its own stamping plant in addition to body, paint and trim facilities. Tangier runs three press lines, one of which uses Bliss presses which were originally used at Renault’s Sandouville factory in north-west France.

The press shop produces enough sheet metal parts for the plant to have a minimum of 3.5 days' stock in place at all times; this is in addition to sheet metal parts which are produced for shipment to India and Brazil. Exports of loose parts to Brazil started in Q1 2014, while exports to India started in October, although assembly of these parts into vehicles will not actually start in India until January 2015. Exports to Russia and Colombia will also begin in 2015.

There are two assembly lines at Tangier, both running at 30jph; Line One is dedicated to the Lodgy and Dokker, while Line Two is for the Sandero. All the Sanderos made in Tangier are for export markets, with Sanderos for the local and some regional markets coming from Somaca (which also makes the Logan, again for local and other regional, but not European, markets).

Raising local content
A key issue for Renault – and indeed the Moroccan government, which provided significant incentives to build the Tangier plant – is increasing the local content of the vehicles produced in the country. When Lodgy and Dokker production started, local content was close to 50%, but the introduction of the Sandero caused this figure to fall because of its high Romanian content. As a result, overall local content is now just under 40%. In order to achieve a significant increase, Renault is understood to be considering the production of engines in Morocco; at present, they come from Renault Valladolid, Spain. However, a timeframe for a new engine plant has yet to be confirmed.

Local content level at Tangier will reach 42% by the end of 2014; the objective is 56% by 2016. The Moroccan government has said it would like to see this figure reach 65% by 2020. Raising the local content will take place in parallel with re-designs and mid-lifecycle upgrades for the Dokker and Sandero, plus re-sourcing of components. 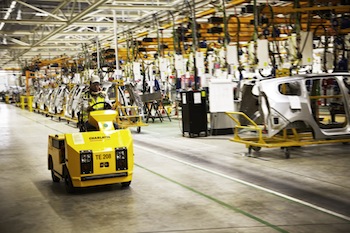 To help meet local content targets, Renault has encouraged suppliers to locate themselves in Morocco to supply directly into Tangier. There is also some in-house assembly of components, such as seats, axles and exhausts, and also the painting of bumpers. Most of these tasks are carried out by external suppliers because so far companies have proven unwilling to invest in Morocco for these roles.

At Kenitra, which is between Somaca and Tangier, Saint Gobain has established a new greenfield operation; at Tetouan, to the east, Visteon has built a plant for dashboard and door panel production; and at Somaca there is a brownfield operation dedicated to the Tangier plant – here four existing Somaca suppliers also deliver to Tangier. When Tangier opened, there were 17 major tier ones, including JCI, SNOP and Yazaki (and the others mentioned above) operating in Morocco. There are now more than 20 such suppliers, most of which came to Morocco specifically to supply the new plant.

Two companies, Denso of Japan and Faurecia of France, have operations in the country which supply both Tangier and also factories on mainland Europe. Faurecia, for example, has a major cut-and-sew operation for seat covers in Morocco which delivers to Faurecia’s seat assembly plants for a variety of vehicle manufacturers all over Europe.

Logistics optimised from the outset
At Tangier, it was not just the factory itself which was designed from scratch; the supporting in-bound and out-bound logistics systems were also planned for optimal efficiency from the outset. The factory has a direct rail link to the Port of Tangier to ship vehicles all over Europe, while in terms of in-bound logistics, the factory receives at least 15 trucks a day from Europe, mostly from Spain.

Renault’s Valladolid factory supplies engines and other body parts which are not made in Tangier, while Renault Sevilla supplies transmissions. In addition, a number of parts come from Renault’s French factories at Le Mans and Cleon, and these are consolidated in Spain with Spanish parts for onward shipment to Morocco. There are also sea-borne deliveries from further afield; more than a dozen containers arrive on a daily basis from Romania, Turkey and Renault-Nissan group supply points across Asia.

Most of the exports from Tangier go to the EU. In the first six months of 2014, just over 97,000 vehicles were exported from Morocco, of which two-thirds were Logan and Sandero cars; around 25,000 were Dokker vans. The balance comprised Lodgy MPVs, and although volumes for this vehicle have, Renault admits, been disappointing, the vehicle will remain a key element of production at Tangier.