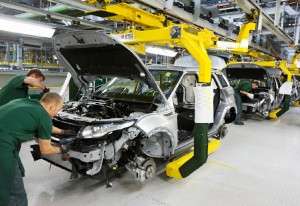 The success of the Evoque and Freelander models has seen a move to 24-hour production at Land Rover’s Halewood, Merseyside, UK plant

In the last couple of years, Halewood has broken one production record after another, with the Range Rover Evoque surpassing all sales expectations; demand for this model from China in particular has underpinned the recent success of this factory which produced its one millionth JLR vehicle at the end of November 2013. Demand for the Evoque – as well as continued higher-than-expected demand for the Freelander – meant the factory had to move to 24-hour production during 2012; despite the Freelander coming up for replacement in the near future, there is no imminent sign that this situation will be reversed.

From Ford to Jaguar... & onto Land Rover
Halewood was originally a Ford plant, having been built in the early 1960s when the OEM expanded beyond its original Dagenham home. The plant had something of a chequered history through the 1960s and 1970s – indeed it was synonymous with some of the worst labour relations in the UK automotive industry at the time. However, unlike Dagenham – which no longer makes cars – and a number of other UK plants which have closed, Halewood has survived and is now thriving.

It switched from producing Fords to Jaguars in 2001 when the X-Type went into production. Notable firsts for this programme included the first diesel Jaguar and the first Jaguar estate. In 2005, the plant began preparation for production of the Freelander 2 (the first Freelander was made at Solihull), with job one for Freelander 2 coming off the line in October 2006. Then, in July 2011, the Freelander 2 was joined by the Range Rover Evoque, a model which has given one of the biggest boosts ever to the UK components supply chain – contracts worth more than £3 billion ($4.9 billion) have been awarded to the Evoque’s UK suppliers since its launch.

Despite this significant sum committed to UK suppliers for the Evoque, the Freelander’s sunroof comes from Belgium and other components sourced outside the UK include wheels, tyres, glass, lights and bright ware such as chrome trim around the door panels and cockpit area.

In addition to its assembly line, Halewood has a substantial press shop which supplies all three JLR facilities, as well as the assembly hall which produces the Freelander and Evoque; more than 50,000 Freelanders and over 100,000 Evoques were made in 2012. During 2013, the assembly lines had been producing around five Evoques for every two Freelanders. Replacement models for both vehicles will also be made at Halewood; there is widespread industry expectation that additional models, smaller than the Freelander and Evoque, will be made there in the second half of this decade.

The Halewood site covers more than 300 acres and employs over 4,500 people (back in the 1960s/1970s it employed over 17,000, albeit with much less automation and far less sophisticated production equipment). Such has been the recent growth of the factory that it can no longer handle all the inbound logistics of components within the factory’s footprint; to overcome this problem, in 2012, the company opened a dedicated £1 billion logistics centre, run by DHL, at nearby Ellesmere Port. Almost all suppliers deliver their parts to the new facility before they are sorted and sequenced for delivery first to the plant, then to the requisite stage on the assembly line. The internal logistics are also run by DHL.  [sam_ad id=17 codes='true']

The only exceptions to this supply arrangement are suppliers which operate close to the Halewood factory, namely JCI (seats), IAC (dashboards and headliners) and Magna Decoma (front bumpers); for these, DHL collects the parts from the suppliers and delivers them directly to the appropriate stage on the assembly line.

As well as volume, the sheer number of options available on the plant’s models has made this new approach to logistics crucial. The Evoque, which has much higher specification and a wider range of options compared to the Freelander, is available in 380,000 possible variations.

Significant investment
JLR has invested more than £230m in Halewood since 2011, mainly for the Evoque. Examples of specific investments include equipment for the company’s first contrast roof spray robot and £5m for an underbody storage system which allowed the plant to move to 24-hour production. The body-in-white shop and assembly lines work 24 hours a day, five days a week, so a storage facility was required for the underbodies made over the weekend; once finished, the underbody assemblies are hung vertically, leading the facility to be known as the ‘kipper rack’.

The press lines
Most of the steel or aluminium pressings used in both vehicles’ bodies are produced inside Halewood, which has a substantial press facility. However, the plant cannot actually make all the pressings it needs and there are four external pressings suppliers to the plant, all of them based in the UK; they are Stadco, Walsall Pressings, Sertec and Presslite. The Evoque, which features a number of aluminium parts (such as the bonnet and roof), also has two major plastic body parts, namely the front wings and the tailgate.

The press shop has 11 working press lines, mostly with six or seven presses on each line; the lead press on most lines has a pressing force of 2,800 tonnes. Around 60% of the output from these machines is used inside Halewood, with the balance going to Solihull and Castle Bromwich for use on other JLR vehicles. A new press line is being installed at present; this will help meet increased demand for both the new models to be made at Halewood but also those to be made at other JLR plants especially those based on the C-X17 concept which will be made at Solihull.

Two of the Halewood press lines date from the early days of the factory; they were actually transferred from Ford, in Detroit, in 1962-63. These are USI Vickers lines and were, in fact, originally built in the UK before being transferred to Detroit, then back to the UK. Most of the other presses in the facility have come from Schuler in Germany.

The press lines are fed by 20-tonne steel rolls from which the steel is straightened and blanks are created. The presses produce around 700 panels an hour (in the process they consume around 125,000 tonnes of steel a year). The new press line is due to produce at a significantly higher rate. All the press lines can produce steel and aluminium, with no difference in their operation for the two metals.

Separate body lines
Although the Evoque and Freelander share a final trim line, they have their own body lines; Freelander bodies are welded using ABB robots, while Kawasaki robots are used on the Evoque line. The welding cells were engineered and installed by outside companies including ThyssenKrupp, Drauz Nothelfer and FFT. One in 200 parts are taken offline for full dimensional checking and if a fault is found the previous 200 parts are scrapped while the equipment is modified to correct the fault.

After welding (and riveting and bonding on the Evoque), the bodies move into the paintshop where they spend between eight and ten hours, including being dusted with ostrich feathers (the Castle Bromwich plant uses emu feathers for this process). There is a painted body store at Halewood which can theoretically hold up to 600 bodies, but in practice a much lower number is typically stored here; in fact, most of the storage is for colour batches which have been painted while the assembly build order is rarely in batches of the same colour.

Fuelling exports
A Freelander or an Evoque comes off the end of the Halewood assembly every 82 seconds. The factory currently ships between 15 and 30 CKD kits of the Freelander to India – each kit consists of a painted body packed in a box along with the model-specific parts; a similar arrangement operates for the XF at Castle Bromwich, which also ships kits to India.