Measure for measure: as vehicle tech advances, so do the test methods

To improve vehicle and component quality, and reduce time to market for new models, testing technologies need to be smarter and faster 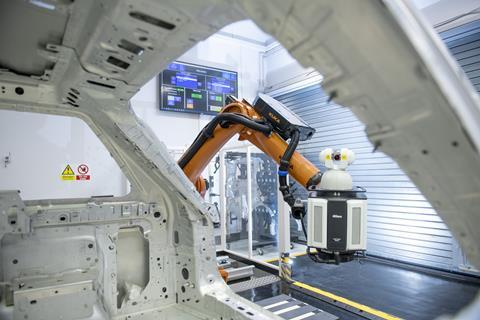 As vehicles become more sophisticated so necessarily do the technologies that are used in testing them. Testing company Element Warren in Detroit US, for instance, is investing $5m in what it claims is a “unique electromagnetic sled”, as part of a strategy to become a world-class centre of excellence for seat structure and seat materials validation. According to William Mangum, business development associate at the company, the installation is an enhanced version of one that was previously built for a European OEM. “We are introducing a new multi-part carriage system into our design, which will allow us to match the carriage size to the part size and therefore achieve larger (higher G) pulses for smaller components,” he explains.

Two key performance parameters for the installation are pulse matching and accuracy. The first of those refers to how closely the sled is able to recreate the acceleration and velocity output from a real-life crash event, which is termed the pulse, and the second to the ability of the sled to match the client’s target pulse in relation to acceleration and velocity. “The purpose of the sled is to recreate this pulse on test samples without crashing an actual vehicle,” states Mangum. “The higher the level of accuracy the better the test data, so for regulatory pulses such as Euro NCAP we are expecting the sled to be accurate to within +/- 0.1G.”

In use the sled is supported by physical guides and propelled by 18 electromagnets that allow for precise increases and decreases in input energy as the carriage moves down the track. A 6MW generator delivers the energy to the sled as needed. 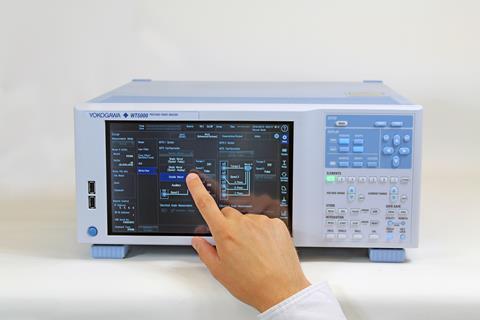 Smart systems for the dummy

Another feature of note is the dummy positioning system, an integral imaging measurement system that allows the measuring and recording of various locations of interest in vehicle coordinates or other parameters. “This system allows us to set tolerances and see the locations’ accuracy in real-time without having to individually probe individual locations as is done with traditional CMM equipment,” Mangum says. “As all points on the dummy are measured and displayed simultaneously, the operator can quickly and manually place the dummy into its target position. With dynamic referencing, output data is not affected by a change in the positioning of the vehicle or measuring device.”

Meanwhile test and measurement equipment supplier Yokogawa believes that its new WT5000 power analyser represents an advance in the capabilities it can provide to developers of electric vehicles. According to Kelvin Hagebeuk, marketing manager – test and measurement for Yokogawa Europe, a key attribute of the device is that its motor evaluation capability can be used to monitor the performance of up to four electric motors simultaneously. Otherwise, he says, given that electric vehicle platforms usually contain several motors, previous generations of such equipment required either sequential use of a single test device or simultaneous use of different test devices. Whichever scenario was involved the implication was the same – that different motors “were not tested under exactly the same conditions.”

“It is a seven-channel device,” Hagebeuk explains. “So, in an assembly with three motors one channel could be used to monitor the battery with the others shared between the motors.” He foresees the device therefore having the potential for a wide range of testing applications – not just early R&D but also for “compliance and performance” testing as well.

Hagebeuk says that the device has been developed in direct response to feedback from the automotive industry. “These are requirements that have come straight from the industry,” he confirms. In fact, he adds that the versatility of its use as a test device also means that it can support different emphases in end-user strategy. For instance, one OEM that Yokogawa has spoken to has indicated that its priority in e-drive development is to achieve the most effective “overall powertrain measurement”, while another is more focussed on the development of a “best in class motor”.

But interestingly Hagebeuk also stresses that the device is a “point solution” that does not attempt to be “a complete solution out of the box”. Instead it focusses on such aspects as “high accuracy measurements of the powertrain, harmonic behaviour and the electro-mechanical performance of the motors”. As such the claimed measurement accuracy of the device is ± 0.03%, as opposed to the ±0.04% of the company’s previous generation instrument. That level of accuracy might not necessarily be required for every possible application today, he observes, but it does mean that the device offers a considerable degree of future-proofing for possible increases in performance demand whether driven by market forces or legislation.

Gryska explains that sensor data from additional visual systems or higher frequency radars operating in that frequency range with over 4GHz of available bandwidth are necessary to deliver the required resolution and accuracy, an area where typical 24GHz analogue radars often struggle. “With the next generation of advanced driver assistance systems (ADAS) and autonomous driving right around the corner, automotive radar sensors will play a much bigger role to improve driving safety,” he states. 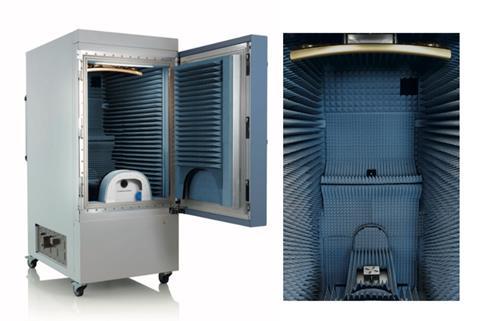 The system has been used by US start-up company Uhnder to develop what it claims is the first digital automotive radar-on-chip product. Gryska says the two companies have collaborated in an initiative to create leading-edge testing solutions for the newest technologies in the automotive industry, especially those that drive progress in the advanced driver assistance systems (ADAS) needed for future generations of driverless vehicles. “The ATS1500C enabled the precise calibration and verification of Uhnder’s new, fully integrated 4D digitally modulated automotive radar-on-chip (RoC),” he confirms.

Gryska explains that Uhnder’s digital radar does what current analogue radar and cameras cannot achieve by it providing a four-dimensional (three dimensions of space, plus time) detection system that processes velocity, vertical angle and height, as well as horizontal angles, at a range of 300+m in any weather conditions. “The ATS1500C enabled Uhnder to deliver the first digital automotive radar using a combination of advanced CMOS and digital code modulation (DCM) technology,” he states. 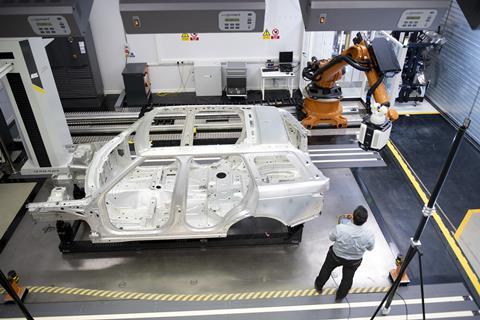 Elsewhere a test installation at one of the UK’s leading automotive-related research institutions is also looking to the future by investigating how the latest sensing and metrology technologies can be fully integrated into manufacturing processes to enable comprehensive in-line inspection procedures. The installation is a robotic inspection system that was set up in the first half of 2019 at the Warwick Manufacturing Group (WMG) at the University of Warwick.

As Professor Mark Williams, head of the product evaluation technologies group at WMG, explains, the installation combines multiple technologies in a way that he is confident makes it “unique in the UK” and at the leading edge of research on even a worldwide basis. A basic factor, he says, is that the robot is mounted on a rail so that it can move past a static vehicle body in order to simulate the situation of a vehicle body moving past it on a production line. But in addition, a twin-column coordinate measuring machine (CMM) is integrated into the installation in order to provide an independent calibration system for whatever sensing technology is being deployed on the seven-axis robot. Hence a proven metrology technology is used to test a new experimental one.

But, Professor Williams continues, the installation has a much more fundamental strategic purpose than just testing out the accuracy of new metrology techniques. That is, he says, to explore how in-line measurement procedures, which are currently limited to a relatively small number of metrology checks because of the time and space limitations imposed by a moving production line, can be made as comprehensive as those carried out in an off-line context.

At present, says Professor Williams, metrology techniques are divided into “two camps”, off-line and in-line. The first of those enables the collection of 3D data that provides a “full characterisation” of whatever is being measured but is likely to require a lengthy period of time and require some sort of dedicated metrology space. In contrast in-line measurement that does not in any way impede the production process involved is practicable but is likely to limited to “maybe just a dozen measurements”.

So, Professor Williams confirms, the installation “aims to explore the possibility for full in-line measurement by evaluating next generation of sensor and measurement technologies that can potentially be used with a product as complex as a car body.” As such it is, he stresses, independent of any particular sensing or metrology technology. 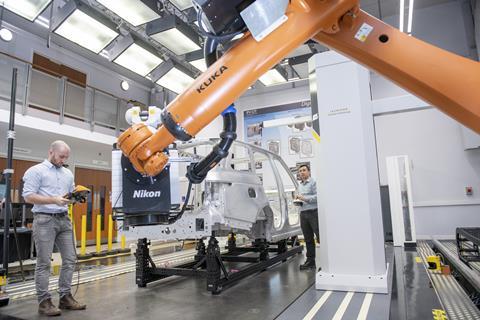 WMG worked with JLR, Kuka and Nikon Metrology to test out the feasibility of using a laser radar system as an in-line metrology technique

The first research project carried out on the installation has involved vehicle maker JLR, robot supplier Kuka and sensing system supplier Nikon Metrology to test out the feasibility of using a laser radar system supplied by Nikon as an in-line metrology technique. Professor Williams says that within the “reference volume” provided by the CMM, which requires physical contact with the vehicle body, the laser radar can generate a “cloud of millions of points” that in turn enable accurate measurements to be made of “hundreds” of specific locations on the vehicle.

“The ultimate aim is to enable a full body programme involving all the datum points including mounting holes and door apertures to be carried out in-line,” Professor Williams states. He adds that though the project focussed solely on a body-in-white application it is entirely feasible that the approach could be used at body complete stage with doors fitted to check gap and flush and could also enable the checking of underbodies.

That initial project has now concluded and its results are currently being assessed and remain for the moment confidential though they are likely to be published in a few months’ time. But Professor Williams indicates that they are encouraging – he describes them as “interesting” – and says that discussions are already underway test other sensing technologies in the installation.