By convention, single-seater cars are machines for the racing circuit but one family business is striving to create and manufacture the exception 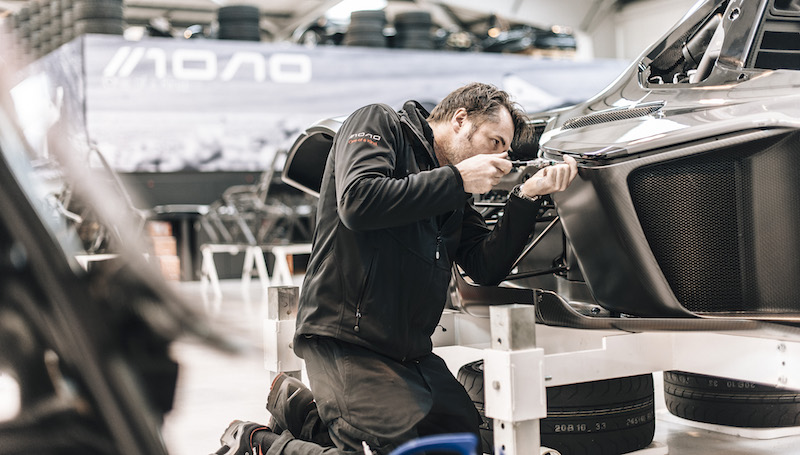 Single seater cars are usually machines for the race track only but there can be exceptions. One of them is the BAC Mono, made by small UK company Briggs Automotive Company, based in Liverpool. The vehicle is a low-slung machine that first saw the light of day in 2011 as the brainchild of two brothers, Ian and Neil Briggs, who still occupy day-to-day positions in the company as, respectively, directors for design and product development.

The machine itself is described by the company as a “road legal supercar” now in its third variant, selling for around £200,000. It uses a carbon fibre composite body around a steel safety shell, though at first glance its most evident feature is probably the contrast between its enclosed front end and an open rear with its engine and exhaust system on view.

Since 2015, BAC’s production volume has increased from three cars a year to three cars a month. At least 75 cars are actually in use

A core feature of each vehicle is that it is built to fit a specific driver, whose measurements are used to define the precise layout of the cockpit – the distance from seat to foot pedals, for instance. Lightweighting is also a core design principle to enable high speeds to be attained without the use of a massive and, in itself, heavy engine. The current version of the car uses a 2.5 litre, 305bhp Mountune powerplant and has a dry weight, depending on options, of just 580kg. Top speed is 170mph and the 0-60mph time 2.8 seconds. The company moved into its current premises (adjacent to the city’s John Lennon Airport – its runways are occasionally used for vehicle testing) some three and a half years ago. At that time production volume was “three cars a year”, now it is “three cars a month”.

Confirmation of those figures is provided by director of manufacturing Rainer Kuehlwein who joined the company at its inception. Like BAC’s founders, Kuehlwein has worked in various other sectors of the automotive industry such as, in his case, Porsche. He says that out of the 27 people employed by the BAC now about ten are involved in direct manufacturing operations.

Unsurprisingly, given those low numbers of people, Kuehlwein confirms that operations at Liverpool are effectively confined to manual assembly procedures involving major sub-assemblies delivered from outside, though a few sub-assemblies are put together in-house. Indeed, the company has more suppliers than employees with the figure for the former standing at around 100 and that for the total number of parts for each vehicle roughly 1,200. The biggest sub-assembly in the car, he says, is the rear end, including the gearbox and rear suspension, though that is one of the few major such elements that actually is put together in-house. The Hewland gearbox in the BAC Mono, Kuehlwein points out, is actually a “structural element” that replaces the chassis in its location. Another major sub-assembly for which BAC itself takes responsibility is the pedal box that forms such a crucial element of the customised ergonomics. In contrast the welded tubular chassis is delivered complete with the aluminium floor already attached. 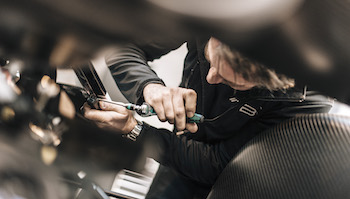 Interestingly Kuehlwein also says that the supplier base charged with the relevant responsibilities, which even includes the welding of the chassis, is overwhelmingly within the UK – well over 90%, with just handful in Germany and Italy. In fact, in a manner that echoes the way that major OEMs have closely located supply bases Kuehlwein further says that about “20-25%” of BAC’s suppliers are very close by in the north west of England.

Single sourcing of parts with responsibility devolved in all cases to just one external party is also standard policy. Kuehlwein says that if the company ever started to produce different variants of the car at the same time then that policy might change to permit similar but not quite identical parts to be sourced from different suppliers. But he is adamant that otherwise BAC’s current policy is the right one. “We will never source identical parts from different suppliers,” he states. “What we aim to do is get quality levels, delivery schedules and prices right with single suppliers because it would not make sense to do anything else with our production volumes.”

The basic philosophy underlying the construction of that network and the devolution to it of such high levels of work are not likely to change. Indeed the contrary is the case with Kuehlwein indicating that BAC intends to move increasingly towards reliance on external “system suppliers”. But he also stresses that complacency is never allowed to creep in to the situation. “Continuous work and communication” is, he states, a hallmark of BAC’s relations with its supplier base.

A clever aspect of the Mono, as Kuehlwein explains, is that the customisation of the car to suit the physiology of individual purchasers does not require any fundamental re-engineering of the vehicle’s structure – the chassis, most obviously, remains exactly the same. Instead the elements that are altered are internal to the cockpit – the distance from seat to pedals and the steering wheel position.

Meanwhile, the company’s close working relationship with its suppliers is also evident in the option it provides of shaping of the seat to suit individual drivers. As Kuehlwein explains the supplier in this case is UK company Pro-Seat, which specialises in making custom-moulded seats for extreme environments, such as F3 racing. He explains that BAC has a “seat fitting chassis” which uses Pro-Seat’s own patented process which requires the individual in question to position themselves in what is effectively a cushion that adapts itself exactly to that person’s shape before a vacuum system is used to record the details exactly so that a seat that replicates that shape equally precisely can be made.

Moreover, as Kuehlwein is also keen to point out, BAC’s close relationships with its suppliers can also help facilitate real innovation. Just last year, for instance, the company introduced the option of carbon composite wheels for the vehicle developed in cooperation with UK company Dymag. Kuehlwein says, unambiguously, that the wheels which “reduce the weight at each corner by 2kg” constitute a “world first – the lightest 17-inch wheel on the market”. Despite adding some £12,000 to the purchase price for those who choose the option, it is one that has proven popular. There are already “25 sets of the wheels out on the road”.

Apart from the limited amount of sub-assembly work that takes place at Liverpool, Kuehlwein states that work on the cars themselves there starts with what he terms “chassis dress” and “powertrain dress”. Essentially, he says, “we start with a bare chassis, put a tank system in it, add the electrics and front end, then the engine and then the rear end including the gearbox – at that point we can actually start it up.”

All of the procedures to accomplish these stages, Kuehlwein confirms, are purely manual – a mix of physical manipulation of the vehicle elements and manual mechanical fixing of them together. There is some minor use of adhesives in the car, but that takes place almost entirely at the relevant supplier level. “We have what we call a main body – that is the shell that sits on top of the car and there is a sub-frame that is glued to that,” he says as an example. 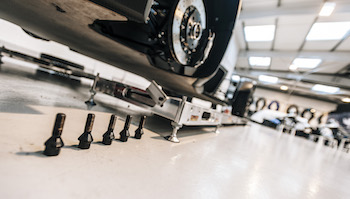 As such the crucial parameter that BAC’s own internal assembly procedures has to achieve is “ensuring the correct torques” on the screw fixings. The most critical of those, Kuehlwein adds, are specified in the build manual, though others are left to the skill and experience of the assembly workers to get right.

Nevertheless it is not an exaggeration to say that the most advanced items of assembly technology involved are “mechanical torque wrenches with electronic readouts”. The individuals out on the shopfloor who use those tools, he says, have all joined the company from the motorsports or premium car worlds and so already have an intrinsic understanding of what is required.

But as an indication of the company’s confidence in its ability to develop its own resources BAC just this year recruited its first ever apprentices on what is intended to be an annual exercise. Kuehlwein says that two individuals came on-board on a 12-month scheme that will hopefully lead to them being recruited permanently next year.

What this enables in terms of actual production schedules is a lead-time for individual vehicles of four weeks. “That is how long it takes from the time we first touch the chassis to when we have a vehicle ready to drive,” Kuehlwein confirms. Demand, though, is such that the waiting time from order to delivery for customers is from six to nine months.

But the popularity of the vehicles will have implications for manufacturing processes. Kuehlwein says that the fact that there are now at least 75 of the cars actually in use is enough to create a sufficient volume of feedback about real, in-use performance to support a total quality management system back at Liverpool. “We can learn lessons from the running fleet that can be used to help enhance production,” he states. 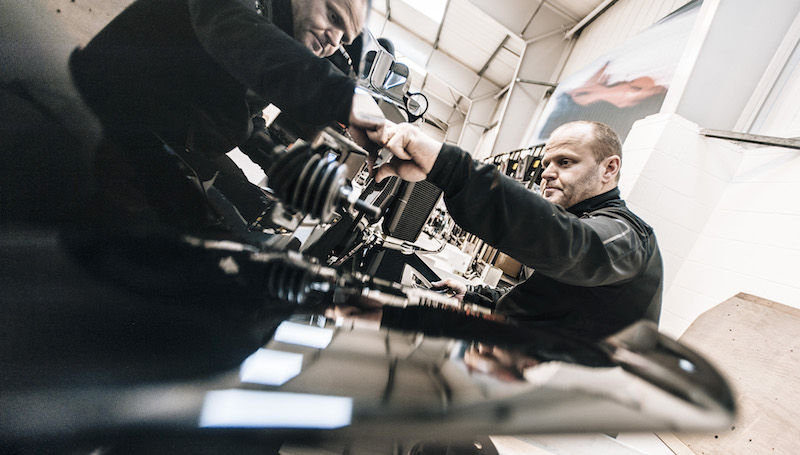 Moreover in order to achieve this objective Kuehlwein indicates that the company is significantly ramping up the level of IT support it provides for itself. Specifically he says that it is now implementing the Fusion Lifecycle PLM (product lifecycle management) system from Autodesk, whose software is already used as the company’s main design tool. A major attribute of the software, he continues, is that is cloud-based so that once the in-house implementation is complete the next step will be to extend the system to include suppliers. “It will improve our problem identification and solving capabilities because all the information will be in one system,” he explains. “Then we can structure it and get a workflow from it according whether it is an engineering or production or supplier issue.”

In fact beyond that Kuehlwein says that BAC is also planning to implement another cloud-based software system – the NetSuite ERP (enterprise resource planning) system that is now provided by Oracle. Then, he says, the company will have a completely integrated design, production and associated logistics and business management capability on which to base its further development. The target date to complete all that is 12-15 months from now. Where the company itself will go from there remains to be seen, but what is certain is that the cars it makes will continue to catch the eye in a way that few other road vehicles can match.