Eaton and Cummins venture forth

To face an ever-widening array challenges, automotive manufacturing has seen numerous instances of partnerships, alliances, mergers and acquisitions entered into as a means to stay healthy 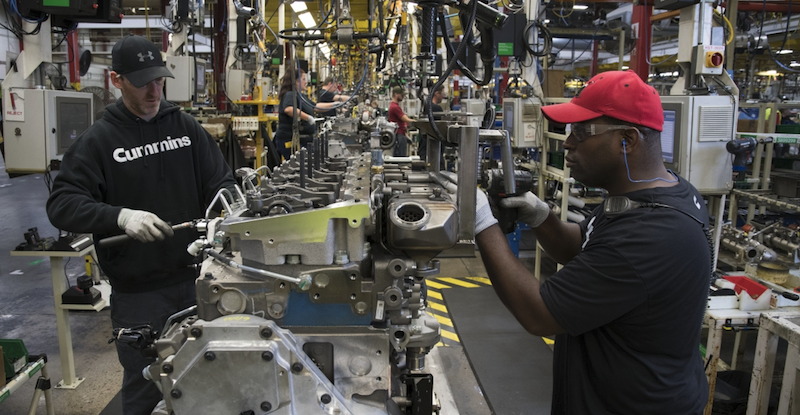 Back in 2017, power management company Eaton and engine manufacturer Cummins formed a joint venture for automated transmissions for heavy-duty and medium-duty commercial vehicles. It is an example of how leveraging the technical strengths and experience of both partners, each boasting long history and deep industry expertise, helps the transition of suppliers further into this pre-electric age of cleaner, smarter IC engines. AMS speaks to Jeff Walker, director of product strategy and programme management for Eaton Cummins Automated Transmission Technologies, alongside Dave Genise and Rene Cledassou of Eaton’s eMobility group.

Regarding the Eaton Cummins joint venture and the share of output, what are the manufacturing arrangements?

Jeff Walker (JW): The manufacturing for the joint venture today happens in Mexico in an existing Eaton facility, but in a portion of that facility is owned and operated by the JV. So, really, the sourcing happens as before but the assembly happens inside the JV.

Is that for the North American market particularly?

JW: Today, yes. Right now the joint venture products really focus on that because, as you see them here, these are both integrated and sold in North America today for both the medium-duty dual clutch and the heavy-duty AMT. We definitely have plans to grow globally and then we’ll look at the footprints from the two respective parents, see if we can use those or if we need to build greenfield as we go.

Within the divisions is there any particular movement or significant change within the manufacturing footprint of those areas? For example, the eMobility aspect must have seen new steps taken with regard to production?

Dave Genise (DG): At this stage, production continues in those [existing] sites. I think when the growth starts to happen that’s when we’ll have to rethink the production, for sure. A lot of the plants have capacity now but moving forward, if we’re talking 2025 numbers, 2030, the numbers are much, much greater; growth is, what, 20% a year or so for the markets? So we need to keep up with that, but right now they’re all contained in facilities we’re already at.

We hear that the eMobility function was drawn in from various aspects of Eaton. Is there one particular area that was the driver for that? The centre of excellence or the R&D?

DG: A major part of it was the power electronics business that we brought in. There were two particular sites. One was in Tualatin, Oregon; the other was a business we had acquired previously, Martek Power, near Lyon, France. So these two sites did development as well as some production for the power electronics, inverters, EC to DC converters and more. They continue to be our European and US centres for development now and in the future.

So that expertise was already in-house?

DG: That’s right, yes, for PC boards. And also at different facilities as well, some production facilities in Mexico, but the two sites I mentioned, they’re all doing PC board assembly, for example.

You’ve been able, within Eaton, to draw in existing expertise from previously developed lines. So, in terms of designing those lines, was that something you had expertise on in-house or was that a new start for you?

In eMobility we manufacture something like 1.5m conversion products per year. The only change with eMobility is that we are going to put everybody under the same umbrella, which is eMobility. This is the only change. And we focus everybody and every expertise in eMobility. But this experience we have.

Switching back to the IC engines, how do you see the next era? The media gives a lot of attention to eMobility, of course, but there probably will still be an era of ICE and you’ll still be expected to innovate. Do you foresee having those parallel operations or do you expect a shift in the focus?

JW: No forecasted shift from my standpoint. I think a parallel universe will exist here for some time, especially when you think of the regional differences and the speeds of adoption, I think so.

And the subsectors of innovation within both sides?

DG: Maybe a good example is our supercharger business, historically with high powered engines. Then we had a series of programmes with Mercedes and Audi and Volkswagen and small and downsized engines for fuel economy. I think at this point, internal combustion engines will be around for a long time in pretty high volumes in anybody’s scenario, but we’ve moved that supercharger technology to start to support three different areas.

The second example is a diesel EGR [exhaust gas recirculation] pump, so with an electric motor we’re turning the same roots compressor to pump EGR into the engine in a very controlled fashion because now we know revolutions equals rate. And so now instead of an aluminium rotor we’ll probably go to more of a stainless steel. The coatings have to be different, the aggressive acids that are present in exhaust gas have to be dealt with. But in the end it’s a very precise way to dose the engine with the EGR.

So it’s a completely different use of that supercharger. Then, even further in the electrification space, that same supercharger is being used in an oil-less fashion with special seals in an electric motor to be used as an air pump for fuel cells.

We sell really good amounts so far when you consider the volume of fuel cell, but we’re using an Eaton supercharger as an air pump for fuel cells. And again the coatings are reformulated again for that fuel cell so we don’t poison the fuel cell. And we had to redesign the seals to make sure we don’t leak oil out of the gears into the unit, again for the same reason. But all those are in some prototype or in limited production at the moment for the future.

You mentioned the fuel cell air pump – was that a case of repurposing an existing product that used to have one function but adapted within a fuel cell setup?

DG: Right. Different requirements. Electric motor now. No oil. No oil leakage off the seal allowed. A different performance profile too. It’s not such a high pressure machine now.

Your product range is having to diversify evermore to act within the technologies that are coming along – there’s gasoline, diesel, battery electric, fuel cell electric, hybrids. And you’re lining up to meet all of those. There is more to come, and subdivisions of each one of those?

DG: Yes, and I think when you look for adjacent markets for products you start to look maybe with a wider lens now because there’re more opportunities available.