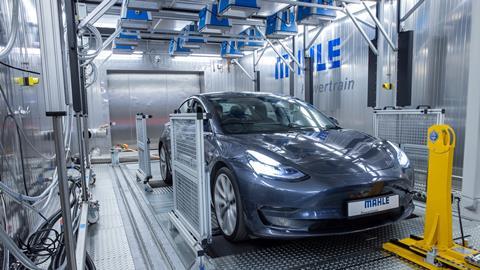 Development and production of new powertrains continues at pace, but robust testing processes are key to ensuring performance and efficiency. AMS visited a newly upgraded test facility to get an insight into the equipment and process requirements for electric and fuel cell powertrains

£5.1m seems a lot to pay for what at first sight looks to be just a sheet metal chamber albeit one large enough to fit a full-sized motor vehicle inside it. But, as Simon Reader explains, a lot more is involved than just capacity. “For a start there is a four-wheel drive dynamometer under the floor plus comprehensive emissions testing equipment,” he says. “There is also a climatic control capability that means the temperature can be brought as low minus 20°C.” 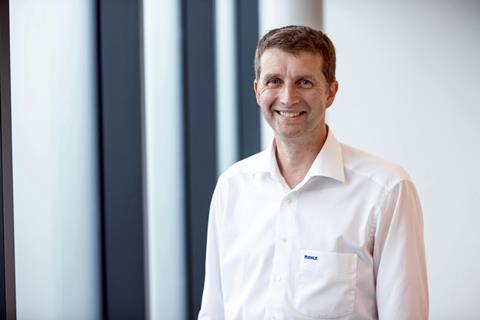 Reader is managing director of Mahle Powertrain in Northampton in the UK, a specialist provider of engineering services that also has operations in the US, Germany and China to support the design, development and integration into vehicles of both internal combustion engines and electric propulsion systems. The subject of his comments is the otherwise blandly named Chamber 2, a completely new test installation commissioned at Northampton within just the last few months.

The chamber is, in fact, one of the latest elements in an investment programme that has seen the company spend around £15m over the past five years to provide it with a powertrain testing capability that Reader is confident is certainly unique in the UK and comparable with anything anywhere else at a global level. That capability is, in part, because of the way Chamber 2 does not merely repeat but instead complements the co-located Chamber 1 commissioned in 2018.

Altitude adjustment
A distinctive feature of that first installation, notes Reader, is its ability to be depressurised to simulate atmospheric conditions from sea level up to an altitude of 5,000 metres. That capability is indicated at the level of even the most cursory visual assessment by its hefty construction and airlock door.

“It is basically a large concrete box from which the air can be exhausted while the car is running,” says Reader. “It is equally applicable for ensuring compliance with legislation or just testing particular performance attributes such as cold starts at altitude.” Depressurising the chamber from the equivalent of sea level to that maximum altitude usually takes about 30 minutes, he adds, to allow for the human ‘driver’ of the vehicle to adapt themself to the change. The humidity level of the chamber can also be varied from 10-80%.

The unique attribute of Chamber 2, however, is not so immediately obvious. The clue is in the shape of its ceiling which is not flat but instead tapers inwards and upwards to a peak with a vent directly above where test vehicles will be located. That is because the chamber has been specifically designed and built to enable it to provide a test capability for hydrogen-powered engines whether as isolated units or in vehicles in addition to other forms of propulsion technologies.

As Reader points out if hydrogen escapes confinement there is no doubt what will happen: “It rises fast.” Hence the geometry of the ceiling which along with the pumping equipment and sensors concealed above it ensures that in the event of any hydrogen escaping it will be detected and safely exhausted to the external atmosphere, while the test procedure is simultaneously halted.

Another feature of the chamber is a demountable array of ultra-violet lamps that can simulate intense sunlight to generate the high end of the variable temperature range. “It can be made to feel like somewhere in the Middle East,” says Reader. The company’s own official maximum attainable temperature figure is 60°C. 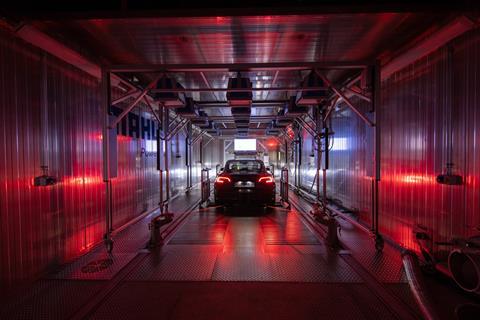 Optimising battery performance
But the new indoor chamber is not the only recent addition to the roster of the company’s testing capabilities. Outside where just 12 months ago was a patch of empty space now stands a new electric vehicle (EV) battery test facility that came into operation in November last year.

It comprises initially four ‘emulators’ - units that can take high voltage AC and turn it into DC that can be fed into and out of batteries. Each emulator can provide up to 250kW of power at a variable rate with just one or all four simultaneously being connected to a battery to provide a power input ranging from a trickle to as much as 1MW. According to engineering director Mike Bassett the latter might simulate the sort of charging rate a battery for an electric hyper car might require.

The batteries themselves will be housed in one of several steel containers each with a capacity of about 5,000 litres under their lid. The containers then provide a closed controlled environment in which batteries can be subjected to repeated charging and discharging cycles under variable temperature conditions to simulate real life use.

“We can feed in cold air to drop the temperature as low as -40°C,” notes Bassett. He adds that integral smoke and thermal detectors provide a warning if the procedure starts to generate any sort of potentially hazardous overheating within the containers and that a final option in such an eventuality is a water quench. A neat touch of environmental efficiency means that surplus electrical energy can be returned to the local power supply grid.

The fundamental objective of all this, says Bassett, “is to produce batteries optimised to a specific application.” Therefore, the start of process is “to look at the application and then come up with the appropriate system requirements and battery specification.”

“We start with pack requirements and the projected usage pattern of the vehicle and then work backwards to look at vehicle performance and factors such as discharge rates,” continues Bassett. “It is harder to absorb power than to discharge it. Cell performance is degraded by exposure to heat so the ability to keep within a defined temperature range while charging as well as discharging is critical.”

Bassett adds that to support its work the company has built up database of battery cells from manufacturers. He says that cylindrical cells in particular lend themselves to the sort of variation of modular design that the company hopes to achieve. “Their smaller form factor gives greater control of final pack configuration,” he explains. In contrast prismatic cells mean larger sub-units with correspondingly less ability to fine-tune the details of pack geometry.

Simon Reader has no doubts about what is driving the automotive industry’s need to have facilities like those now in place at Northampton at its disposal. “The driver for change is emissions development,” he states flatly. “New cars now always have to be better on emissions performance than their predecessor.” Right now, he continues, achieving that goal almost invariably means “increasing levels of electrification”. Interestingly he also observes that the fundamental strategy involved is not particularly new. The automotive industry came to a recognition that it would need to invest in electrification as a mainstream technology, he states, “ten to twelve years ago”. 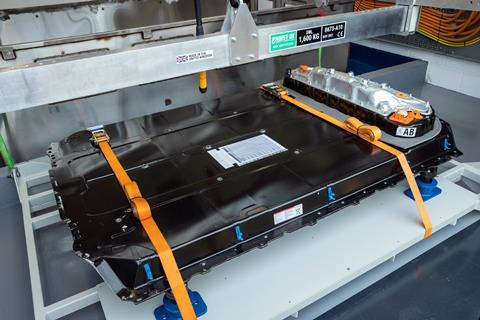 Batteries can be tested to optimise for specific applications

Managing regional variations and shifting trends
But even now the implementation of that strategy is far from being uniform and consistent. In fact, says Reader, there are discernible variations and shifting trends in how the automotive industries of different areas of the world are approaching the issue. “There is possibly a slight backing off from EVs in China,” he says. “So efficient internal combustion engine (ICE) technology is becoming more interesting there. But we are not seeing that in the UK and Europe.” Meanwhile in the US, he adds, there is perhaps “an emphasis on alternative fuels rather than EV technology”.

Hence the fact that Mahle’s investments at Northampton have not focussed on supporting the development of just one type of propulsion system to the exclusion of any other. Nevertheless, Reader indicates that the raft of services it provides do for the moment certainly cater predominantly for the area of EVs and even more specifically battery development.

“We have needed to invest heavily and quickly,” Reader states. “We have chosen to focus on batteries because we felt that is where we could add most value in a way that is customised to the requirements of individual OEMs. Different cars make different demands.” He is confident that the addition of the new facilities means that the company can feel justified in claiming the title Vehicle Development Centre (VDC) for the Northampton site since it can “enable complete battery development projects to be taken from blank sheet of paper to tailored products.”

Creating a multi-skilled team
But providing the company with the appropriate physical infrastructure is only part of the equation. The way it deploys its approximately 160 technical staff is also crucial. As Reader explains the essential elements of its approach involve maximising multi-skilling and versatility while recognising the need for but still aiming to minimise narrowly focussed specialisation.

“We try to spread skills across application areas,” says Reader. “For instance, our most experienced cylinder head designer is also our most experienced battery designer.” But there is still a need for a few “key specialists”. In the case of EV battery technology then detailed knowledge of cell chemistry will at times be necessary though “control engineers are happy to work in either the ICE or EV areas.” More prosaically, he adds, “we have got to have that sort of flexibility because there is no guarantee on the type of work that will come in.”