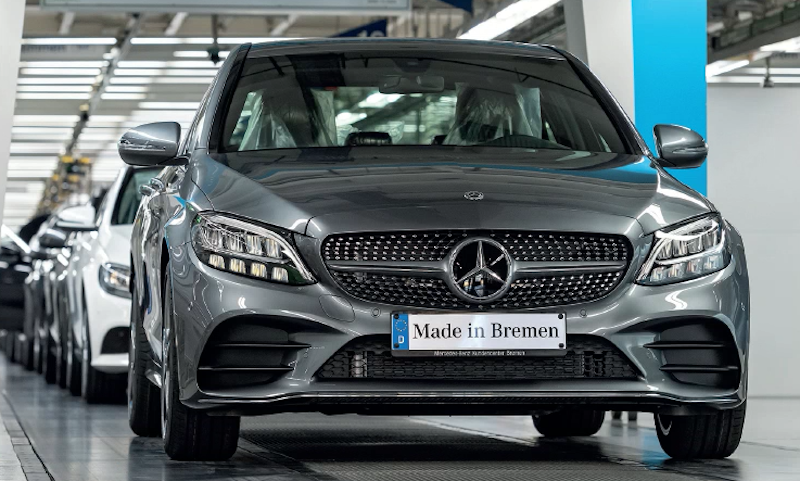 The restructuring currently underway at Daimler is due to be complete by 2020 and the plan centres on creating legally independent AG companies, Mercedes-Benz AG, Daimler Truck AG and Daimler Mobility AG, all of which will operate under the umbrella control of Daimler AG. There are, however, no plans to launch any of the three new entities as separate companies on the stock market.

The new structure will be voted on by shareholders at the next shareholder AGM in May 2019. Daimler Mobility will be the home for all non-manufacturing-related activities, including, for example, the recent acquisition of a 20% stake in Volkswagen’s Heycar, the used car sales portal was launched in October 2017; approval for the Daimler stake is expected during Q4 of this year.

Daimler’s management wants to be much more responsive to market trends than it has been in the past. One example of a new vehicle idea for which it wants to see a rapid market launch is the Urbanetic concept, shown at the recent Hanover commercial vehicle show. Most likely to be part of Daimler Mobility, this is a modular vehicle with interchangeable body units for passenger or goods transport. These autonomous vehicles will be ordered by smart phones and the passenger version is designed to transport up to ten people; these embody Daimler’s wish to have a product of its own to take the fight directly to Uber in the on-demand personal transportation market.

With expanding production in China (albeit with no substantial exports from the country to date) and significant sales from its US plant into China, the US-Chinese trade battle was always likely to have significant impact on Daimler’s finances. In July the company announced its Q2 results were dented by Chinese tariffs on US imports. Operating profit was cut by 30% to €2.6 billion ($3 billion) for Q2/2018, something which Daimler attributed largely to the Chinese tariffs.

However, it is not just Chinese (or possible rises in US) tariffs that are going to hit the carmaker’s results this year. The costs of compliance with the introduction of the WLTP standard (Worldwide Harmonized Light Vehicles Test Procedures) are expected to hit H2/2018 results, while various diesel recalls will also affect the van divisions.These additional costs and challenges come after the company reported a strong first half for this year; global sales for the half-year, for all vehicles, rose 3.3%. Mercedes cars did best, up 3.9%. Moreover, Q2 was reported as the best-selling quarter in the company’s history and in half-one, Mercedes was the best-selling brand in several major markets, notably Germany, France, Switzerland, South Korea, the US, Canada and Australia; it was also the best-selling premium brand in Russia.

Timely launch of van plant in the US

Mercedes has been producing SUVs and more recently cars at its plant in Tuscaloosa, Alabama since the mid-1990s. It has now moved into van production in the US too; its $500m factory expansion was announced in March 2015 and is now fully functional. Currently it employs 900 staff, due to rise to 1,300 by 2020, as well as creating at least 600 jobs in the local supply chain. To coincide with the opening of the factory, Mercedes announced that Amazon was purchasing 20,000 Sprinters for its Delivery Service Partner Program.

The Sprinter plant at North Charleston has undergone a major switch from semi-knocked down (SKD) kits (imported from Germany) into a full complete knock-down (CKD) arrangement. This has involved the construction of a new body and paintshop in Charleston. SKD Sprinters had been assembled since 2006, with the Metris (Vito) added to the SKD line-up in 2015. As with the Bremen plant described below, the expansion of Sprinter production has involved significantly increased digitalisation, the adoption of self-driving transport systems for delivering parts to the assembly line, and a move to paperless digital communications. This includes monitoring the progress of components through the factory with RFID systems. The driverless transport systems, which take parts to the relevant places on the assembly line, can travel as many as 40 miles (70km) in a single shift. All of these improvements allow a much wider variety of van configurations to be made than was possible under the SKD system, with more than 1,700 variants of body type, powertrain, body length, payload, cargo space and options now possible.

At the top of the range, and in the low volume segment, the Sindelfingen plant started making the Mercedes-AMG GT four-door coupe in September 2018, the first four-door version of the GT. This is one of the flagship models allocated to the plant following agreements with the unions on a transformation plan, back in 2014, in which €1.5 billion will have been invested in manufacturing systems in the factory by 2020, making it one of the most productive and efficient factories in Germany. Another €600m will be invested in R&D activities at the site over this period.

Further north, the Mercedes Bremen plant (which has a total annual capacity of more than 400,000 units) has recently started production of the revised C-class, a model that will also shortly begin production in other C-class plants, i.e. Tuscaloosa, US; East London, South Africa; and Beijing in China. Production of the revised C-class makes extensive use of Industry 4.0 techniques, optimising material flows and ergonomics for assembly workers. Pre-loaded carts are delivered to the production line by autonomous transport systems, with all paperwork replaced by mobiles, tablets and PDAs. Bremen is being re-designed to be a paper-less factory.

By the end of 2018, production of the A-class sedan will have begun in Rastatt, Germany (home of the A-class since launch) and at the Nissan plant in Aguascalientes, Mexico. In addition, a long-wheelbase version is already in production in Beijing, exclusively for the Chinese market.

Bremen has a wide global role

Bremen is the largest Mercedes car plant in Europe and is the global lead plant for the C-class, GLC and EQC, and also the sole production location for the SLC, SLK and E-class cabriole and coupes. Although pre-production of all Mercedes cars takes place in Sindelfingen, Bremen quickly assumes a key role once problems identified in the pre-production phase have been ironed out. For the C-class (also made in the US, China and South Africa) and the EQC (which will definitely also be made in China, and possibly elsewhere in the long term), Bremen is responsible for planning the capacity to be installed and production volumes to be made at the other plants, coordinating the delivery of components to the satellite plants and training key personnel from these plants. Key workers from the satellite plants come to Bremen for 4-6 weeks, to learn how to make the new vehicles; they can then go back to their own plants, where the same assembly equipment is installed, and train local workers. Bremen management maintains contact with satellite plants via daily phone calls, and at least once a year, senior executives from Bremen visit each satellite plant for a week at a time to see how things are going on the ground.

Electric range coming to the market

In early September of this year, Mercedes formally announced the first vehicle in its new electric EQ series. This model, called EQC, is a crossover SUV built on a modified version of the MRA platform used for the C-class. However, the EQC has around 85% unique part content, notably the two asynchronous electric motors, one on each axle. EQC will have a driving range of more than 450km and will first be built in Bremen.

The EQC’s lithium/nickel/manganese/cobalt oxide batteries come from Mercedes’ own battery plant at Kamenz in Germany. The batteries are housed in a structural aluminium housing weighing 100kg which has been designed to be crash-proof. The batteries themselves consist of six modules, with two sets located in front, two in the middle and two (one on top of the other) at the rear. The first vehicle will be known as EQC400 and will have a Mercedes’ established 4Matic all-wheel-drive system. Further production in Beijing should begin in 2019, with production also expected at Tuscaloosa in the US.

In the long term, EQ models are also expected to be made at Kecskemet in Hungary, at the German plants, Rastatt and Sindelfingen, and at Tuscaloosa in the US, although there has been no confirmation as to which models will be made in these plants yet, nor when production will start.

Mercedes is not confining its EV expansion to Europe and other developed markets; for example, it is heavily involved in the development of the EV charging network in Thailand, with 200 recharging stations already in operation. in fact, around 40% of its sales in Thailand are plug-in hybrid vehicles, and Mercedes’ own recharging stations are a direct response to this trend. Use of the charging stations, many of which are in hotel car parks – is free for Mercedes owners.

The highlights of the Mercedes new model programme in terms of models yet to be officially announced include the following:• A GLB (sitting between the GLA and GLC) due in late 2019; production is expected at the Nissan factory in Aguascalientes in Mexico• A C-class All-Terrain, essentially a C-class with a slightly raised height and four-wheel-drive, to give Mercedes a competitor to the Audi A4 All-road; a similar E-class All-Terrain is also expected• A new SL in 2021• A new GLC in 2023• And a version of the Nissan-derived X-class for the Chinese market, due in the early 2020s

Production of the GLC (the SUV based on the C-class) at Bremen and at contract manufacturer Valmet is unable to keep up with growing global demand. In an intriguing move – especially in the light of President Trump’s actual and threatened tariffs on imported cars – Mercedes will import GLCs to the US from India. This follows Ford using India as the source of US sales of the EcoSport small SUV. The first Indian-made GLCs will arrive in the US in October, and given that the GLC is the best-selling luxury compact crossover in the US – and the best-selling Mercedes model in the US – Mercedes must be supremely confident of the quality of its Indian made vehicles, and that it will not face any reactive action from President Trump.

Currently US-bound GLCs come from Bremen in Germany and it is not clear if all or just some of US demand will be supplied from India. Shipping vehicles of from Pune to the US is thought to be higher than from Bremen, but labour costs, especially, mean that unit production costs over all are much lower in India than in Germany.While Mercedes will import vehicles into the US from India, it is wary of US political strategy and has to take this into account in its broader business activities. This is especially true in Iran, where US sanctions mean that Daimler has decided to stop its modest activities in the country. In early 2016 it had established a joint venture to make and sell Mercedes trucks in Iran, but this programme has been stopped and seems unlikely to be revived any time soon.