Hand-built but high-tech, the 918 Spyder is made in a specially adapted production area at Zuffenhausen 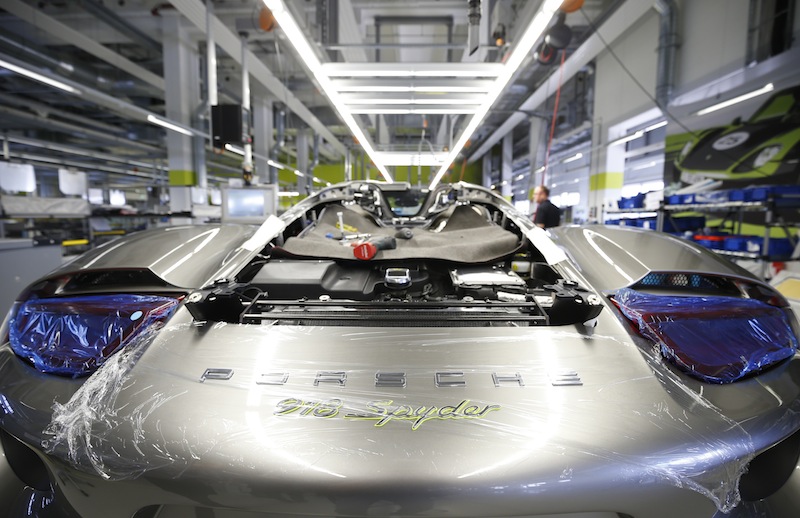 A space that formerly housed a paintshop and presents numerous logistical challenges might not sound like the ideal setting to hand build a hybrid supercar, but Porsche has created just such a production area. The space has a name, 'the Manufactory', and has been refitted to produce the company's ultra high-tech 918 Spyder. But this is not intended to be just another production line; the suggestion is that this is as much about a concept – creating a special manufacturing environment – as the car itself.

Difficult logistics are not unique to the Manufactory. During AMS' visit, our guide highlighted an issue common to legacy production sites located in large cities: a lack of  space to expand. So when a new paintshop was built at Zuffenhausen, the space formerly occupied by the old one was quickly put to good use. The logistical challenges come from the fact that the 918 operation is divided over two levels with all the parts and materials needed being stored below the production area. These are delivered as complete kits via lifts to the sub-assembly sections on commissioning carts ready for the teams to assemble. This sub-assembly area covers about half the 918 production area, delivering assemblies in a sort of one-sided herringbone layout.

Balancing design & production
One of the aspects of 918 production which make it such an interesting study is that the car was designed with a great deal of thought about its production; not that the design was compromised, more that the approach to its manufacture had to meet special criteria. It should be pointed out that the very low volume of production – just 918 units – allowed for a far more indulgent use of materials and production processes than with other vehicles. The two areas that exemplify this are the 'saddlery', where the leather trim is skillfully applied to the interior parts, and the engine assembly area.

For me, this was a first to see leather trimming at the line side. The steering wheel and seats are supplied ready covered, but the trimming team covers all the other leather-trimmed parts. The commissioning carts have a complete set of trim parts for each car; the particular colour of the leather ordered by the customer is then applied at various workstations.

One operation in particular highlights the attention to detail that is applied in the production operations: the stitching of the leather on the sun visors. The leather covering on each pair of visors is hand stitched, taking around 40 minutes to complete the 200 stitches required. This and the other trimming operations are hugely labour intensive but almost impossible to automate. Although it is an artisan process, the operation is highly organised; workers complete the trimming at specially designed ergonomic work stations, using specialist tooling and custom-made jigs and work-holding rigs.

Labour-intensive is a term that can be applied to the whole 918 build. The expert team of 100 is drawn from the production areas making the company's iconic 911, Boxster and Cayman models, so the competencies needed for the 918 were already available in-house.

The engine assembly is another area that stands out. Each of the V8 units is hand built in the Manufactory, with a single operative performing all the assembly operations – following the engine though each station in the engine assembly area. Again, the commissioning carts hold the complete kit of parts for each section of the engine build. With high-volume engine assembly, it is common to see some degree of automation or parts such as the cylinder heads supplied ready assembled, but here these elements are put together at the line side. 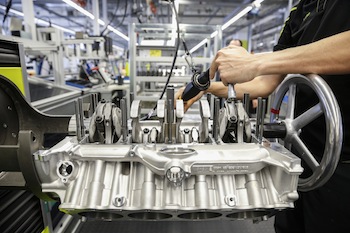 The complexity of the operation is revealed by the sight of the inlet and exhaust valves with associated springs, stem seals, retaining collets, etc all laid out ready for assembly, with the operatives meticulously fitting and checking each part. The finished engines are then 100% cold tested in the Manufactory before being sent over to the main powertrain facility at Zuffenhausen, where the units are hot tested then returned for installation.

Like many OEMs, Porsche extols the virtues of lean manufacturing principles, and while this might seem at odds with the hand-build ethos running through the production area, making the 918 is indeed a lean operation. Going back to the logistical challenges, parts storage is limited, so a very efficient supply flow is required from the external suppliers. Even given the low production volume, the in-hand parts supply is limited. In addition, all components have to be very carefully stored and manoeuvred to avoid damage or defects.

A complex build
The 918 build really starts with the carbon-fibre monocoque. These are supplied by Austrian composites specialist Mubea Carbo Tech and are initially mounted on a special lift truck that allows the structure to be raised, lowered and rotated as required by the workers. At this first stage, wiring looms, electronic control units, pedal boxes, braking systems and additional non-carbon crash structures are fitted to the chassis.

The team of operatives works in synchronised fashion, carefully fitting each part. Watching this process, it is easy to see the high level of care and attention that goes into the build of this complex car, with checks taking place at each stage. The dashboard is assembled at the line side then fitted to the monocoque. The final stage in this section is the installation of the windscreen – conventionally a process performed by robots that apply adhesive to a screen before it is placed in the chassis aperture. The 918 workers do this by hand, applying the adhesive with an electronic dispenser before manually lifting the screen in place. It is a job that requires some precision – one reason for automation in high-volume production.

All the hand tools are cordless, with the aim being to minimise the amount of cabling needed and to create an uncluttered production area. Closer inspection reveals that these tools are electronically calibrated and monitored via Bluetooth; this lends an essential measure of quality control and consistency, preventing over- or under-tightening of fastenings during the hand-build process.

As expected from a brand like Porsche, quality is one of the highest priorities. On the 918 build, there is an additional, practical requirement: due to the tight packaging of components on the car, they need to undergo a system/integrity check at each stage of the assembly process. The inaccessibility of some parts would require the dismantlement of the car if problems were discovered at a later stage.

Specially adapted AGVs
Once the initial fitting out of the monocoque is completed, it is transferred from the lift truck to an automated guided vehicle (AGV), specially adapted for the 918 by its supplier. Placing the chassis on to the AGV forms part of the build, with the hybrid system’s Bosch battery pack positioned ready for the monocoque to be lowered on to it. The use of AGVs is another element of the Manufactory concept; again no cables, fully adjustable for the correct working height and no need for built-in, floor-mounted or overhead conveyor systems.

With the fuel tanks and other ancillary components fitted, the monocoque is ready for the engine and transmission to be installed. The transmission, supplied by ZF, is mated to the engine along with the hybrid module, which comprises an 115kW electric motor and a decoupler that serves as the connection with the combustion engine. This occurs in a dedicated area at one end of the assembly hall. Once fitted together, they are placed into a carbon-fibre rear chassis; the whole assembly is then bolted to the monocoque. From this point, the car travels via the AGVs along the main assembly line, where the cooling systems, exhaust, steering and suspension, interior trim and the pre-painted outer body panels are fitted. 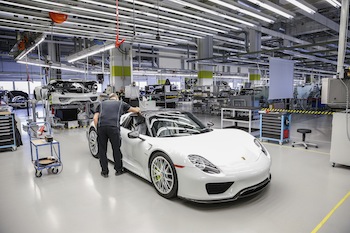 Low-speed, high-quality assembly
Each station has a takt time of 112 minutes, which sounds quite leisurely, but the assembly of the 918 is very complex. Watching the build closely, it is clear that some operations require a good deal of dexterity on the part of the workers – fitting components, pipe work, electrical connections etc into areas with extremely limited space.

Build quality is a high priority and so is safety. The use of high-voltage systems for the hybrid drive requires additional protocols. The station where the car’s electronic systems receive the software download and are tested is cordoned off to prevent anyone getting too close; even the operator avoids contact with the car during the checks.

Not everything is hi-tech. The painted body panels are delivered to the line side in special crates protecting them from damage. To indicate when the crate is empty and a replacement needed, the operative slides a tube on the carrying handle to reveal a red band signifying ‘empty’. Pushed the other way, it exposes a green band for ‘full’.

Final stages involve the setting of the steering and suspension, fitment of the wheels and final quality and system checks. Production of the 918 Spyder will end in June this year when the 4,000 sq. m space for the Manufactory is given over to another role, but the company says that processes and technologies developed for this project can be transferred to higher-volume models. Plus, with Porsche now stating its intent to develop electric vehicles, the experience gained on the 918 will be put to good use.