Manufacturers such as Volkswagen, BMW and Mercedes are now firmly ensconced on US soil

The three European car companies building in the US have contributed as much to revised fortunes in the southern states as any manufacturer. The states themselves certainly paid handsomely for the privilege as the attraction of running a plant not controlled by unions was further sweetened further by dollar incentives.

Figures collated by the Moore School of Business in South Carolina show the $130m offered to BMW to attract it to Spartanburg, South Carolina, in 1992 was trumped two years later by the $253m package to lure Mercedes to Tuscaloosa, Alabama.

By the time VW was looking to build a US plant in 2008, Tennessee was prepared to offer what the local Chattanooga Times estimated was a package worth up to $500m given in the form of free land, tax credits and jobs training, among other things.

By now, manufacturers that have set up shop in the wider south-eastern region of the US include Nissan, Toyota, Kia, Hyundai and Honda. “It’s become the second hub of car manufacturers,” according to the outgoing president of BMW Manufacturing in the US, Josef Kerscher.

BMW now solely builds SUVs in South Carolina after production of the Z3/Z4 roadster was dropped, and has built more than 1.3 million X5s since that model was added in 1999. It now builds the smaller X3 and also the X6 SUV coupe for export to 140 countries. According to Kerscher, 70% of its production is sold outside the US, making the plant the US’s biggest for value of vehicles exported to countries outside North America.

Last year BMW announced a $900m investment in the plant to add the new X4 coupe SUV for production in 2014, boosting capacity to 350,000. That, it said, pushed total investment into the plant to $6 billion. In the first half of this year, it made 167,756 cars, putting it 17th on the list of the North America’s biggest plants.

In Tuscaloosa, Mercedes is investing $2.4 billion between 2010 and 2014, diversifying from its current SUV-only diet of the ML and GL large SUVs, as well as the R-class crossover. In 2014 it will make the successor to the current C-class small executive saloon for the North American market, supplied with four-cylinder engines from Nissan’s Decherd, Tennessee, plant. In 2015, Tuscaloosa will start production of an unspecified new model (expected to be an SUV coupe in the vein of the BMW X6).

Last year the plant made 180,379 vehicles and also began production of kits for the ML and GL, marking the first time they will have been assembled outside of the parent plant in Tuscaloosa. SKD kits will be sent to be built up in India, Thailand and Indonesia. Engines and transmissions are delivered directly via a logistics centre in Germany’s Stuttgart-Untertürkheim plant. It’s one illustration of the plant’s global outlook, another being that the R-class it makes isn’t even sold in the US.

Beginning production in 2011 following a $1 billion investment into the greenfield site, VW Chattanooga makes a US-market specific version of the D-segment Passat saloon and last year made some 177,128. A third team was added last year, boosting employment to 3,330, but the plant still operates two shifts. The plant is angling to win production of a new seven-seat SUV being planned by VW to be built on the firm’s flexible MQB platform.

Production of the brand’s best-selling model in the US, the C-segment Jetta saloon, is carried out at VW’s vast Puebla plant in Mexico, along with an estate version of the Golf and the Beetle.

Mexico is seen as the southern states’ biggest rival for future plants and already Chattanooga has experienced the sting of disappointment when, in 2011, Audi decided not to locate its plant on land near VW’s US facility, but instead build it near the Puebla plant in Mexico.

Ron Harbour, author of the Harbour report on plant productivity, argues that the South is being squeezed from both sides. “There’s not a big move south any more. The last two or three plants announced were in Mexico,” he says. He says the North has become more attractive again now that plants don’t automatically have to become union plants. “Now those northern states are like the southern states that lured plants before,” he says, despite pointing out that wages are still lower in the south.

According to Kerscher at BMW, suppliers in the south have become “more stable, more mature” but the European makers are still at the lower end of local content.

Mexico supplies petrol engines for the Passat and VW boasts that North American content runs as high as 85% for the car. However, according figures reported as part of the American Automobile Labeling Act (AALA), the US and Canada figure drops to 40% by value, with the diesel engine and transmissions made outside North America.

Content for the US-built Mercedes is relatively high at 42-45% given that currently all engines and transmissions are made in Germany.

At BMW, Kerscher claims 60% for both the outgoing and the new X5 for North American content, but again the AALA figure doesn’t rise above 20%, with all engines and transmissions sourced from Germany.

According to Kerscher, who will take over at BMW’s Dingolfing plant in Germany from November, there are no plans to bring engine production to the US. “We have very mature engine plants in Germany and Europe and there is no need to change,” he says. “We have these economies of scale so, for the moment, yes, it’s cheaper making them in Germany.” 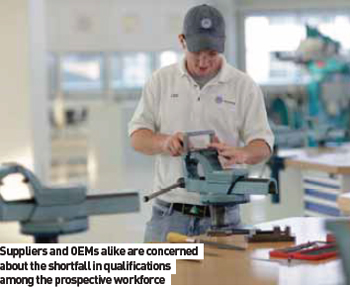 While the sales focus for BMW and Mercedes plants remains global, VW production is very much aimed at establishing the brand as a major player in the US market. Given its overwhelming dominance of European sales, a 5% share of the car market in the US (2.6% with pickups and large SUVs taken into account) must be galling, especially when you’re trailing Hyundai, Kia and the three big Japanese brands.

Certainly mindful of a time ten years ago when a weak dollar saw its German imports contribute to a $1 billion loss in the US market, VW is very much focused on localising for the North American market. In January it announced it would build the C-Segment Golf at its Puebla plant for sale in both South and North America. “Producing the Golf in Puebla, Mexico signals a continued commitment to the North American market and allows Volkswagen to make further strides towards the goal of building more than 75% of the cars Volkswagen of America sells in the NAFTA region,” Jonathan Browning, president of Volkswagen of America, said in a statement. It’s likely to boost production further in a plant that last year made 604,000 cars, which VW described as a new production record.

Sales for VW in the first six months of this year have so far been flat while the market itself has climbed 9%.

One question mark still hanging over US manufacturing concerns the qualifications of the potential workforce.

Kerscher said he had to convince management back in Germany to install a local training program that mirrored the German ‘dual-education’ vocational system that includes hands-on manufacturing experience. “I think the biggest achievement we did is the training and qualification for our management team and production associates,” he says.

“We established a scholar program which is very close to the German apprentices program, which in my view is what makes Germany so successful in manufacturing.”

According to Kerscher this was vital to the success of the plant. “It’s the most important thing. I truly believe, in manufacturing, you can buy all the high-tech equipment, but how successfully you use this depend on the associates,” he says.

The German ‘dual-education’ system also inspired VW’s Automation Mechatronics Program (AMP) at its Academy in Chattanooga, built with $40 million from the State of Tennessee. The inaugural graduate class in August became the first Americans on home soil with certification from the German Chambers of Commerce program, meaning they’re now certified to work in Germany.

However, with only 24 graduates every year the impact will be limited. Across the country car makers and suppliers alike are worried about the shortfall in qualifications.

“AAM is hiring approximately 500 new associates right now at our Three Rivers, Michigan facility. Due to skills mismatch, we are only able to hire one in three applicants for our manufacturing assembly positions, and then find that one in four of the hired associates is unable to make the step to permanent employment.”

He said his experience in China showed him it wasn’t the case there. “Every associate I hired had at least a three-year technical degree,” he said.

His complaint was echoed by Chris Nielsen, president of Toyota Motor Manufacturing, Texas. “The unfortunate reality is that what were traditionally referred to as skilled trades – today called multi-skilled maintenance positions – are ever more difficult to fill,” he told the committee, saying that in his experience only 5% of the candidate pool were qualified. “US students are falling behind the international talent pool, particularly in STEM (science, technology, engineering, and mathematics) fields.”

Speaking to the same committee, the North American head of Bosch responsible for starters and generators, Scott Dahl, said that the firm was pleased to see some states piloting programs along the lines of Germany’s dual-education system but it would take a game-changing national effort to meet manufacturers’ needs. 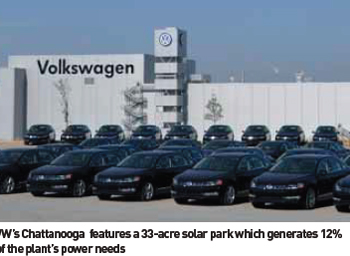 Cashing in on green

Another long-term project for manufacturers is greener energy and in the US the European makers are leading the way. BMW in Spartanburg, along with VW in Chattanooga, are the only two car manufacturers to make the Environmental Protection Agency’s (EPA) Green Power list for on-site electricity generation. BMW is fourth thanks to a landfill-gas-powered generator that the EPA says accounts for 38% of the plant’s electricity needs. The company also runs a fleet of hydrogen fuel-cell forklifts, refillable on site by the drivers, and according to Kerscher the plant has also reduced water consumption by half. He says it’s done mainly to impress the buyer: “The new generation of customer expects that their car will not only be environmentally friendly, but also produced in an environmentally friendly production process. In the future this will be a very important criteria.” But it is also economical: “When you reduce energy consumption by 50%, yes, there is a cost advantage,” he says.

The move to reduce plant consumption and waste is an “undertold story”, according to Ron Harbour. “There are lot of plants making significant advances in terms of plant emissions,” he says. “They’re doing it because it saves them money.” For example, if you have zero landfill there’s nothing to be spent on removing waste. Since Subaru’s Indiana plant was first in the US to be declared zero-landfill in 2004, companies to have proclaimed themselves likewise include GM for its facilities in North America and ten of Honda’s 14 North American plants.

VW in Chattanooga makes the EPA on-site generation list in 15th place thanks to a solar installation that the company calls the largest at a US auto facility. The 33-acre solar park contains 33,600 photovoltaic modules and generates 12% of the plant’s power needs, according to the EPA. 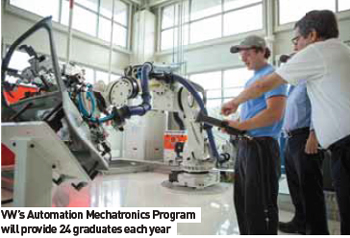 The processes inside the plants are increasingly being scrutinised for energy saving. Ford, for example, is rolling out a less power hungry ‘three-wet’ paint process across the majority of its plants. First seen in the Michigan Assembly Plant where it builds the Focus, the process allows the firm to bake the three paint layers – primer, base and clear – in one hit, rather than baking the primer and baking again once the other two layers have been added. It estimates a saving of around $3m in gas and electricity.

Nissan at Smyrna has included a the same process as part of its paint shop upgrade ahead of the new Rogue C-Segment crossover later this year. In what it describes as the “most advanced paint plant in the world,” energy consumption falls by a claimed 30% and volatile organic compound (VOC) emissions by 70%. The previous paint system had been in place since the plant’s founding 30 years ago, it said.