By Michael Nash, Bi-colour coats and enhanced quality assurance are high on the agenda in the paintshop at SEAT’s Martorell factory. Michael Nash gets an inside look2019-04-29T13:53:00+01:00

Bi-colour coats and enhanced quality assurance are high on the agenda in the paintshop at SEAT’s Martorell factory. Michael Nash gets an inside look

Bi-colour coats and enhanced quality assurance are high on the agenda in the paintshop at SEAT’s Martorell factory. Michael Nash gets an inside look 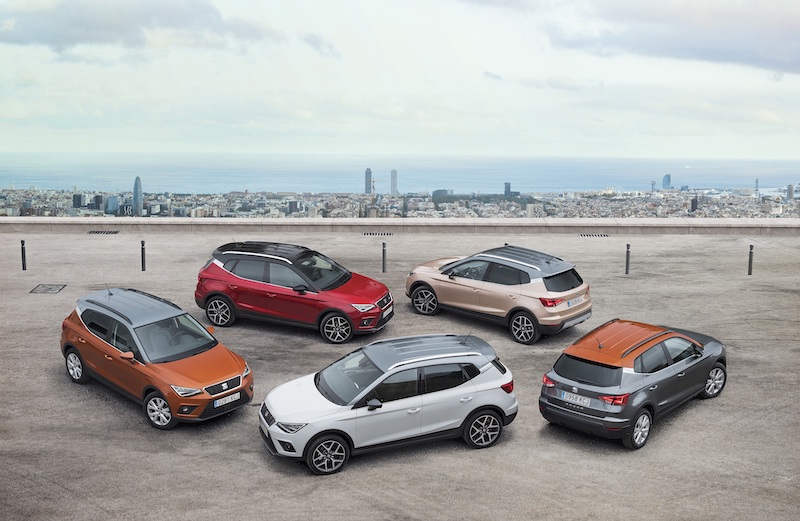 It’s all systems go at SEAT. The company recorded its best ever results in 2018, with sales reaching the highest level since it started operating almost seven decades ago. Turnover has grown by a whopping 33% in the past five years.

The OEM achieved another record in 2018 when it allocated over €1.2bn (US$1.35bn) to investments and research and development. And there are no signs of let up, as president Luca de Meo outlined SEAT’s electrification plans at a special event held in Barcelona. This includes the launch of six electric and plug-in hybrid models by the start of 2021.

The plans could have a significant impact on the company’s base in Martorell, where it makes the Ibiza, Arona, Leon and Audi A1. Some recent changes have been made to the plant, including a substantial €23m investment to automate one of the lines in the paintshop and install a new colour booth for painting the two-tone bodies of the Arona and A1.

Unsurprisingly, Hinzmann believes that the painting process marks the start of the relationship between vehicle and consumer. “I believe that the life of the car body begins in the paint department,” he stated. “Before it you just have a structure of metal. Once you’ve applied paint and bring colour there is emotion and a connection. The first thing you see when you look at a car is the colour.”

The painting process is extremely important not just in terms of vehicle aesthetics but also for durability, he continued. Surface priming is therefore done with great care. “Anticorrosion is really important, and the process of painting can help,” Hinzmann notes. “The coat needs to withstand different types of corrosion. We also deal with huge temperature range, from -45 degrees Celsius to +50. UV resistance is important too.”

A total of 1,123 people currently work in the paintshop at Martorell, 1,051 of which are directly involved in the painting process. “The maximum capacity of cars running through the paintshop is 2,450 per day,” Andre Hinzmann, head of paintshop at SEAT’s Martorell plant, explains to AMS. “We run three shifts and deal with five different models. Two are on the A0 platform – the Ibiza, Arona. Two are on the A1 platform – Leon five-door and Leon ST. And the fifth car is the Audi A1.”

Flexibility is crucial as several models run through the paintshop. This means that the robots must be programmed to suit each vehicle. More are soon to join too, as the OEM recently announced that the Cupra Formentor will be made at Martorell.

Demand for this two-tone effect mainly comes from buyers of the Ibiza or Arona. Out of the 2,450 vehicles that pass through the paint shop every day, around 650 are bi-colour. This, Hinzmann proudly reveals, is a benchmark within the VW Group.

The process of painting the cars in two different colours is tricky. Firstly, the entire vehicle is given a coat in the colour of the lower body. Workers then manually apply masking to the lower half while the roof is then given a second thin coat of paint in a different colour.

“The whole process is very artisanal and requires great care,” Hinzmann observes. He admitted that the masking of the lower half of the body is very time consuming and labour intensive. As a result, the two-tone vehicles take around eight hours to paint – two hours longer than single-tone vehicles.

However, he is confident that the masking operation will be an area of improvement in terms of efficiency in the near future. “At the moment there aren’t any other existing applications that would be viable to paint the cars in two colours,” he said. “But we are doing a lot of different tests in Wolfsburg, and we believe that with a good application we can win something here.”

Painting the roof first could theoretically result in savings as there would be no need to paint the entire vehicle with the colour used only for the lower part of the body. “We did try it this way around,” Hinzmann recalls, “but we encountered a lot of problems. The customer could see more areas of colour overlap. If I showed you a car with the roof painted first you would notice the difference. We soon found that the way we do it now works much better visually.”

The problem of overlap occurs due to the paint running. “We apply less paint to the roof during the first coat because we know we will be painting over it. But we do need a thin layer in the roof in order to give good adherence. If we don’t paint the roof at all we have problems as the paint doesn’t stick,” Hinzmann states.

Two and a half kilos of paint is applied to each car. The same amount is used on all vehicles, regardless of which two colours are used in the bi-colour process.

Although it is trickier and more time consuming, the cars that have the two-tone paint jobs don’t necessarily have more defects that those that only have a single colour. “The main point is to make sure the body is very clean,” Hinzmann stresses. “If we have good cleaning process there should be no additional incursions in the clear coat. We are only dealing with the roof for the bi-colour – it’s a small area. In fact, 95% of the bi-colour bodies are perfect first time without re-working.”

As well as the recent investment in automation and the two-tone paint booth, SEAT recently installed new quality assurance systems. These take the form of large curved “tunnels” that are illuminated with a florescent red light. 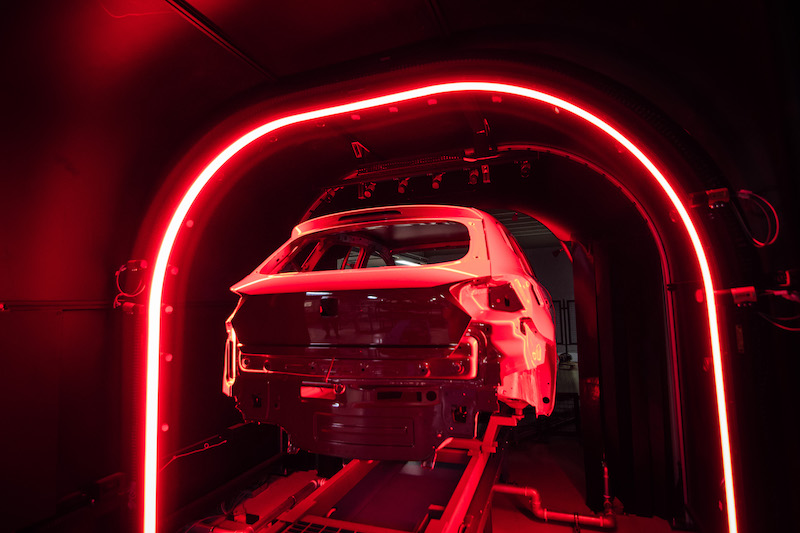 The cars pass through these tunnels at the end of the painting process, after they are baked in an oven at 140 degrees Celsius. Inside the tunnels are six cameras that each take 1,000 photos of every vehicle from various different angles. The photographs are then cross referenced to identify any defects or deviations in the paint job.

“This allows us to find errors much faster, and we have therefore greatly improved our defect rate,” Hinzmann exclaims. “SEAT was the first VW plant worldwide to install this technology in 2016, and then we brought a second tunnel in during 2017.”

Before the systems were installed, a team was tasked with meticulously examining the vehicles after they had been painted. This could take several minutes, but now the scanning process takes just 43 seconds.

The technology has since been installed at other plants within the VW Group. This was only made possible after it was tested thoroughly – a standard procedure across the company to ensure the investment is worthwhile. “New equipment can be very expensive, so we have to completely sure that it works before we roll it out across our production network,” Hinzmann notes.