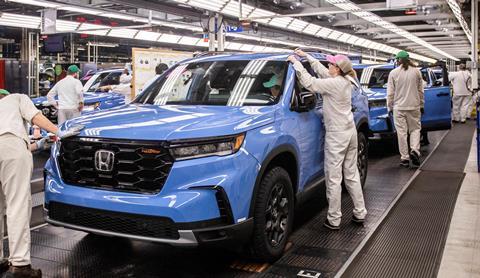 To build the fourth generation Pilot line-up, Honda says its associates at the Alabama Auto Plant (AAP) were challenged with the most manufacturing change points since the first model was introduced in 2003.

While also changing to a new global Honda standard for the flow of assembly processes, new equipment and processes were required throughout the plant, including the engine, weld, injection, paint, assembly and final inspection areas.

To manage these changes AAP established a new training program involving every associate, enabling them to learn the new production flow and master the new processes. Also, welding operations have been expanded at AAP to accommodate production of the wider frame of the new platform.

The new Pilot’s front-end module (FEM) is a “no bulkhead” approach to assembly that enables associates to step into the front of the vehicle and install key components. The FEM is put together on a new, crescent-shaped sub-assembly process at AAP and then installed to the vehicle on the main assembly line after associates have completed various processes inside the engine room. Honda says the FEM results in a major improvement in ergonomics for associates, reducing the number of production processes, while reducing cycle times and promoting high build quality.

Another new process introduced at AAP was the application of acoustic spray foam to enhance cabin quietness and ride comfort in the new Honda Pilot. New robotic equipment in the paint department applies the spray foam to block off hollow body pillars to reduce the transmission of road noise into the passenger cabin.

The new V6 engine is the first major engine platform change in the 21-year history of AAP. So, as engine plant associates learned all of the change points in the assembly of the new engine, they had to maintain production of the original powerplant that will continue to power the Ridgeline, Passport and Odyssey models built at AAP. Solutions included a new sub-assembly process to balance manpower needs between the different engines, and use of color-coded emblems above workstations to identify critical processes to ensure each associate is on the right task.

The press shop also had to adapt processes to meet the requirements for the new model. The new Pilot includes the longest and widest hood ever produced by AAP. In stamping, this required associates to rotate the orientation of the aluminium sheet by 90° to fit it through the stamping press. In assembly, AAP engineers added two hood latches to ensure high levels of hood rigidity.

Also, the larger doors of the new Pilot required steel panels that were too big to fit in the blanking line of the stamping department. So, a secondary process is required to splice together two coils to make the door panel. While other Honda plants in North America outsource door panels when they are too big for the blanking line. AAP engineers modified the door carriers to handle the larger doors, achieving a significant cost reduction by insourcing this process.