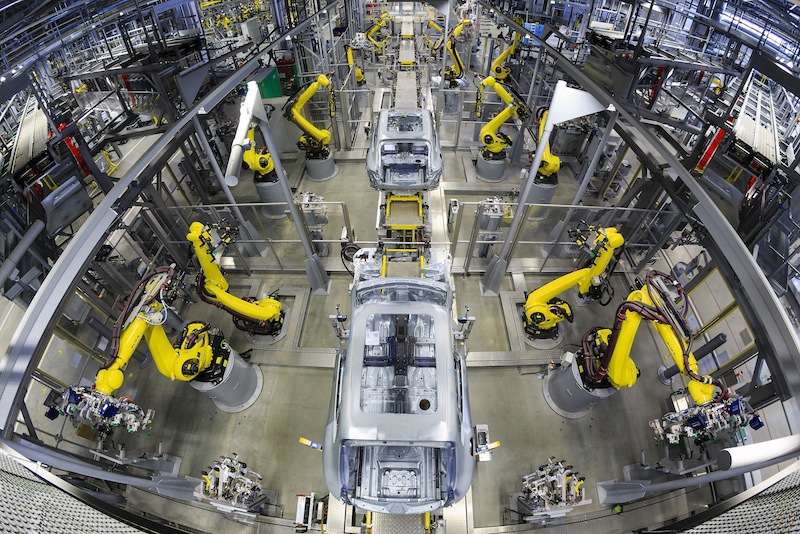 ‘Made in Germany’ has so long been regarded as a hallmark of quality in automotive manufacturing that the use of this tag has sometimes stretched credibility, relying more on final badging than anything else. But ‘Made in Germany’ will be a fair claim for Porsche’s new Macan SUV, following a €500m investment by the premium carmaker to establish a 35,000 sq.m bodyshop and a 60,000 sq.m paintshop at its plant in Leipzig. Having opened in February after a two-year construction period, these facilities will enable Porsche to produce the new Macan without shipping bodies in from elsewhere. Only the pressings will come from external suppliers – and Volkswagen – since there is no press shop at Leipzig; the drivetrains will originate from Audi, VW and Porsche sites.

Porsche Leipzig, established in 2002, already assembles the Cayenne and Panamera, but the bodies for the former are currently sent from a VW plant in Bratislava, Slovakia. The Panamera bodies are made in Germany at VW Hanover; however, from 2016 this model too will be brought to Leipzig, after Porsche has completed the construction of another bodyshop – this one measuring 70,000 sq.m.

At twice the size of the new Macan bodyshop, this planned facility has generated speculation that Porsche will also bring Cayenne production entirely to Leipzig, although the manufacturer will not confirm it. Speaking to AMS, head of technology and assembly Martin Kahmeyer would say only that the larger Panamera bodyshop will be able to accommodate aluminium technologies and that, unlike the Macan-specific bodyshop, it will provide more flexibility to integrate new “ideas”.

Certainly, one of the reasons Porsche selected Leipzig as the production location for the new Macan was ease of expansion. The main plant in Stuttgart already produces the 911 and Boxster, whilst Ingolstadt, which makes the Audi Q5, was also felt to lack the capacity to add the Macan, as well as having highly automated operations that would make the integration of an extra model more difficult. In addition, by bringing the new Macan to Leipzig, Porsche is uniting its front-engine cars.

With ambitions to produce 50,000 of the new Macan each year, Porsche is currently ramping up the volume, having started with five units per day at the end of 2013. In line with a weekly increase in volume, Leipzig is now making 210-250 per day and this will rise to 300-330 by the middle of the year.

Premium quality as standard
Norbert Wagner, head of the Macan bodyshop, candidly describes his new domain as “very standard”, based as it is on a fishbone principle with angled pathways feeding into the main line in the centre. Nonetheless, he says that Porsche expanded the bodyshop by a whole bay for the sake of the Macan’s wrap-around, aluminium bonnet, which requires an oven to cure the adhesives joining its inner and outer sheets. The outer panel for this component is made in Bratislava but carefully reworked at Leipzig to satisfy its special design requirements. Demonstrating that no amount of effort is too much in high-end manufacturing, his explanation is simple: “the customer likes it”.

Radical it may not be, but Porsche’s new bodyshop is certainly modern and high-tech, featuring the latest production systems and built according to sustainability principles. Like the new paintshop and the assembly hall, it uses a paperless quality and control system, which can be used to log faults such as missing studs or adjustments to closures. As regards sustainability, a photovoltaic system has been installed on the roof to generate 800,000kWh per year. There is also a new cooling system for the robotic welding guns that will reduce annual power consumption by over 365,000kWh.

At the time AMS visited in April, line builders were still making final additions to the bodyshop, for example exhaust systems to remove adhesive fumes. The facility was on its first week of three shifts per day, which Wagner described as “a big step for all team members”. Indeed, while the construction process might have been largely conventional, the human aspect of introducing the new Macan to Leipzig was a considerable undertaking.

Staffing, says Wagner, was “one of the biggest challenges” and required the recruitment of nearly 500 personnel for the bodyshop alone; the total workforce at Leipzig has grown from 950 to 2,500. Consequently, Porsche has spent much time and money on training. In addition to external academies operated in collaboration with VW, Porsche has installed special areas for ‘on-the-job’ learning, not only in the bodyshop but in paintshop and assembly. According to Kahmeyer, parts of this training method will now be transferred to Stuttgart.

Heading south
The bodyshop is organised along a north-south orientation and is fed by a new, 10,000 sq.m supply centre with steel sheet metal, plus aluminium for the bonnet and tailgate. Parts arrive from suppliers according to specific cycles in a logistics concept that enables the rapid turnover of pressed products (with around 400 of these required per Macan). At the supply centre, they are electronically logged before being delivered to the bodyshop by tugger trains. 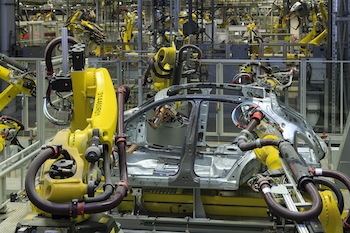 There are nearly 6,000 welds per Macan, with laser welding used for the side walls and roof to prevent any visible joins. The welds are completed by 387 Kuka robots but parts are checked daily for quality in a manual ultrasonic process; according to Wagner, components previously had to be destroyed during testing.

While the underbody and superstructure are being made, the doors, boot lid, front wings and the special bonnet are manufactured in parallel steps, ready for integration into the body at the add-on parts line. The doors and bonnet are mounted in a fully automated process, owing to the tight gap dimensions and transitions between surfaces; the boot lid and wings are fitted with some assistance from personnel. Several times a day, such components are taken out of line for quality checking, for example to measure gaps.

In finishing, the add-on parts are fine-tuned and all surfaces checked for quality. The complete bodies are measured at the last station by a team of four Kuka robots with camera and laser heads. Here, a temperature calibration post helps the robots to account for seasonal fluctuations and ensure measurement consistency. If a quality issue is detected, cars can be moved out of line to a rework area.

Twice a day, a body is selected for a thorough audit in a specially lit room. Under conditions akin to paintshop lighting – “better than daylight”, says Wagner – a pair of workers wearing white gloves feel along the body, manually checking for defects. Just outside this area there is also a black body which is used to demonstrate areas for improvement. The dark shade highlights defects especially clearly, and these are marked with coloured dots indicating the origin of the fault (red for pressed parts, green for bodyshop and yellow for paintshop), plus letters grading the severity. Wagner gathers his team together on a weekly basis to discuss quality issues and arrange any further training that is deemed necessary.

All being well, the Macan bodies are conveyed by elevator and across a small bridge to the paintshop. There are 100 cycles in the new bodyshop, with a cycle time of 154 seconds per station; on the afternoon AMS visited, 111 cars had already been produced against a target of 54, which Wagner said was to compensate for 100 vehicles “lost” to a technical problem the previous day. 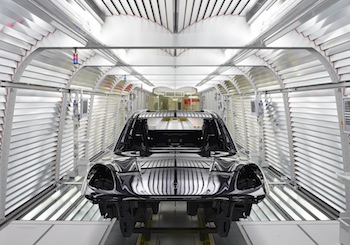 If the new bodyshop is admittedly quite standard, the associated paintshop is billed as “ultra-modern” and “one of the most energy-efficient in the world”. Indeed, Porsche claims that 80% of its heat requirements are met by a biomass power plant located nearby. In addition, the paintshop uses 90% recirculated air courtesy of a dry separator method developed by Dürr, which uses limestone powder instead of water to bind with excess paint particles. There is also an innovative wet chemical method based on an electrostatic separator system that removes solvents. Finally, the light tunnel uses LEDs which are both more effective for defect detection and 30% more energy-efficient than neon tubes.

The paintshop was developed along the lines of the Stuttgart plant in collaboration with Dürr. According to Marcel Förster, a planner in the paintshop, the goal is to paint 30 bodies per hour, although this rate necessarily depends on the output of the bodyshop, which is currently getting up to speed. According to Wagner, one body is being made every three minutes; he adds that while the paintshop could handle 300 vehicles per day, it would be difficult for the bodyshop to produce 200. However, he says Porsche will feed the paintshop with more bodyshops in future.

At the ‘Entry to the paintshop’ phase on Level 1, the new Macan bodies pass through two stations in which the door hinges, engine bonnet and boot lid are securely fixed in place. They are also transferred from bodyshop skids to KTL skids (KTL meaning ‘Kathodische Tauchlackieurung’, or cathodic dip coating).

The bodies then undergo a pretreatment in a dipping tank heated to 60°C in order to remove grease from the presses, welding dust and other contaminants. A zinc phosphating phase follows to ensure optimal adhesion for a later corrosion protection coating; the bodies are dipped but also rotated 360° so that all cavities are flooded. 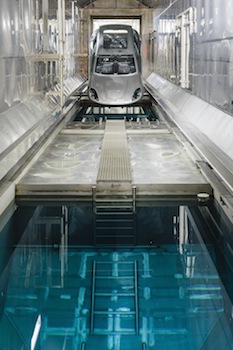 Stage two is the cathodic dip coating (CDC), in which the bodies are protected against corrosion by being dipped in a primer at 33°C, with the paint solids evenly deposited via electrophoresis. Up to four bodies can be immersed at any one time, rotating as they move along to ensure good coverage and again as they are lifted out of the tank so that the fluid drains away before the next phase.

After travelling for 280m during this initial phase, the bodies are turned to progress back down the length of the 360m hall in stage three, the drying phase. The first of four dryers they encounter is the cathodic dip coating dryer, which reaches a peak temperature of 185°C. The bodies are then stored in a buffer area which has capacity for 80 units, where they are sorted by the colour they are due to receive.

Stage four involves the automated sealing of the seams and flanges and the application of underbody protection with special PVC materials. Here, the body is placed on a hangar before being returned to a skid for the primer and top coat.

In stage five, the filler or primer, base coat and clear or top coat are robotically applied using electrostatic paint charging. Although the paintshop has 81 robots, the first station is a wiping shop where workers clean the bodies manually with cloths, taking around six minutes per vehicle and focusing on specific areas such as the doors. The bodies progress through an air gate to blow off any remaining particles before reaching the first robot station, where Dürr robots with saturated brush heads cleanse them thoroughly. In the following stations, small robots hook open the doors, bonnet and boot before larger units with spray heads move in to perform the coating.

Finally, the bodies reach the two Wenker light tunnels which are used to check the finish quality. The bodies are split into two streams, half being checked in one tunnel, half in the other, where the light is reflected in a different direction. A combination of LEDs and adjustable mirrors is used to simulate strong daylight, enabling workers to detect even tiny imperfections on the surface, which are ground down and polished away.

After spending 15 hours in the paintshop, each finished body makes its way to an inline measuring station to be checked, before heading to the 21,600 sq.m assembly hall. The new Macan has required the integration of a third model into the existing assembly operations for the Cayenne and Panamera, including a transition to three shifts and expenditure of €40m on new equipment; and this on top of the establishment of the new bodyshop and paintshop. But justifying that all-important ‘Made in Germany’ tag is surely worth it.