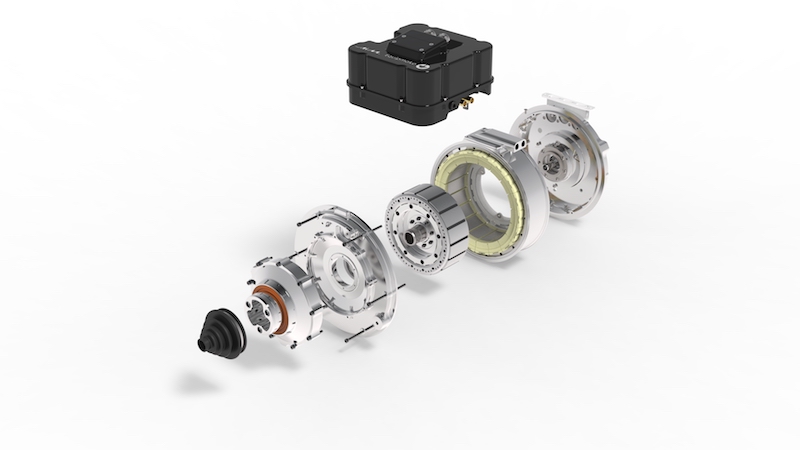 The rise of electric vehicles and the need for new, efficient powertrain technologies has provided smaller companies with the opportunity to establish themselves as major players – particularly as component or sub-system suppliers – if they can offer some genuinely innovative technology. A company that feels it fits that bill is Equipmake, based in Hethel, a few miles outside Norwich, UK.

According to managing director and owner Ian Foley, the company offers is a highly efficient and compact electric motor utilising a configuration in which the magnets are arranged radially like the spokes in a wheel (described as a ‘spoke motor’). He concedes that configuration is not completely new. But where the company feels it is breaking new ground is in the work it is doing right now to ‘productionise’ the design to make it capable of genuinely economical high-volume manufacture.

Equipmake is not a recent start-up. It has been operating for some 20 years since Foley decided to set up for himself after gaining initial experience in the F1 world including a spell with near-neighbour Lotus. A decade ago back in 2007 it laid the foundations for its current activities with its first foray into electrical technology through the development of an electrical flywheel that featured in the kinetic energy recovery system (KERS) used by the Williams F1 team in the 2009 season. “That flywheel was effectively a high-speed electric motor and we learned a lot from it,” he confirms.

The company’s initial product of this type, the APM120, was developed in response to an enquiry from a specific customer and was produced in low numbers so a volume manufacturing capability was not required. Nevertheless, the performance of the device was good enough to gain wider interest so that in 2016 the first prototype of a derivative device, the APM200, appeared. Foley states the aim was to take the performance benefits of the initial device “but to design it in a way that made it capable of being manufactured in volume.” The basic performance figures of the motor are that it weighs around 40kg, can run at 10,000rpm and has peak power/torque of 220kW/450Nm.

Foley notes that the crucial difference between the two devices apart from general manufacturability, was improved in-operation cooling in the newer version. “We don’t lay claim to inventing the spoke motor,” he says adding that “there were manufacturability and cooling problems with existing designs and we have solved those.”

The company has developed a water cooling system says Foley. “We pump water into the middle of the rotor and it is then routed in channels around the outside of the rotor and the back out.” A key enabling feature of the motors is “a rotating water seal”. But another important design factor is that the motor has a hub made from aluminium – a highly thermally conductive material. So, those two factors have been combined in a way that is mutually reinforcing. “We have put water channels in the hub to conduct away heat very effectively,” he explains. That means that the operating temperature of the motors can be kept to around 100˚C, well below the melting point of aluminium.

Other benefits of using aluminium include its relative light weight compared with steel and Foley notes, it’s “easily machinable”. It also allows for the use of cheapest grade of magnetic material – neodymium iron boron – in the motor. Nevertheless, he states, “they are still rare earth magnets.” But, as he explains, when magnets are required to operate at much higher temperatures their material composition needs to be augmented with a further rare earth additive called dysprosium which can significantly add to their cost.

Foley also confirms this approach is now patented. Without giving too much away he adds that at least one aspect of the patent concerns the “detail design of the rotor”, so that it provides sufficient strength to withstand the forces generated by high-speed rotation “even though it is easy to make”. The use of aluminium means that the rotor hub is made by forging rather than the time-consuming and expensive machining that would be required by the use of the conventional alternative of a non-magnetic steel. As such costs, material selection, low operating temperature and ease-of-manufacture are all achieved through an overall design strategy in which they reinforce rather than compromise each other. “It is a kind of virtuous circle,” says Foley.

The company has developed some of its own manufacturing processes to help with volume production. One example is a new way of winding the coils for the motors though Foley says that the methodology has not been given any sort of intellectual property protection but will instead be kept an “in-house secret”. But this is coupled with a pragmatic willingness to buy in off-the-shelf componentry where that makes sense. “We were keen to make use of existing manufacturing technology where possible,” he confirms.

As an example Foley cites the fact that most electric motors already on the market use a radial flux design “so that for things like a segmented stator we can go to existing suppliers and get ones that are very low cost and very high quality.” Everything, he stresses, “is to our design” but wherever possible established, low-cost manufacturing techniques are involved. For instance, he says, “the stator laminations are stamped.” The end result is a motor that on a roughly like-for-like basis is claimed by Equipmake to be “50% of the size and 80% of the mass” of more conventional counterparts. The proviso, Foley explains, is because direct comparison between different electric motors is complicated by the need to take account of whether continuous or full load performance is involved.

The importance of that, Foley argues, is that in order to meet the combined targets for performance and compactness that automotive electric motors must achieve there really is no feasible alternative to the use of permanent magnets. “We have carried out comparisons of our motor and non-magnet counterparts such as induction or switched reluctance motors and whenever we have done so those other motors have ended up about twice the size of ours for the same performance,” he states. Even though such motors may avoid the costs of permanent magnets Foley says that the Equipmake device’s use of the cheapest grades of magnetic material makes that a much less influential factor than it might be otherwise. “The magnets in our device only account for about 15% of the final bill-of-materials by cost so that is the maximum amount you could save for a device that would be twice the size,” he explains. This has all been achieved through a concentrated focus on the use of internal resources. Foley says that though the company employs just 22 people most of them are graduate level engineers and that between them they provide all the technical knowledge necessary to develop the motors. “We’ve got people skilled in mechanical design, power electronics, controls and electrical design,” he states. As such, he confirms, “all the development has been carried out in-house. 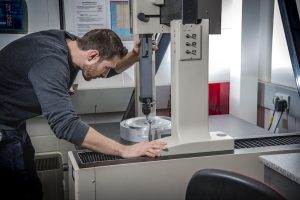 The company employs a team of skilled engineers to support design, development and production of its electric motors

But that development has not been carried out in isolation from real requirements and Foley also confirms that Equipmake has been working with two OEMs in real applications intended for on-the-road passenger albeit ‘supercar’ use. The identity of one of them remains strictly confidential and Foley cannot provide any information about them at all. But that is not the case with the other one, which is Ariel Motor Company based in Crewkerne, Somerset, UK. That company has chosen the APM200 as the main power source for a projected hybrid electric supercar provisionally known as the Hipercar first unveiled last year and due for formal launch next year with full production starting in 2020. In addition, Equipmake has been working with an Argentine bus maker to develop a powertrain utilising two APM200 units for that type of much larger but more sedate vehicle. All three projects, in fact, are due to go into full production round about the same time.

By then, of course, Foley and his team at Hethel will have completed their current efforts to turn the current prototype production methods into ones capable of supporting much higher volume outputs. He envisages that will require a doubling of the current number of employees and the construction of a production facility housing a mix of CNC machining, assembly stations and final testing. In consequence the hunt is on right now for premises that could house manufacturing operations of the necessary scale. Foley says that something in the order of 20,000 sq.ft will be required. He also confirms that the intention is to remain within the local area.

Interestingly Foley adds that in a slight break with the company’s usual in-house practice it has turned to external consultancy service to help plan the projected new manufacturing facility. He explains that it felt it needed some specialist input in areas such as machine layout and process flow. The necessary supply chain, though, is already established and in some cases close at hand. “The suppliers we are using now will be the ones involved in volume supply,” Foley confirms. He says that the supplier for castings is very nearby in Bury St Edmunds while that for forgings is in the UK’s main automotive city of Birmingham. Meanwhile the stamping supplier is “one of the largest in Europe”.

Those three categories of component are, Foley agrees, probably the ones most crucial to achieving the company’s manufacturability targets. In more detail he indicates that castings are used for the motor and gearbox housings, the rotor is forged in two halves and then machined while the laminations for the stator and rotor are stamped. Within the last couple of months, for instance, the company has taken delivery of its first cast housings, replacing the units machined from solid that have been used previously. The immediate aim, therefore, is to assemble a small number of motors using components such as the housings and forged rotors that will be used in volume devices and then carry out appropriate validation testing.

“We are already building a durability test rig,” Foley confirms, adding that perhaps as many as 40 units may be required before the end of this year to support the full testing programme which will also include test routines for shock and vibration, salt spray resistance and thermal cycling. Along with any required subsequent problem-solving those operations should stretch well into next year.

The longer term target, though, is to ramp up manufacturing operations to enable the production of around “a thousand units a year” by 2020. But that figure is only likely to meet projected demand from those first three customers and given what Foley describes as the wider interest the APM200 is attracting he is confident that the company will need to be meeting production targets several times greater within a few further years.