Law and order at Lexus

Its fight for the title of No. 1 global carmaker is putting pressure on the Toyota Production System, but if any incentive were needed for further improvements in quality, it can be found in the Miyata Lexus complex in Kyushu

The Toyota Production System has been the envy and benchmark of the automotive industry for more than 20 years. It’s a system that’s been refined over those years to produce vehicles that are almost bulletproof in terms of quality, built to a standard, certainly in terms of the Lexus brand, capable of competing with the highest of high-end models.

Toyota is now neck-and-neck with General Motors as the world’s number one producer of vehicles and the strain of keeping up with (and indeed overtaking) the General has put pressure on the TPS. Recently there have been some quality issues that do not sit well with Toyota’s reputation. Product recalls in 2006 led to a “customer first” programme that would redirect engineering resources and, if necessary, lengthen development times. Recalls, however, have continued and Toyota is still slipping in consumer-quality surveys. Most of the issues appear to stem from North America and global head of manufacturing, Takeshi Uchiyamada, has expressed “shame” at the problems with the latest Tundra full-size pick-up. Things are going to change at Toyota in order to rectify these faults says the company.

Business Production and sales of automobiles and car parts

Continuous improvement in Kyushu
Toyota takes great pride in its reputation and its production system. Take a walk around the Miyata Lexus factory in Kyushu, around 45 minutes drive from Fukuoka, Japan. Here it’s difficult to believe how anything can slip through the net in terms of quality. The plant is full of examples where the principle of kaizen (or continuous improvement) is in effect: driverless, electric vehicles (EVs) slide silently between the assembly lines and lineside stores ferrying parts and constantly feeding work stations. Those areas which cannot be reached by the EVs are fed by electric trucks whose drivers run (yes run) to ensure bins are re-stocked ready for man or machine to grab and place seamlessly into position as the car bodies pass down the line.

With the Kanban card system and material coming in on multiple carts, the plant uses only about half a day of inventory on the line. Except for receiving and for transport between buildings, there were no forklift trucks handling material in the assembly plant. The assembly line is a model of dynamic but perfectly choreographed activity. Rather than parts being piled up at each point in the line where they are fitted, the fleet of electric vehicles refreshes the supply constantly. If it all goes wrong, of course, there is the ‘andon cord’, the car factory’s equivalent of “stop the train”. When pulled, supervisors appear seemingly from nowhere with the power to halt the line before any error is passed on. If the problem can be resolved in the remaining takt time, the line is started up again. Otherwise, the team leader is called in to help. If the problem cannot be solved in two takt time cycles, the Line Leader is called in. Each defect is systematically measured and logged as part of the ongoing quality audit.

Quality police
Once the car is assembled it has to go through a multitude of quality checks involving a staggering 1,400 items – 200 more than Toyota models. Around 80 people work on some 2.5 kilometres of quality check lines at Miyata. Not only do they make sure that everything works, but check such things as door-closing speed and the sound of the seat and sunroof sliders. Such attention to detail means that, currently, around 30 per cent of the IS sports saloons and RX sport utility vehicles produced here are rejected by the ‘quality police’ and have to go back for treatment. Kenji Washio, Senior Managing Director at the factory, says: “That number is too high and we are working at getting it down closer to 10 per cent. But it is important that we maintain the highest quality.” A lot of the quality checks are carried out by skilled employees rather than by machines. Managers at the factory talk constantly about “craftsmanship”, and they push home the slogan: “we put our entire soul into each and every car”. 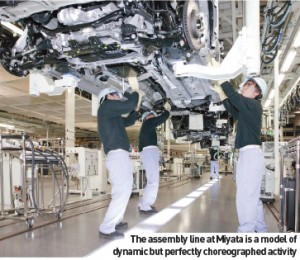 The Toyota Motor Kyushu plant was built in 1991 and makes around 430,000 vehicles a year and now employs a workforce of 8,500 people, with 5,600 on the Toyota payroll and 2,900 with outsourcing suppliers. Toyota Motor Kyushu actually takes in more than one plant. Miyata, which includes No.1 and No.2 plants, and takes in body weld, paint, and assembly units, is fed by a common stamping plant plus plastics, suspension and fuel-tank units. Miyata also includes a hybrid component sub-assembly facility on a site two kilometres long and 850 metres wide. About half an hour away by road is the Kanda engine plant.

The No.1 weld/paint/assembly plants date back to 1992 with production of the Toyota Mark II – known as the Cressida in export markets. The smaller No.2 opened in 2006 with production of the latest Lexus ES, the Camrybased luxury sedan sold mostly in North America. Outputs are similar: No.1 plant produces just over 1,000 cars a day; No.2 makes around 850. Both operate on two-shifts with workers averaging 45 hours a week. No. 2 plant, just a year old, is half the size of the original, thanks to continuous process improvements since the factory was built. These improvements can be seen, for example, in the paint shop, where bodies go through dry ovens sideways, shortening the line length, while fewer presequenced parts are kept lineside, reducing the space taken up by the two assembly lines. Wireless communications allow line workers to know exactly how many of each part to take from a lineside station to install on the vehicle model approaching. 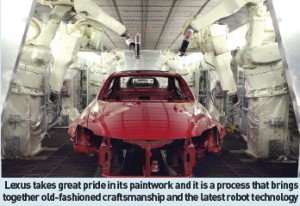 The reason why around 30 per cent of the vehicles made at Miyata don’t get past the eagle-eyed inspectors is more often down to the tiniest of faults, usually slightly less than perfect paintwork, requiring painstaking rectification.

Lexus takes great pride in its paintwork and it is a process that brings together old-fashioned craftsmanship and the latest robot technology. Man and machine come together to produce a fi nish like a guardsman’s boot. Of the 19 hours it takes to build a Lexus, 11 of them are spent in the paint shop to produce a shine in which you can even see the refl ection of the hands of your wristwatch. The cars are dipped, base-coated, sprayed, hand-polished and sprayed a couple more times to achieve the lustre required to pass out the factory gates.

The process also includes water polishing, which is carried out by hand by craftsmen with years of experience. This, says Kenji Washio, is the secret behind the famed Lexus paint fi nish. He adds: “It is actually quite an old-fashioned process, but one which we have retained as it allows us to give the paintwork mirror-like qualities. “Our latest painting facilities guarantee the superb fi nish of Lexus models. The quality of each vehicle’s paint job is assured by measurements for surface feel and lustre.

“The painting process is completely automated and the top quality water paints we use are both long lasting and environmentally friendly. The use of water-based paints creates a clean working environment. At the fi nal stage, safety is guaranteed by comprehensive inspections such as our water pressure check for air-tightness.” Paint-shop staff spend more than three months training to take their place on the line and then it takes many more years to achieve craftsman status. Once out of the paint shop the cars are put under special lights where trained eyes look for imperfections – and around 10 per cent don’t make it. They have to go back through the process.

Innovations on the line
It takes just 19 hours from weld to final inspection to make a car at Miyata. Manufacturing operations are performed in several buildings, include pressroom, welding, paint, assembly and inspection. The welding building contains 480 computerised robots making more 5,000 spot welds on average per vehicle. All the doors, hoods, trunk lids and the like are removed after the paint process, then re-fastened in assembly for easier access during assembly. The entire plant is air-conditioned and almost as clean as an operating theatre as over 2,800 different components are assembled on the painted bodies.

Each of the 11 sections of the assembly lines are about 100 metres long and run independent of each other with a five car buffer between them. This buffer was an employee suggestion to keep portions of the assembly line running when one section was having a problem. Another example of kaizen. Another employee suggestion was the Rakuraku Seat for working inside the vehicle. With stock bins attached, this seat moves with the conveyor line, allowing the operator to swing in and out of the interior while staying seated – and comfortable.

Washio added: “Since beginning production in December of 1992, we at TMK have aimed to make the finest vehicles in the world. In 2005, thanks to the support and co-operation of everyone concerned, we began production of all key units and other parts necessary to the production of hybrid cars. “We also added a second factory which, fusing our latest innovative skills and techniques, manufactures the top-ofthe- line Lexus. We also established the Kanda plant – the first engine factory in Japan outside Aichi Prefecture.” 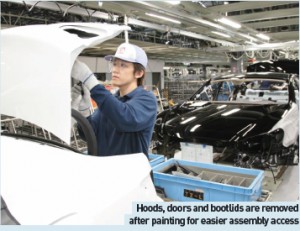 In a clean, quiet work environment, unimaginable in traditional press plants, large press machines use the latest technology in precision moulds to produce high-quality body parts.  Just like the Lexus cars it builds, the TMK factory is incredibly quiet. Along with the EVs all the tools are electrically operated making operations, not only easier on the ear, but easier to control by computer. It all falls under the plant’s ‘clean and quiet’ ethos.

Senior Managing Director Kenji Washio says: “Our latest technology makes it possible to produce an even more precisely fitted body than that manufactured on the earlier GBL [Global Body Line].” “A thorough inspection of our fine quality cars guarantees that surface panels are joined perfectly. To insure the highest quality, our inspection process employs expert inspectors to carefully check all fittings and spacing.

“Our latest production technology and tracing ability enables us to provide the highest quality moulded materials. Our automated industrial machines can perform the highly sensitive processing of main parts such as cylinder blocks. Products are measured and inspected by our expert staff to ensure their quality.”  The assembly plant mounts some 28,000 parts on painted bodies. Washio adds: “We have introduced a moving floor with lifts and an underfloor lighting system. This gives us a well equipped, clean, and easy to work-in environment.

“All finished cars are checked to the highest standards of assembly, fitting and alignment while all engines are checked for performance, vibration and noise before the vehicles leave the factory.” Around 90 per cent of production at Miyata is exported and Washio says that while the Japanese market “has not been favourable”, overseas markets have been strong. Lexus models from the plant are exported to 68 countries: 65 per cent to North America, 10 per cent to Europe 10 per cent domestic market and 15 per cent rest of the world. This attention to detail has allowed Toyota to export its production system, principally to North America, Britain and France. Essential to this has also been a wealth of skilled Japanese engineers, or sensei, who act as team leaders in its factories around the globe.  These leaders are also in demand from other companies, particularly suppliers keen to model their own operations on TPS. Keeping up with demand has led to pressure on numbers of skilled personnel.

Four years ago, realising that there might not be enough sensei to meet its production plans, the Toyota Global Production Centre was established in Japan to speed-up the development of engineers through streamlined teaching methods and training devices. More than 10,000 people have graduated from the GPC and branches are being set up overseas.