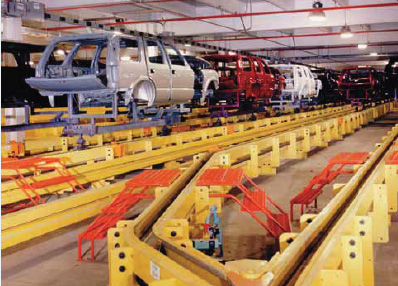 Conveyors can seem a humdrum type of factory equipment - a moving track transporting a load from one place to another within a production environment. The operational variables also seem straightforward – physical size, the load it can carry, continuous or intermittent operation, and location, either on the floor or overhead.

But combine those factors with various possible configurations of the conveyor itself – an ‘endless’ belt track, a sequence of rollers, a succession of jointed slats or a series of palettes – and the number of possible permutations increase.

Conveyors in various forms have been a constant in carmaking since it first became a volume industry. On the plus side they are of proven design and consequently robust and reliable. On the down side, they are fixed installations that are incapable of rapid reconfiguration with inherent capacity limitations. As if to underline their essential nature to the automotive sector, the very core of the production line, the company that supplied the conveyors to Henry Ford’s first factory almost a century ago is still in business. Jervis B. Webb, of Farmington Hills, Michigan, is named after its founder, the person who arguably first saw the potential for conveyors in the automotive industry and who struck that initial deal with Ford.

Noel Dehne is responsible for Jervis B. Webb’s operations in the automotive sector He says that of its $400m turnover in 2007, 40 per cent was derived from its automotive activities. This is approximately half the percentage accrued from sector activity in the 1970s, the figure being diluted over successive decades by growth in parallel activities, including providing conveyors for airports. Still an attractive proposition, the company was bought in 2007 by Japanese materials handling conglomerate Daifuku, making it part of a $2 billion annual turnover company.

Conveyors should be seen as fixtures
Dehne says that despite the fixed nature of conveyors, about a third of the company’s automotive business involves upgrades and modifications to existing lines, meaning that an investment in conveyor equipment is generally a long-term one. Parts can be reused if a production line is remodelled and not just thrown out.

Dehne adds that, as such, it is wrong to describe conveyors as hard automation, in the sense that the hardware is dedicated to a single, immutable operation. Instead, he says, they are fixtures and hence, have an intrinsic degree of reconfiguration potential.

The static nature in the basic design of conveyors is obviously a help in that respect. Dehne explains that some of the company’s products have not changed significantly since the 1930s – there is simply no reason for them to do so. He does, however, identify a change in practise on the part of Jervis B. Webb that reflects its automotive customers’ increasing intolerance of delays and lengthy set up periods for new installations. This has prompted it to do new conveyor installations at its own site for testing and proveout before being disassembled and shipped to the customer’s site for rapid reassembly and commissioning. Like many aspects of contemporary lean approaches, the goal of cutting waste and compressing timescales seems obvious, but it is for the most part a relatively recent practise. Even as late as the 1990s, says Dehne, “everything was done out in the field.”

Conveyors have come under pressure from the rival technologies of automated guided vehicles (AGVs) and a simpler variant, the automated guided cart (AGC). The company sells these under the SmartCart brand. It is quite common for it to be involved in contracts that involve a mix of the two approaches to material movement. Both can be embodied into the same installation, with material deliveries being unloaded onto roller AGVs fitted with small conveyors that then deliver the goods lineside or to a buffer store, from where they can be easily removed and racked.

There are applications where conveyors remain the only option. The movement of vehicle assemblies though harsh environments, such as paintbooths, is a prime example. As Dehne points out, the more delicate mechanics of an AGV could not survive exposure to such conditions, whereas there are no issues involved with a simple conveyor system. Jervis B. Webb was involved in precisely such a project when, in 2005, customer demand for the Hummer H3, made by GM’s AMC General, left the company struggling to keep up. While solving the problem, the fix served to show how conveyor systems can be used to provide some useful, in-line buffering of stock to help ensure that overall production runs smoothly when the process has some potentially tricky asymmetric elements. 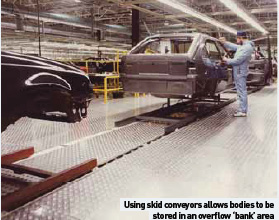 “Shreveport’s paintshop ran at a differential to its general assembly,” recalls Dehne, who was closely involved in the project. But GM had already worked out how it could handle the situation. “They wanted to run their paintshop on a three-shift basis and the assembly on a two-shift basis.” Jervis B. Webb was called in to help, but had little time to ponder the details of the solution. ‘We received the order in September 2005 and GM wanted it completed by the beginning of January 2006,” says Dehne. “We pitched a large $10m system that involved two different kinds of systems – both introduced buffering to deal with the differences in capacity of a paintshop running three shifts and general assembly running two.”

The first system Webb introduced was a substantial expansion to the existing inverted ‘power-and-free’ system, an overhead conveyor with one powered and one unpowered track. Dehne explains that it provided extra capacity for completed jobs going from painting to general assembly and a ‘bank’ area for up to 140 jobs. ‘With the difference in the throughput, the time they needed to add in terms of buffering capacity was at least two hours, which equals approximately 140 units,” he says. “The paint shop needs to be running between 50 to 60 jobs an hour whereas general assembly needs to run about 70 jobs an hour, so this allows the creation of a bit of inventory between the two.”

The other half of the project involved a large ‘skid’ system, a conveyor with a carrier that is basically a square frame with mounts for the vehicle body. Despite the fact that the model Jervis B. Webb installed at Shreveport comprises several different underlying conveyor technologies, the basic system can trace its evolution back to the type of system the company originally made for Ford. “The major difference is in the use of belts and coated rollers, which are quieter and use less lubrication so it’s cleaner for the end product.”

Skid system used as a buffer 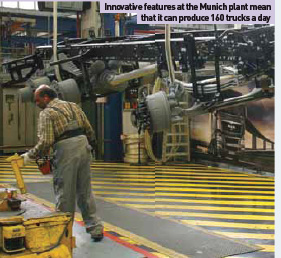 Besides helping to balance the throughput differential between the painting operation and Shreveport’s new bodyshop, the skid system also turned out to be an excellent emergency buffer during production. “If there are problems with the paint system, they can continue to run the bodyshop by putting the skids with bodies on them into an overflow bank,” says Dehne. “It was originally meant to deal with the difference in throughput between the paint and body shops, but if there are emergencies or hold ups they can use it as an emergency buffer.”

Someone else who has close involvement in the use of conveyors in the automotive sector is Keith Hiyama, Vice- President of materials handling specialists Flostor. Hiyama heads up the company’s operations in the automotive sector, with clients including Nissan, Toyota, Honda, GM, Mercedes-Benz and Johnson Controls. One of the highestprofile operations was the GM/Toyota combined venture New United Motor Manufacturing (NUMMI) plant, set up in the mid-1980s near San Francisco, California. One job at the plant involved an upgrade to a conveyor system servicing the output end of a stamping press line. Because the assembly operations run on just-in-time principles, the uninterrupted flow of stamped parts lineside was of critical importance. As such, the requirements for conveyor system reliability and uptime were uncompromising.

High flexibility and rapid cycle times
The system devised by Flostor was quite straightforward in its actual conveyor technology, using a simple ‘dragchain’ arrangement. The conveyor comprises two tracks for empty racks running directly towards the output end of the stamping line, before turning 90 degrees to run parallel with it for loading.

The line then turns another 90 degrees to move directly away, forming a line shaped like a squared-off letter ‘U’, though with the loading line about twice as long as the input and output lines. The conveyor system does, however, change from a two-strand chain for the input tracks to a three-strand version in the loading and output areas to allow for the extra weight of the loads.

The advantages of this setup include high flexibility and a rapid cycle time. The actual travel time for a rack in the system is only about seven to eight seconds, so that the system typically averages two fully-loaded racks every 90 seconds. In other words, conveyor systems, even in discrete ‘standalone’ configurations, can play a major role in large-scale, integrated and highly-demanding production environments. 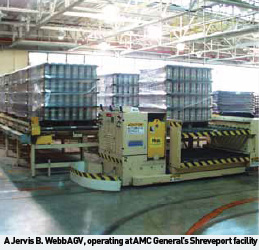 Meanwhile, the demands made on conveyor suppliers in Europe also appear to be placing an increasing emphasis on flexibility. Marcus Hunter is Sales Director for Excel Automation, based in the UK. The company supplies both conveyor systems and AGVs to automotive customers including major OEMs, as well as the aerospace and other sectors. Hunter confirms that retooling and refurbishment of existing conveyor systems is an increasingly important activity, with enhanced flexibility the usual goal. He says that even within the limitation of being unable to disassemble and reconfigure a conveyor system, a lot can still be done. For example, providing there is sufficient floor space, the addition of a few loops can significantly enhance the total capacity of a line. Another area for attention is the operator interface. A simple technique is the use of ‘gullwing’ carriers, with side panels that fold open to allow lineside personnel better access to the interior area. The bottom line, then, is that applying a little ingenuity can mean that a seemingly fixed piece of technology, both literally in terms of its location and metaphorically in term of its own configuration, can be given a surprising degree of versatility to help it keep pace with changing requirements.

MAN Nutzfahrzeuge makes 93,000 trucks and 7,300 buses and bus chassis every year at 14 production sites around the world. At the plant in Munich, Germany, 1,200 assembly workers operate two eight-hour shifts, making 160 trucks per day. That output level is achieved despite a wide product diversity. According to Thomas Meyer, Process Planning Manager, the plant produces 67 different types of vehicle, varying in length from 6.5 to 13 metres. He says that “no vehicle moving down the line is ever followed by one that is identical.”

The production line at Munich comprises 76 separate assembly stations, each linked by a railtrack conveyor system. Takt times for each station are exactly six minutes. The set-up dates back fours years to when MAN completely overhauled its production processes to improve fl exibility and achieve a lowinventory environment. As such, the track follows an S-shaped route that allows all the stations to be accommodated in a preexisting building.

The plant uses a series of improved production techniques. One particular such improvement is on the engine and transmission installation station, where each chassis palette has an attached cart containing all the required components for stations there and further down the line. In fact, a recent upgrade has removed any requirement for restocking the carts as they proceed down the line – there is no line replenishment.

By the end of this year, the company wants to reduce the cycle time at each station to just fi ve minutes, together with reducing the physical length of the line by as much as 30 per cent. Meyer indicates that this is likely to involve an increased use of external subcontractors for some kitting work. But the remodelling of its in-house production processes into a series of discrete assembly cells, linked by a conveyor track, means that further modifi cations should be easy enough to accommodate.