Against expectations, the OEM has built a brand new plant in the UK in order to produce its ‘baby’ Jaguar 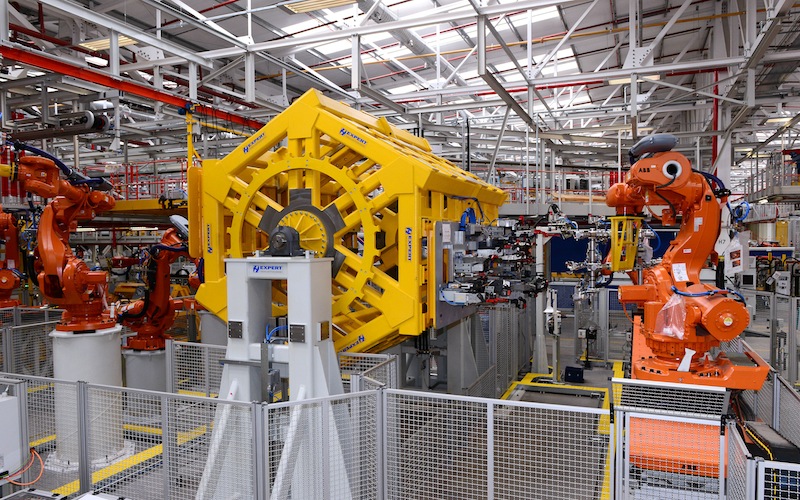 Jaguar Land Rover (JLR) has achieved at Solihull what industry observers said was unlikely ever to happen again: the construction of a new car factory in western Europe. That it is not recognised as such is due to the fact that the 160,000 sq.m facility for production of Jaguar’s rival to the BMW 3-Series, the XE, has been constructed within the bounds of JLR Solihull, the complex which already builds the Range Rover and Range Rover Sport.

That is an impressive feat in itself, given the lack of space at this historic site near Birmingham, birthplace of past British icons such as the original Range Rover and the Rover SD1. But more impressive still is the scale of the brand new bodyshop that will produce the aluminium monocoque for the Jaguar XE from the end of September, as well as for future models using the same all-new architecture.

At an early unveiling of the car at the new bodyshop and assembly hall, attended by AMS, plant director Alan Volkaerts described these facilities as “world-class” and “state-of-the-art”, boasting that the 80,000sq.m bodyshop is the largest in Europe working with aluminum. It would have been the largest in the world, except that former JLR owner Ford decided to go down the same route by using the lightweight material to build its new F-150 pick-up.

The XE bodyshop and assembly hall are separate to those already producing the two Range Rovers and the Discovery but the paintshop is shared. The new plant has an annual capacity of 168,000 units on three shifts and can make a vehicle every 78 seconds. According to Rich McDonell, bodyshop and stampings manager at Solihull, the new factory will start with a single shift “and migrate to three shifts as output increases”.

As explained by McDonell, establishing the new bodyshop involved clearing old buildings including a quality audit area and a logistics lorry park, while the assembly hall was created by the complete refurbishment and doubling in size of a former assembly hall for the original Freelander compact SUV. In total, he said, the bodyshop cost £310m, of which £75m was for the building itself – all part of the £1.5 billion that JLR says it will have spent on the new aluminium platform.

“We are looking at innovative ways to expand capacity. We can't build another of these” – Rich McDonell, Jaguar

Turning to trunnions to save space
Inside the fully automated bodyshop are 613 robots, all supplied by ABB. But very few wield a welding torch; instead, their purpose is to rivet and bond the stamped aluminium. In total there are 456 rivet guns and 48 glueing stations. In support of the robots are eight trunnions, which JLR says are not to be found at other plants. These giant yellow drums were made by Expert Tünkers, and are up to seven metres tall – the largest has been dubbed the ‘Solihull Eye’, after London’s ferris wheel. The trunnions have six sides to better present the bodyshells for riveting by the robots. “That saves a significant amount of space; we would have had to put a lot more fixtures [in] if we didn't have that,” said McDonell.

The trunnions can take three workpieces at a time, with one half loading and the other off-loading. Crucially for the flexibility of the plant, these can be for three different models on the D7A aluminium platform. So far Jaguar has only announced the saloon, but other versions will certainly include an SUV and an estate. The overall speed of work in the bodyshop has been significantly optimised, with the takt time now down to 73 seconds, according to McDonell. That is a vast improvement on the six minutes it used to take to move from one job to another on Jaguar’s first aluminium car, the XJ limo which was made from 2003.

Also streamlined is the number of rivets used per car, down from over 4,000 on the original aluminium XJ to around 2,700 on the XE. Mark White, JLR’s chief technical specialist for lightweight vehicle structures, explained: “Our goal is to rely on adhesive more and more.” The glue has improved from that originally used on the current D7U aluminium-bodied Range Rover and Range Rover Sport, according to McDonell. We're using an aerospace-style adhesive, really strong,” he stated. Baking is required for the glue to set but, cleverly, JLR uses the drying heat in the paintshop to avoid heating the bodies twice.

The aluminium for the bodies is supplied by Novelis, a spin-off from Alcan, which worked with Ford on the original Jaguar XJ. German and Swiss plants plus a recycling centre in Latchford, north-west England, supply JLR’s three press shops for the XE. Solihull makes all the skin panels, nearby Castle Bromwich handles some of the structural parts and Halewood in Liverpool produces the common platform parts.

The goal is for the XE to be made with 75% recycled aluminium by 2020, and White says Novelis is working with JLR to achieve it. “Ideally we'd like a small recycling centre at each press shop so we can process scrap and produce new metal, but that's predicated on volume,” he said. JLR’s use of aluminium is also pushing forward the related joining technology. McDonell boasts that the company’s input has refined the self-piercing rivet guns supplied by Henrob: “We make their solution work".

But there are problems associated with being a pioneer. According to White, there is a lack of standardisation in the industry when it comes to aluminum grades, pre-treatments, lubricants and so on. “With steel, it's pretty much harmonised across all the steel companies. That's not the case with aluminium right now. It’s a bit supplier-specific,” he explained. White’s aim is to get carmakers to co-operate on this matter. “If we can all get together and make sure we've got common industry standards, that can only be good for car companies. So when they need to save weight and move towards light metals we will have already facilitated that and made that happen,” he stated.

The body of the XE is 25% steel, which is used in the rear doors and boot lid. Though made of a traditional material, the boot lid is an example of high-tech manufacturing, treated with laser-brazing because one part of it cannot be stamped. Unlike spot welding, for this process heat from a laser is used to join the two sections, followed by filler.

One-of-a-kind assembly
While the assembly hall for the XE is also new, in contrast to in the bodyshop, it has been built to accept some production of the Range Rover Sport, which will come down the same line despite using a different platform. This makes Solihull the only factory within JLR’s network to make both Land Rovers and Jaguars. “We took a ‘brave pill’ and made that build hall even more flexible,” said McDonell. “Although it was expensive it's been worth it because the demand for our product has been so strong.” This solves JLR’s bottleneck for what is surely its most profitable model along with the related Range Rover, and one that has proven far more popular than the company envisaged.

Very little of the assembly is automated, with only the glazing applied by robots. The hall will thus house the bulk of the 1,700 new employees JLR has said it will hire for XE production, with 500 joining this September. Inside the 81,000 sq.m building are 202 main line assembly stations and 101 subassembly stations. The moving production lines include a height-adjustable skillet system, using bellows instead of scissor lifts. This is important to accommodate the Range Rover Sport, which is much taller than the XE saloon.

Meanwhile, the large off-track testing and inspection area includes 95 bays, and can be regarded as evidence that JLR is serious about burying its lingering reputation for a high fault rate. “It’s something we’ve learned: we need space and time to check and improve quality,” admitted off-track manager Dave Humphries. Part of the process includes a water ingress test that blasts the cars with water at 265 litres a minute to mimic monsoon conditions.

With a capacity of 168,000 units in the new Solihull plant for the XE and related models, Jaguar must be hoping to more than double sales from last year’s figure of just under 77,0000. Given problems in the past with expanding Jaguar, particularly under Ford, the bodyshop and assembly hall look to be future-proofed for the time being on production numbers. If not, the plant will have to go to four shifts (adding a second 12-hour shift at the weekend), according to McDonell, who noted that the options are limited. He commented: “We are looking at innovative ways to expand capacity. We can't build another of these.”