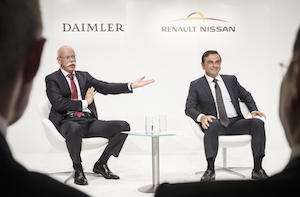 Toyota will complete its takeover of Daihatsu later this year and already effectively controls Subaru. Since 2015, it has also had a wide-ranging technical alliance with Mazda, although without any capital involvement on either side.

Full control of Subaru and Mazda by the largest Japanese car company may well transpire before too long. Ahead of this, Nissan has taken a 34% stake in troubled Mitsubishi by way of a fresh capital injection. This move, moreover, gives Nissan control over key decisions regarding Mitsubishi's strategy and direction. Honda remains independent, as does Suzuki, but the smaller Japanese brands are gradually morphing into larger groups.

It wouldn’t be surprising if the Japanese automotive landscape were soon dominated by Toyota and Nissan, with Honda and Suzuki trailing in their wake. How and why has it come to this?

Certainly, one could argue that there have been too many financially troubled car companies in Japan for too long, especially in a stagnant or declining market. The answer is also partly opportunistic, Nissan taking advantage of its current strengths versus Mitsubishi’s troubles and declining share price.

Meanwhile, Toyota’s control over Daihatsu and Subaru and alliance with Mazda can be seen as a strategy to develop a multi-brand approach along the lines followed by Volkswagen and its acquisition of various European brands in recent times. Daihatsu gives Toyota the minicar brand that it lacked while Subaru’s four-wheel drive and other niche technologies have long been admired by Toyota.

Nissan’s stake in Mitsubishi is also interesting for topical reasons; Mitsubishi had been caught by Nissan’s engineers having manipulated emissions results in Japan. This is somewhat ironic, as the manipulation concerned the smallest (and one could reasonably assume) the least polluting cars on the road. Mitsubishi is not without problems along these lines, having been involved in a series of cover-ups regarding faulty parts in the past.

Regarding the Nissan models which have misreported emissions results, these small kei cars are made on an OEM basis by Mitsubishi; and in fact, more Nissans are sold in a typical year than equivalent Mitsubishi models. Just after the Mitsubishi announcement came news from Korea that UK-built Nissan Qashqais may also have used cheat devices in emissions tests, which Nissan strenuously denies.

Nissan’s solution to the domestic embarrassment of selling vehicles made by someone else with faulty emissions has been to buy the problem, or rather take control of the company. Given the way in which Carlos Ghosn has managed to transform both Nissan and Renault, he is arguably one of the few people in the industry capable of solving Mitsubishi’s manifold problems. Bringing Nissan and Mitsubishi together also creates a potentially combined entity with over 6.5m annual sales. How long it will take for the two companies to become one remains to be seen.

Such a move, especially when set alongside the existing Renault-Nissan alliance, should enable the best of Mitsubishi to survive and benefit from the scale of the Franco-Japanese alliance – provided that news from Korea doesn’t reveal corporate misdeeds within Nissan. Mitsubishi – once planned to become part of DaimlerChrysler – is once again back within Daimler’s sights as a result of the Renault-Nissan-Daimler cross-shareholdings and technological alliances. What goes around comes around, it would seem, especially in the ever consolidating world of automotive manufacturing.