Vadim Sorokin, president, GAZ
GAZ has a heritage that stretches back to the earliest days of the automotive industry, but as the organisation’s president, Vadim Sorokin, readily concedes, its present form and character date to just 15 years ago, when Russian Machines (RM) became the principal shareholder.

That change of ownership became the catalyst first for a complete streamlining of the company’s operations to enhance productivity, and then for substantial investment in plant, people and product development to create a modern and efficient single business. Sorokin attributes much of that to main shareholder Oleg Deripaska, who made sure that the substantial funds subsequently pumped into the company followed a rationalisation of processes based on the automotive industry's informal standard, the Toyota Production System (TPS). Indeed, Sorokin states quite bluntly that without that rationalisation most of the investment would have been a “waste of money”.

As it now stands, the company operates 13 plants across eight different regions of Russia, employing 45,000 people and supporting as many as 400,000 jobs across its supply chain. GAZ's output comprises light commercial vehicles (LCVs), buses, trucks, powertrain units – both engines and fuel systems – and automotive components. It exported products to 33 countries in 2014 – up from 23 the year before. Sales of LCVs made by the company in 2014 totalled 83,616, making it sixth in the European league table of manufacturers of such vehicles behind Volkswagen, Ford, Mercedes-Benz, Renault and Fiat.

The logistics that support these operations comprise around 450 companies, most of which, says Sorokin, are “Russian or located in Russia”. Both vehicle and component assembly at Nizhny Novgorod, and the Yaroslavl engine plant, have “supplier clusters” in their immediate vicinity, but otherwise the geographical spread of the supplier base is comparable with that of the company’s manufacturing sites.

Establishing a ‘war room’
In recent years, considerable effort has gone into enhancing the effectiveness of the company’s supply chain procedures, as well as its own direct manufacturing operations. A key element in this strategy has been the setting up of a single purchasing department for the whole group – a major change of business organisation for a set of operations which, as Sorokin points out, were separate companies before their consolidation into the Basic Element group. This department operates from Nizhny Novgorod, which is the headquarters of the whole set of GAZ operations and where Sorokin himself is based. A key location here is the ‘war room’, as it is known within GAZ, where the company’s staff – and supplier personnel when necessary – meet to discuss key issues of the moment.

Sorokin says this is where all the information on current work with suppliers and logistics is presented, and where appropriate analysis is carried out to increase the supply efficiency. This cross-functional GAZ team consists of production managers, manufacturing technicians, engineers, and procurement and sales managers, all there to solve any problems immediately by engaging the relevant services. 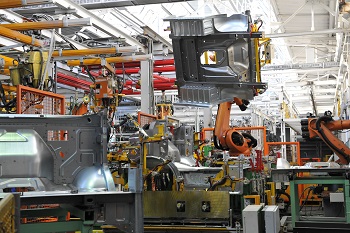 Production issues are quickly resolved using a 'war room' strategy
Standing for action
The characteristic feature of this ‘operations room’ is that there are no chairs, with participants standing in allotted areas around an otherwise empty space – an obvious incentive to reaching speedy decisions. The whole point, as Sorokin observes, is not to talk about problems but, once they are identified, to take “corrective action” as soon as possible. GAZ, he explains, is no exception to the rule that the automotive industry is “conveyor-based” and that anything which disrupts the continuous flow of product along an assembly “even for a minute” is an unacceptable cost.

Nevertheless, a degree of autonomy and devolution of responsibility remains. While purchasing is rigorously centralised, the management of logistics – the timing and volume of deliveries to individual plants – remains with those locations. Sorokin is quite dismissive of any notion that the geographical spread of the company’s manufacturing locations poses logistical problems. It certainly has not, for instance, discouraged GAZ from single-sourcing many elements of the vehicles it makes.

Sorokin argues that, where complete sub-systems are concerned, single-sourcing helps in the drive for consistent product quality, and indicates that in the event of any difficulties with ‘monopoly suppliers’, the company always has other options in reserve. Ultimately, he adds, quality is the paramount factor in supplier selection; there is no question of using Russian sources simply because they are more local.

“We are not focused on utilising in-house assets. We are focused on seizing and maintaining market share" – Vadim Sorokin, GAZ

When pressed on the point, Sorokin concedes that he would like to see “more innovation” from purely Russian suppliers. On the other hand, he makes it plain that the company is willing to support suppliers if it is worthwhile; payment terms, for instance, might be temporarily changed from 60 days to 30, or even to pre-payment, if necessary. Such decisions are made based on analysis of supplier data held in the 'war room'. Sorokin says that GAZ can afford some latitude because the Nizhny Novgorod site operates with “negative working capital”; GAZ gets paid in advance for the vehicles it builds.

Nizhny Novgorod is, of course, highly unusual in that its output comprises not just GAZ’s own trucks but also passenger cars and sub-assemblies built under the terms of various cooperative deals with other automotive companies. GAZ has contract manufacturing arrangements with both Volkswagen and Daimler.

As far as Sorokin is concerned, these deals have proven a considerable boon for GAZ. The contract manufacturing of complete vehicles is, he says, “a profitable business with no risks”. For a start, he explains, those operations occupy what was previously vacant floorspace – about 200,000 sq.m in total – which did nothing except “generate overheads” for the truck business. Moreover, the other OEMs take full responsibility for the price and quality of relevant incoming parts and materials, as well as for ensuring the subsequent distribution and sale of completed vehicles.

However, contract activities are not completely isolated from their surroundings – the workers on the respective lines are all GAZ employees – and have had generated some feedback into GAZ itself. This is particularly the case, Sorokin indicates, with quality standards and procedures: “We have raised our quality threshold".

An objective view
Sorokin explains that GAZ started to carry out “customer satisfaction” audits in the spring of 2009, making use of a methodology that was “borrowed from Chrysler”. He explains that an essential feature of this approach is “looking at [your own] products with a customer’s eyes”. When GAZ used this technique to analyse its own products, there was no doubt that some improvement was needed. Sorokin candidly admits that the company racked up no fewer than 1,200 “demerit points”. 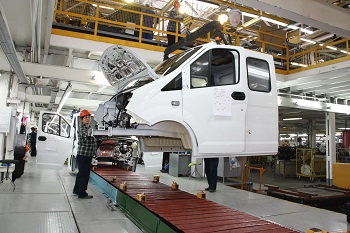 At Nizhny Novgorod, GAZ makes not only its own products but vehicles for VW and Mercedes-Benz
By the time production of the GAZelle Next got underway in the second half of 2013, that count was down to just 80 points. However, adds Sorokin, that occasion also coincided with the launch of Mercedes Sprinter vans made by GAZ, which meant the latter had to employ some elements of the relevant Mercedes methodology – and when it did so in the case of the GAZelle, the negative points count spiked up again. The quality system was, therefore, drastically remodelled in order to comply with stricter parameters. Quality is never absolute, and Sorokin observes that, “there is still a lot of room for improvement”.

Interestingly, he reveals that, when GAZ was gearing up for its ventures into contract manufacturing, it received some assistance on a consultancy basis from the company that is widely regarded as a leader in the field: Austria-based Magna. However, Sorokin argues that GAZ has created a quite different sort of contract manufacturing business from that of its mentor. Magna, as he points out, assembles “premium” level cars, whereas GAZ “makes money” from assembling notably less expensive vehicles. Nevertheless, when asked if contract manufacturing has raised GAZ’s own quality levels, Sorokin’s answer is an unequivocal “yes”.

Product development
Over the past couple of years, quantity as well as quality has been a hallmark of the company’s operations. In 2014, Sorokin reports, the company “introduced a new or substantially modernised product nearly every month.” In 2015, he adds, “we have continued in the same way".

One enabling factor that Sorokin identifies is the close relationship GAZ has developed with a particular supplier, South Korean die maker LG, in a partnership that started with work on the GAZelle Next. He explains that it is now established practice for the South Korean company to send an initial batch of around 200 kits of relevant parts, which enables work to get underway in Russia on prototype building as soon as possible. Meanwhile, the main batch of dies for a new vehicle will be transported more conventionally by sea. As Sorokin explains, “by the time they arrive we will have already laid out the process and trained the people, so we can just put the dies in the presses and start making parts.” The consequence is a reduction of “at least three months” in the overall pre-production period.

Sorokin adds that the arrangement has almost, but not entirely, supplanted GAZ’s own die-making capability, which was previously used to satisfy all requirements. The company still retains an in-house resource, he explains, for maintenance and repair, and also for making dies for small-parts production parts, but even then it has to bid against external suppliers and will not be awarded the job except on competitive merit. Sorokin says the approach is simply a reflection of what is now the underlying ethos of the company as a whole: “We are not focused on utilising  in-house assets. We are focused on seizing and maintaining market share".

Key internal processes
Sorokin is keen to emphasise that GAZ does have some internal processes that are specific to the company and play a key role in determining its success in the market. GAZ's focus on a modular approach for the design of vehicle elements enables the same units to be used in identical or only slightly modified form across different vehicle ranges. For example, a cabin module for an LCV will be reused for both medium and heavy trucks. Elsewhere, the same basic chassis can serve for both light-duty trucks and small buses. Sorokin is confident that the extent to which GAZ exploits this approach is one of the company’s most distinctive features. 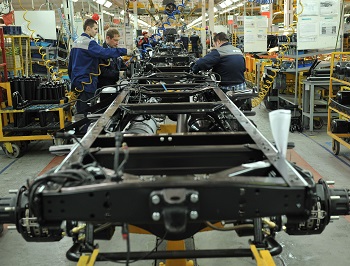 Continued product development will be the key to enabling the company to expand into further export markets. Sorokin says GAZ has already identified that an upgraded LCV with a gross vehicle weight of 4.6 tonnes – as opposed to the current limit of 3.5 tonnes – should create an opportunity to sell 10,000 such vehicles a year. Similar opportunities exist for the company’s medium and heavy truck ranges. In the latter case, Sorokin says the engineering of key elements of the current GAZon truck – he mentions the brake system, transmission and engine – has been carried out with the potential for an upgrade to a gross vehicle weight of 18 tonnes. That could, in turn, add another 6,000-7,000 vehicles per year to the order book.