The chief body construction engineer who masterminded the renovation of the F-150 bodyshop to make aluminium pick-ups explains how this was done in just one month – resulting in cleaner, quieter production 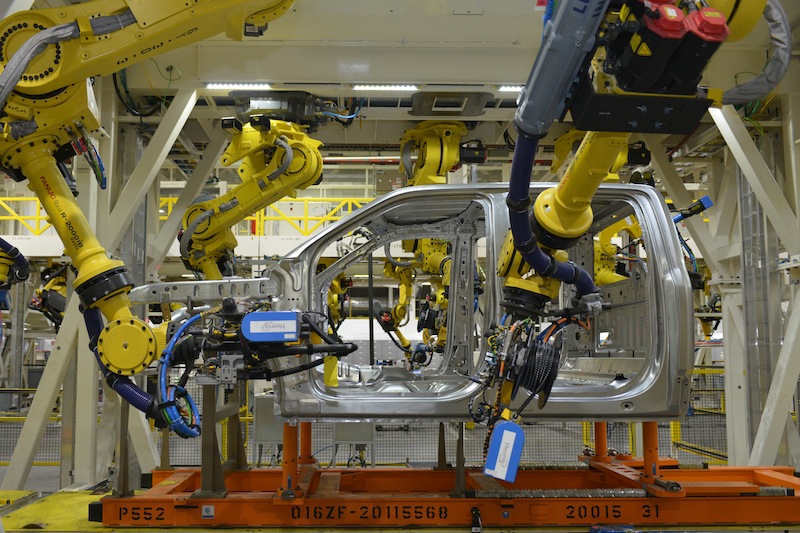 AMS: Compared with other projects you have previously worked on, how challenging was the bodyshop renovation for the F-150 and what were the key considerations?
Ron Ketelhut (RK): It was the most challenging that we’ve ever taken on. The aluminium technology at the rate that we’re building vehicles was a significant challenge. In addition to that it was the turnover time; obviously the F-150 is a very high-demand vehicle and to turn the plant over in four weeks like we did, that took a lot of planning and execution. We moved over a thousand trucks of tooling through the plant in actually a little over a week and in addition to that we had to haul out all the old tooling as we brought the new tooling in. So the planning and execution of the logistics was a key challenge.

Leading up to that: developing the interface between the robot and the flow-drill screw gun or the rivet gun or adhesive. We spent a lot of hours on the development of the controls and the validation of the controls. We started in 2009 with early planning and then kicked right in – and we needed all that time.

AMS: Did you use simulation software in the planning phase?
RK: We used Simul8. We simulated the bodyshop [and this] had a significant amount of input based on tooling uptime, how fast you can repair it, change rivet reels, all those factors. You put all that data into the simulation and run it for a while – we ran it for tens of thousands of cycles – to see where would the machine fail, where would we see a bottleneck? So we used Simul8 to verify that the bodyshop would run after we put it all together.

AMS: Would you say you hit the ground running?
RK: No, I wouldn’t say that. I’d say the transformation from the steel pick-up truck to the aluminium pick-up truck went really well. I think we exceeded anybody’s expectations when we converted, and we accelerated on plan; we have a standard acceleration for any launch and we achieved that with the aluminium vehicle. Was it easy? It was not easy at all.

Ford took a big risk in transforming its production of the F-150, the bestselling vehicle in the US for the past 33 years
AMS: How many vehicles are you making now?
RK: Over 1,200 a day per plant [the F-150 has also been made at Kansas City, Missouri, since March] and we’re on a three-crew pattern, so we run Monday through Friday, and then one shift on Saturday, one shift on Sunday – at both assembly plants. We are at maximum capacity.

AMS: In terms of planning and implementation, what lessons were learned here that were then applied at the similar renovation in Kansas City?
RK: The joining technology was really new – not new at a low volume but new at a volume like this. So a lot of the lessons we learned applied not just to the machine but to the people responding to the machines.

On the machine side there were a lot of lessons from the riveting equipment, that we identified whether it was a logic change or a hardware change, a slight tweak to what we already tested – because we had thousands of hours on all of the joining equipment previous to launch. In fact, we installed riveting equipment on the steel truck, just to get confidence not only with our ability to do the joining process, but giving the people on the floor an opportunity to see the equipment. So we added manufacturing equipment – not required by the product but assisting us in validating our technology and helping the skilled trades technicians get up to speed quicker. So that was a big help; we learned a lot.

"The transformation from the steel pick-up truck to the aluminium pick-up truck went really well… Was it easy? It was not easy at all" – Ron Ketelhut, Ford

We learned even more when we put in over 500 robots with joining equipment on the end. So whether it was a logic change or a slight hardware change to a rivet gun or there was programming of the flow-drill screw parameters to change the speed or the depth or the pressure, all those were carried over to Kansas City, which really helped us accelerate faster [there].

AMS: What was the impact of the aluminium? Was it mostly the robotics or, for example, the amount of space required?
RK: It’s actually a smaller footprint than for a steel bodyshop. The robot itself is the same robot, it’s primarily the joining technology which completely changes the game; we’ve been welding vehicles for over a hundred years. And that’s a big change for the workforce, too. For a long time they’ve done nothing but weld – and they did it really well – and now you’ve changed the technology and it doesn’t just squeeze and throw power through two pieces of metal, now you’ve put [in] something they can’t see and they had a hard time catching up to it.

So it’s the joining technology that really is the most significant and it’s the amount of the equipment. Because we are the highest-volume producer of aluminium pick-ups, we have a lot of equipment joining all this aluminium together. So that was the biggest change: the amount of aluminium joining equipment that we have in a single plant.

AMS: Can you talk a little bit about the training that the workers received?
RK: There was basic training to introduce them to the bodyshop, the layout and the flow, [plus] very in-depth [instruction in] that laser equipment and how the head works itself, so how the wire feeds through with the heat, the adjustment of the mirror; all the very in-depth technical knowledge of each part of the component. Four hundred hours per person [200 in class, 200 in a simulated environment]. In advance of the transformation, we built a training centre and we put all the same technology that you see out on the floor in the training centre and then the plant assigned people to come in and become ‘train the trainers’. Then we brought in specialists to train those folks [and] they became ‘train the trainers’ at our training centre. It’s worked out really well.

AMS: Did personnel from Kansas City come here to learn?
RK: For sure, when we were launching the facility, Kansas City brought up several of their hourly and salaried people to participate in the launch, to not only help us – because we definitely needed extra hands and eyes – but they learned a lot and it was a significant benefit. Even when I go back there [now] they’ll say, “Yeah, that didn’t happen here because we saw it at [Dearborn] and we already made that adjustment”. 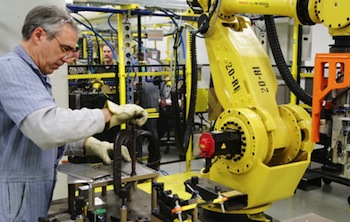 Training for the new methods of production amounted to 400 hours per person. Staff from Kansas City (above) also came to Dearborn
AMS: What is the level of automation, compared with what it was before?
RK: It’s pretty equal. It may be 10% more because we are robotically loading a lot more parts than we were before. In fact, the hood itself is robotically installed here, which we didn’t do on the previous truck. There are several other [examples]. But the other nice thing about this product – you saw the few operators that were out there – [is that] you get to pick up the part with your hand. Traditionally, they would have had a lift assist to pick that part up because it would have been pretty heavy, which creates more cycle, more waste because of the tooling.

AMS: And what is the environmental impact?
RK: The reduction in energy is really something we’re proud of. In addition to that, the recycling of the aluminium. If we scrap material here we bring it over [to the adjacent stamping plant] and we recycle when we would normally have not followed that same process. So the impact of being green and supporting the environment from the recycling side has been a very big success – and didn’t come at no cost, either.

The stamping plant is a two-level plant; you’ve got the presses up top and down below is all your scrap handling, and if you walk in the basement and you see the conveyor belts of the different scrap materials coming and then going into the shredder, it’s pretty neat to watch it. And when you’re sitting there in a design review and you are looking at the stamping guys trying to justify the scrap-handling tools you say, “Come on, really?” Then when you get out there, you say: “What a great idea!” We’re going to reuse all that aluminium back into the product.”

There’s no water usage in the bodyshop, where traditionally we had quite a bit of water because all the weld guns needed [it] to keep cool. We still use compressed air at the same rate, so there’s no real saving in green there, but from the environment side it’s quiet, it’s extremely clean. Weld guns had a lot of waste with the cap itself, where we had copper caps that were disposed of if you didn’t use the whole cap; you recycled them but you still had of a lot of waste there. There’s no smoke, so we don’t have exhaust like we did before. We had exhaust handling units on top of the roof – they are still there but just exhausting clean air out into the environment. 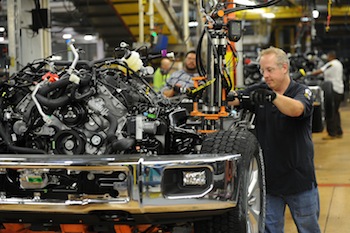 Ford believes its pioneering production of the new F-150, which is quieter and cleaner than before, could be a model for the future
AMS: Do you think the new F-150 bodyshop could be a model for other facilities in the future, whether operated by Ford or other OEMs?
RK: Absolutely! It’s our model. Not that we’re not going to make it better from where we’re at. It is absolutely a footprint for the future: over 60 jobs an hour, over 2,500 rivets per vehicle. You saw the workforce, there’s very few people out there. It’s extremely quiet, it’s clean, it’s small.

It’s definitely our model going forward. We even put an RF [radio frequency] tag in every truck we loaded [during the renovation] then tracked it down the road, so the guy waiting at the door knew that it was coming to the gate. We had to have it that way because we only had seven days to unload all those trucks. This is absolutely a model for the future, and I think you’ll see it in future too.