GKN Driveline has had a manufacturing presence in Mexico since the 1970s and has grown strongly in recent years. The company's operations director for the country discusses its new propshaft facility in Guanajuato 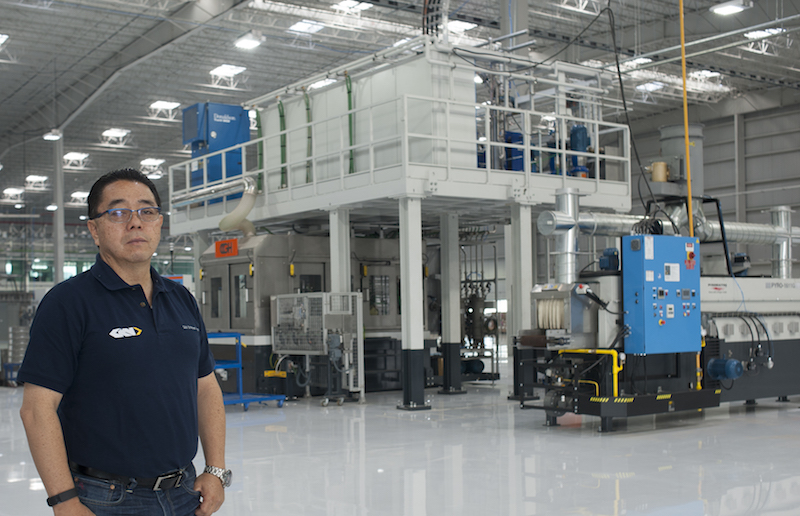 Joanne Perry (JP): GKN Driveline has many facilities around the world but relatively few in the Americas. Is this new factory in Mexico part of a trend?Fidel Otake (FO, above): This new facility [at Villagrán] is the result of the automotive industry’s growth in Mexico and the benefits that the main OEMs are finding to be located in the country. Today, we have four main facilities: forging, machining, assembly and the new site that is for propshafts and their components. Currently, we are producing around 7.5m [units per year] and the plan is to grow to above 10m sideshafts in the next four or five years. We have a plan to grow in Mexico and the group is trying to focus on the most convenient and productive areas.

JP: In particular, what drew GKN to Villagrán?FO: To decide where to allocate the new facility, we considered several factors such as the city’s infrastructure, the skill level of the people and the synergy that the facility could have with other GKN locations. As this facility will maintain a strong relationship with the forging and machining facilities in Celaya [also Guanajuato], Villagrán was identified as the best place to be installed. The other main factor was the strong reputation that GKN has in the region, a reputation that will increase the desire of the people to work for our company.

JP: How easy is it to find workers with suitable skills in this region? Have you implemented special training?FO: The automotive industry in the state of Guanajuato has grown at a fast rate and thus the demand for competent workers has also grown, so this is one of the challenges. The level of competence that we need at GKN is very important because we use very high technology – a lot of cells with robots and a PLC [programmable logic controller] interconnecting the line.

Finding workers with suitable skills can be a challenge in Guanajuato

Normally, we hire at the level of technical high school but we have to continue training recruits for some time – six months at least for the basics and then around two years’ training in each one of the operations. In the case of engineers, we also have a special programme that we call ‘New Talent’. We bring the best engineers in the region to that programme – a year in which we try to teach all the culture of GKN and the automotive industry. At the end of the year, we select the best people and once we have them here in the company, we have a plan with five steps. For example, we hire manufacturing engineers, mechanical engineers, industrial engineers, but we have to add some specific knowledge in steels, ‘lean’, security, leadership – many topics.

JP: How much influence comes from the parent company?FO: It’s mainly done in Mexico, but also we have support from GKN in the global programmes – some people come to teach specific topics, for example lean manufacturing. Mainly when GKN is developing a new product, [for example] in Germany or in Spain, and we have to implement it here in Mexico, we have a programme of know-how transfer. We send people to those places, then people from GKN come here in order to provide the know-how transfer to produce the parts with the new programme.

JP: How long did it take to construct this plant? Is it modelled on other sites, like the first Villagrán facility?FO: The construction of the facility took nine months to complete, from the land preparation to the last activity, and the flow of the facility follows GKN best practices around the world. It is not modelled on the Villagrán assembly facility, but captures the lessons learned and the best practices implemented there.

In general, we have some standards in the case of the cells, but growth depends on the situation of the country. In Mexico, we are growing at four sites. In 1979, we were a small company and at the same site we had all our production – machining and assembly. Then, over time we integrated forging; then we grew again and we decided to create a new company to move the assembly into that area.

“The automotive industry in Guanajuato has grown at a fast rate and thus the demand for competent workers has also grown, so this is one of the challenges” – Fidel Otake, GKN Driveline

Mexico continued growing and we decided then to move the IC [interconnecting] shafts to the assembly site. The last decision that we took was to create a new facility just beside the assembly [site] because today this original building is full. But the strategy is to have companies in the radius of 10km in order to have a lot of interaction, a lot of synergy. 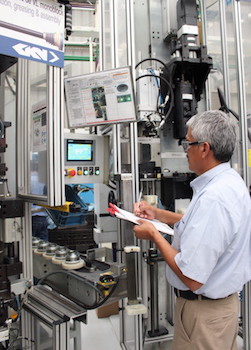 JP: The new facility is described as ‘state-of-the-art’. What equipment and production processes support this claim?FO: The facility and the machines incorporate the best available technologies in order to support GKN’s key goals. The building has isolation systems implemented to work without a controlled temperature in the shopfloor, and the lighting system is controlled by a PLC in order to maintain the same level of illumination over 24 hours, utilising the daylight as much as possible through special prismatic domes that capture the light without transferring the temperature.

The machines have the newest technologies for process parameter monitoring, quality controls and workers’ ID requirements. The assembly process has the capability to adjust automatically the load and unload positions, aligning these parameters to the worker ID.

Today, as well, we are trying to understand the new step in Industry 4.0 and to define how we are going to go in that direction. We want to create a process that could provide the right information to make wise decisions and always produce the right product.

JP: Have any sustainability measures been incorporated into the plant’s infrastructure and production processes? Do you use renewable energy?FO: From the beginning, we have included the monitoring of energy and water consumption. For each one of our assets, we can monitor the performance and translate it into process costs and through these indicators we can obtain an overview regarding the company’s sustainability. We also recycle 100% of the water. Today we are using regular energy, but we have a plan to start using green energy – to co-generate energy with another company that has to produce hot water. We believe that it is going to take three years.

JP: What makes the new VLi propshaft ‘faster to assemble’? Can you outline the process?FO: The propshaft process has a balance between out-of-the-flow and continuous-flow operations, therefore the level of activity inside the cell, as well as the automatic adjustment to the worker of the assembly stations, helps to maintain the rhythm of the process, increasing the output of the cell. The assembly process consists of: subassembly of components; TSA [tube-stub shaft-PVL/PXS assembly] welding; TSA assembly; twinning; balancing; greasing and labelling; and painting.

JP: How many facilities are producing the new propshaft?FO: In the Americas, it’s only Mexico. In Europe, it’s Poland and Germany. We are also trying to develop this product in China.

JP: Are there any logistical challenges to overcome in sourcing the raw materials for this operation?FO: We are getting the raw materials from several places – the tubes currently come from Europe, as do the IR [inner-race] forgings; tubes for cages are produced in Mexico and the forgings for outer components are produced at GKN Mexico. The challenges are related to the connection between all the suppliers and the machining process, therefore we use systems that can help us to optimise the materials logistics in order to avoid over-inventory or lack of parts.

JP: Will it be possible to source everything in Mexico?FO: Not everything, but we are in the process of developing our suppliers in Mexico. Today, we have a base of suppliers here – for steel, tubes – and in the last year many other suppliers moved to Mexico. In the end, we are trying to localise as much as possible.

JP: The plant launched production in May. What is the current output and how soon will you reach capacity?FO: Currently, the output is in line with the ramp-up of the new Audi and FCA programmes [the Audi Q5 and Jeep Renegade], therefore we started with a production of 2,000 propshafts per week in August and will be increasing the volume on a monthly basis. The facility will achieve the installed capacity for those programmes in April 2017 – 250,000 propshafts – and then we will start the development of other programmes already awarded, ie GM in August 2018. The total volume that this facility will be able to support is 550,000 propshafts with all the high-speed components required – 1.5m high-speed joints.

JP: Are you supplying only OEMs in Mexico or exporting too?FO: Today, roughly 50% of our production goes outside Mexico, mainly to the United States, some to Brazil and some to Europe – but Europe is a small portion. The other 50% is supplied to OEMs in Mexico. In the US, it’s mainly to GM, FCA, Ford and Volkswagen. Also, we send a lot of components to our sister company in the United States to support the growth that they are experiencing. 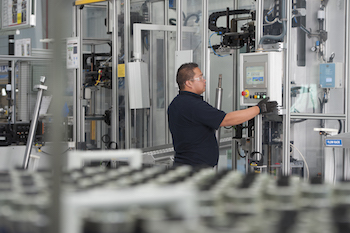 JP: Given the increasing demand from vehicle-makers in Mexico, is there any potential to expand this facility in future?FO: Yes, there is. The strategy we developed was based on a modular plan in line with the potential future growth of the automotive industry in Mexico. Currently, we are evaluating the implementation of the second phase for 2018, but it will depend on new business growth in the region in future years.

JP: What will the second phase involve?FO: We are going to supply BMW, which is opening a facility [in San Luis Potosí]. We plan also to sell to Mercedes [in Aguascalientes] and these two projects are going to trigger additional capacity. We are installing some machinery and products in our new facility but we also have to open capacity in the current machining site, by moving some processes to the new site. In the end, we will have additional space and reorganised production areas.