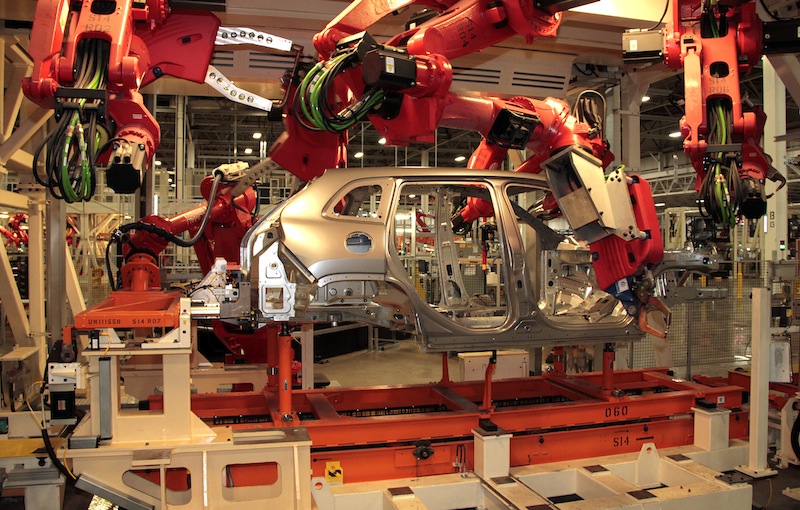 AMS: How important is Toledo within FCA’s North American production network?
Chuck Padden (CP): We’re the largest assembly plant within Fiat Chrysler [in North America], so from a volume standpoint our half a million vehicles are very important. We carry a lot of weight because we are the largest, so everything we do here is proportional; our quality numbers become very important to the overall operation of the company, our cost savings, the efficiencies we gain from World Class Manufacturing. That 511,000 [units made at Toledo] was half of all Jeeps manufactured last year worldwide.

AMS: So would you say it’s a benchmark?
CP: From a World Class Manufacturing standpoint, again we’re the number-one assembly plant in America and we’re one of the top assembly plants within Fiat Chrysler.

AMS: As a plant which focuses on Jeep production, does it have special features in terms of equipment, tooling, production processes, robotics?
CP: From a robotics standpoint, not so much. The bodyshop that you see here is very similar [to others in FCA]. In the flex deck operation [in assembly], there are subtle differences because the Jeep is bigger than some of the B- and C-segment vehicles being produced in Europe. We had to upsize some of the equipment to accommodate the four-wheel drive, the larger engine, the larger vehicle, the extra weight; but the manufacturing processes are similar.

AMS: And you’ve had a supplier park here since 2005 –
CP: For the Wrangler [made in the South Plant]. There are two suppliers; [Kuka] provides the bodyshell and OMMC, Ohio Module Manufacturing Company, provides the rolling chassis – they’re a division of Hyundai. The body comes to the paintshop, where we paint it and deliver it to assembly, and the rolling chassis drops down onto the Wrangler assembly line, where we marry the painted body to the chassis and finish the trim operations in final assembly.

AMS: So where do you get the components for the Jeep Cherokee?
CP: From all over, it depends on what it is. The diesel engines come from Fiat Powertrain in Italy; we receive components, from wheels to wiring harnesses, from Mexico; we also have 29 companies within north-western Ohio and south-eastern Michigan that provide components just-in-time, just-in-sequence, to the operation here. Components such as the instrument panel [and] the seats, will start building at the same time as we broadcast for assembly and they will marry to the bodyshell as they come into the workstation.

AMS: Do you have any plans to try to bring the suppliers closer to the plant?
CP: Many of them already have [relocated]. Some of them, like Kuka and OMMC, are on the plant property, on the 284 acres that we have here. Others are within miles [29 average 11 miles]. They relocated here in order for sequencing [to occur]. And initiatives to move other suppliers closer are something that our logistics group is looking at all the time.

AMS: Is the plant still expanding/ramping up following the $500m investment announced in 2011 or are you in a phase of consolidation?
CP: The work is complete and we’re at full production but we’re continuing to tune the process for greater efficiencies. We’re building one vehicle here [in the North Plant], one body style, which is the Cherokee. There are no current plans to bring a second body style in at this point.

AMS: Are you doing a summer shutdown?
CP: No, actually there is no summer shutdown on both sides of the house because the demand for both the vehicles is so strong. [Toledo went down from July 3-5 for the July 4 public holiday and was back up on July 6].

AMS: With regard to the WCM Bronze status attained in 2012, can you give examples of the systems and behaviours which contributed to this achievement?
CP: WCM is integrated in everything we do. It might be easier just to show you! WCM, as I describe it, is how we do things, it’s not what we do; it’s how we attack our losses. WCM is built upon the principle that you have unlimited losses. We stratify those losses, but we have limited resources, and so part of the WCM methodology is to make sure our limited resources are attacking the top losses to make sure that we’re achieving our savings year over year. 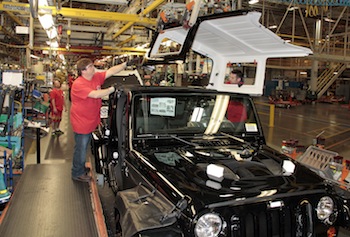 AMS: You have insourced a number of procedures since 2011 – painting, underbody subassembly, suspension systems – why?
CP: Yes, we have insourced the suspension production area, the painting operation for the Wrangler and the metering system where material is sorted and delivered to the line. We took that all in because we can do that competitively and can better control quality. We have become very efficient at these operations.

AMS: Finally, would you say that this plant is a good example of the benefits to be had from the merger with Fiat?
CP: Absolutely. The bodyshop butterfly system was brought over from EMEA. Then take the flex deck system within assembly, again that’s from Fiat, and then the WCM processes themselves, which were part of the contractual arrangement when Fiat and Chrysler merged. Part of that deal was that we had to adopt World Class Manufacturing with the UAW [United Auto Workers union], and so the work that you see with the engagement of the hourly folks is a direct result of the relationship with Fiat.