Mercedes has upgraded the van assembly lines at its Ludwigsfelde plant with a new, automated system 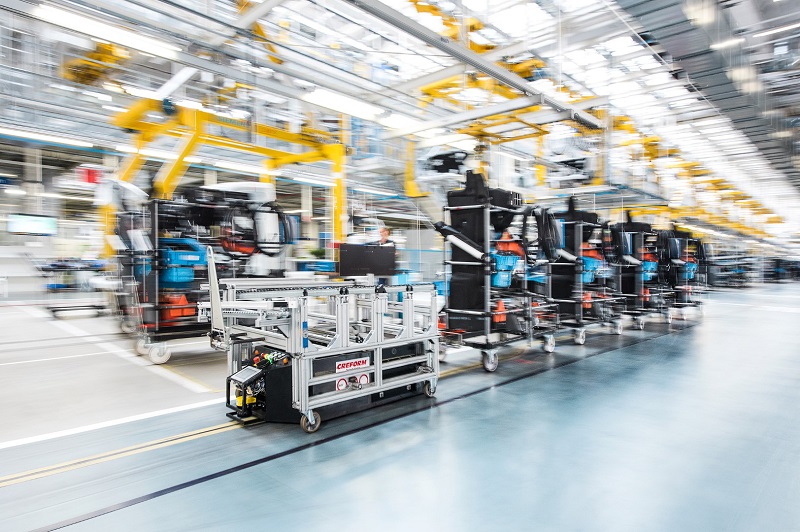 According to my guide around Mercedes-Benz Ludwigsfelde, Peer Braun, the working environment has been greatly improved; it is much quieter and open, the idea being to view the whole assembly process from one side of the hall to the other. But the upgrades to the assembly lines at Ludwigsfelde, Germany, are not just cosmetic. The plant is piloting a new approach to lineside operations using a much higher level of automation. At the first assembly station we visit, we observe the automated guided vehicles (AGVs) in operation and the process seems very simple and effective. The robotic vehicle delivers a fresh set of door kits (enough for three vehicles) to line workers, automatically replenishing the parts then removing the empty containers.

Using in-house expertiseBehind this seemingly simple operation lies a huge amount of planning, scheduling, designing and building. Firstly, the AGVs have been designed and built by an in-house team using outsourced technologies, such as sensors from Sick. Similarly, the trucks carrying the parts have been built in-house, with a large contribution to the design coming from the line workers. These, along with the lineside layout for parts storage, were subject to a consultation process, in which the engineering team responsible for the project collaborated closely with the line workers to optimise the operation and integration of the automated units, and the layouts of the parts trucks and assembly stations.

The AGVs circulate around the assembly hall according to a cycle time relating to the takt time of the assembly operations. This ensures precise delivery of the scheduled parts. The robotic vehicles use a variety of visual sensors to follow a marked track around the hall, pausing only to deliver parts and to recharge their batteries at a floor-mounted, fast-charge point. These robotic units are able to deliver a variety of components ranging from interior trims to heavier parts such as batteries. While the majority of the workstations are serviced by the AGVs, a small number still require a manually operated truck to deliver the parts and it presents an interesting contrast to see both methods in operation.

The kitting process highlights the ingenuity of the Ludwigsfelde project, combining both human and machine operations

implementing kittingMany of the parts are supplied to the lineside in kits (another part of the optimisation process) and these kits are put together manually due to the widely differing parts and materials, making it very challenging to automate. The delivery AGVs drop off the empty carts and pick up the next batch of kits. This process requires the AGVs to perform a fairly complex series of manoeuvres to detach the empty cart in the correct position to be refilled and recouple with the next load. Although fully functioning, the automated systems are still being fine-tuned and the space available in certain areas of the hall would appear to compromise the otherwise smooth flow of the operation.

The kitting process highlights the ingenuity of the project, combining both human and machine operations. An AGV guides the empty cart through various storage points. It is programmed with the scheduled parts which are required in the following cycle, with the human operative able to view the part number via a digital display. At the appropriate storage point, the AGV pauses and illuminates the correct part bin, using one of an impressive array of carefully positioned lights on top of the robotic vehicle, indicating which part should be selected for that kit.

"We invested a great deal of time in creating and optimising the car-sets [kitting], the development of which was driven by the assembly workers"– Sebastian Streuff, Mercedes-Benz

Appreciating manual dexterityThe presence of the human operative highlights the limitations of automating this part of the process; the variations in size, shape, texture and other characteristics of the parts would require a number of different robots to complete the picking operation. By contrast, a single human worker can complete the task whatever the variations. Once the part is picked, the operator activates a hand control indicating that the AGV can move to the next part location.

The whole process was performed with quiet efficiency during our visit; the current volumes and takt time have made Ludwigsfelde the perfect pilot plant for Mercedes to develop this technology. Interestingly, it seems that the human element ­– the line workers’ considerable input into the design and layout of the automated parts trucks and workstations – has made a significant contribution to the success of this automation project. 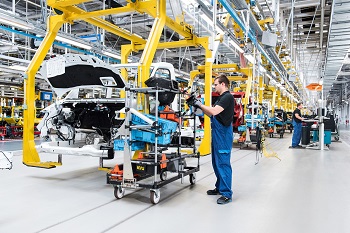 Mercedes will transfer the technologies developed at Ludwigsfelde to other plants, including those making cars

AMS: You said that Ludwigsfelde is the benchmark in intelligent vehicle production. So does this mean the same production line technologies and processes are being rolled out across other Mercedes factories, including those for cars?

Sebastian Streuff: Within the Mercedes-Benz Vans network, Ludwigsfelde has been a pilot plant for developing these new technologies and processes. We do have a clear plan for how we will transfer the experience gained and technologies developed here to other Mercedes-Benz plants.

So we have van production plants in Dusseldorf [Germany], Vitoria in Spain, and we have other plants in South America – Argentina – plus one at Charleston in the US. This transfer of information and technology will happen in stages.

Also, we have had a lot of visitors ­– a group every two weeks – from our truck and passenger-car units, who are looking to learn from what we have done here at Ludwigsfelde. This shows that we have become a benchmark plant for this type of production.

AMS: Which plants will see the roll-out of this technology first and what is the time scale?

Sebastian Streuff: It will start more or less in parallel with the larger plants, so mainly Europe, then transferring step-by-step to the other plants. It has taken us here two to three years to get to this operational point, so the time scale will be similar for the other plants.

AMS: Did production of the new-generation Sprinter require you to make these changes to the assembly lines at Ludwigsfelde or were they part of a wider plan?

Sebastian Streuff: The new Sprinter was one consideration but so were the plant and people here. Ludwigsfelde has had a mixed and emotional history and in recent years has experienced changes in the products produced. Within the Daimler group, this is considered a small plant and as such has had to compete strongly to get production of new models to ensure its survival. The people here wanted to prove that this plant was the best choice to produce the new Sprinter and it has proved to be the case, with the changes to final assembly resulting in efficiency gains of around 10%. We also have reduced the space requirement for lineside materials by about a third.

So the successful implementation of the intelligent vehicle production project here proved that Ludwigsfelde was the right choice of plant to produce the new Sprinter. Without this upgrade it would have been much more challenging to build this new model. Now production operations here are much more flexible and this enables us to take on production of new models if needed.

AMS: As well as improving the lineside logistics, have you up graded any of the tooling? If so, what?

Sebastian Streuff: The tooling wasn’t the focus of the upgrade as we already had a high standard of equipment. In terms of the assembly process, we invested a great deal of time in creating and optimising the car sets [kitting], the development of which was driven by the assembly workers. We have added new equipment in this area to help with the kitting. There has also been a lot of work on the ergonomics of the assembly stations, to help the workers be more efficient and reduce waste. The workers were very closely involved in the development of this and helped create what we call the ‘surgeon principle’, having everything in order and in easy reach.

AMS: Has the greater sophistication of the new assembly lines required an improved control/monitoring system to be implemented? 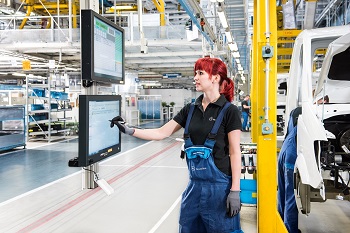 Sebastian Streuff: The basic production processes have remained the same, but we have introduced IT support for the sequencing and kitting operations. We are now considering the next steps with the project and how we might handle a larger number of autonomous vehicles inside the plant. So we are exploring if the need is for a ‘traffic’ control system or if the vehicles should communicate with each other.

AMS: How did you integrate the new technologies and processes without disrupting production?

Sebastian Streuff: This was an ongoing process that didn’t require us to stop the line. We created a special team of experienced line workers and engineers who worked on integrating the new systems (car sets, ergonomics, etc) on a station-by-station approach. These were tested, and where needed improved, in parallel with the ongoing production operations. This approach allowed us to integrate the new solutions very quickly into the assembly process.

AMS: Did the assembly workers require training on the new processes?

Sebastian Streuff: Not at all. The workers were very closely involved in the project from the very beginning, helping the design and development of car sets, workstations and parts presentation. So they fully understood their operational processes.