Hyundai-Kia: Moving on up

Expanding production has seen the Korean group break into the top five OEMs worldwide; with new plants on the way in China and Mexico, the vehicle-maker may soon challenge rivals for a place in the top three 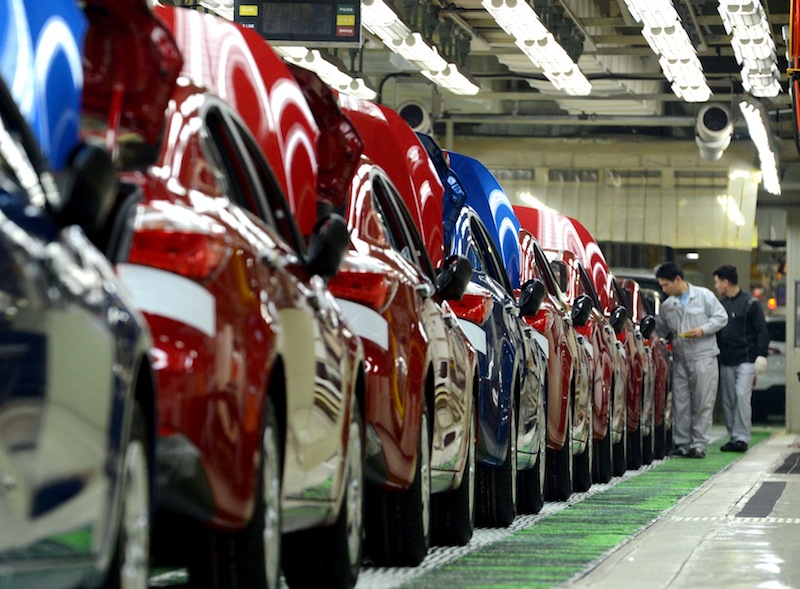 Not so long ago, even seasoned observers of the automotive industry would have stopped in their tracks at the idea of Hyundai-Kia being one of the top five automotive groups in the world. But today it is, and with combined annual sales soon to exceed 8m, the OEM is up there close to GM and Renault-Nissan, though still a little way behind Toyota and the Volkswagen Group. In terms of sales and production numbers, Hyundai-Kia is ahead of Ford and the newly merged Fiat Chrysler, and it is likely to remain so.

In Europe alone, the group can produce more than 1m units per year, with plants in the Czech Republic, Slovakia, Turkey and Russia. With significant expansion now planned for China, Hyundai-Kia is no longer purely a Korean player; it is a global OEM with headquarters that happen to be in Seoul.

This year had barely begun when news started to emerge of the next expansion phase at Hyundai-Kia. The group has set itself the target of selling 8.2m vehicles in 2015, comprising 5.05m at Hyundai and 3.15m at Kia. The bulk of these sales – and increasing production volumes – will come from outside Korea. Hyundai expects to sell just under 700,000 units in its domestic market, against more than 4.35m abroad; for Kia, the numbers are 480,000 and almost 2.7m respectively. Yet the company will not stop there. In his New Year address, company chairman Chung Mong-Koo set an annual target of 9m units, despite the economic and political instability in many world regions.

The recent success of the two brands is quite remarkable considering the situation in the late 1990s, when Kia was saved from bankruptcy by Hyundai, which bought a 34% stake. While the two companies still report separate financial results, their product and engineering strategies are becoming progressively closer. Their production networks are distinct, but Hyundai and Kia share platforms, powertrain technologies, purchasing, logistics and back office functions. Moreover, in Russia and potentially some other locations, certain Hyundais and Kias already do or soon will come off the same line. The cross-supply and sharing of powertrains in Europe is a very good example: Kia’s Slovakian plant supplies engines to Hyundai in the nearby Czech Republic, and in return, the Hyundai plant delivers transmissions to Kia Slovakia.

With the two brands having shared engineering underpinnings, joint product development has become increasingly common in recent years. In general, Hyundai tends to launch the first model off a new platform, but Kia has been pushing to become more prominent in this regard. Kia recruited Peter Schreyer from VW to head its global design strategy in 2006; he was clearly successful, as Hyundai made Schreyer joint head of design for both brands in 2013. In the core B, C and D segments, Hyundai and Kia share platforms, with common engines, transmissions and other hidden components; the brands are differentiated through exterior styling.

Home at the heart of production

Despite recent international expansion, the two brands remain dependent on Korean manufacturing facilities. Production on home territory represents just under half of total output across the group – the highest degree of dependence on domestic production of all the major global players. PSA, for all its problems, only produces around one-third of its global output in France, while at VW, Germany represents slightly over one-quarter of worldwide output. Clearly, Hyundai-Kia has a long way to go in this regard, but it has made significant progress since 2005, when 75% of its output was produced in Korea.

The pressure to reduce dependency on Korean production has been intensified of late with the strengthening of the Korean won, especially against the Japanese yen. Japan's OEMs made the decision to localise most of their production for overseas markets; Hyundai-Kia has belatedly begun to do the same.

Outside Korea, Hyundai has plants in:

In Europe, Kia's site in Slovakia is close to the Hyundai Czech plant and produces the cee’d, Sportage and Venga; like Hyundai Nosovice, Žilina has an annual capacity of 300,000 units. In the US, Kia has a 300,000-unit plant in Georgia which makes the Sorento and Optima. Last year, plans were confirmed for a new plant in Mexico to meet growing regional demand for Kia products. Like most other new Hyundai group plants, the Mexican factory will have an annual capacity of 300,000 units. Kia also has two joint venture plants in China, known as Dongfeng Yueda Kia; the first factory launched with a capacity of just 130,000 units a year, while the second plant, in Yancheng in Jiangsu, opened in 2007 with a more typical 300,000-unit annual capacity.

In addition to the Hyundai and Kia factories, there has been significant Eastern European investment from Korean suppliers; around 20 have established facilities in the region to supply both carmakers, including Dymos for seats and Hyundai Mobis, maker of dashboards, brakes and many other components. Other Korean companies in Europe include: Plakor, supplying bumpers and boot trim; Korean FuelTech Corp (KFTC) for engine parts and various trim components; and Sejong, which makes exhaust tubes. 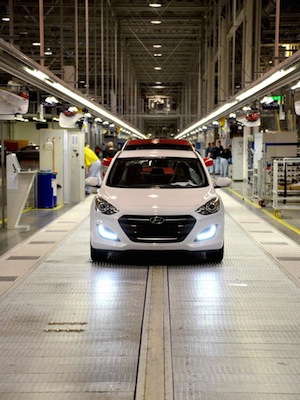 Expansion in China & Europe
As for many OEMs, China will be at the centre of Hyundai-Kia’s next growth phase; plans include the addition of two new plants and expansion at existing factories. However, it is not just in China where the company has excellent prospects.

While some vehicle-makers – notably Fiat, PSA, Ford and GM – have either closed European plants or switched to running them on short time in recent years, most of Hyundai-Kia’s plants are operating close to capacity. In fact, the two brands are short of production capacity in some cases – so much so that, with the new plants not coming on stream until 2016 or later, the group is likely to see its slowest growth for more than a decade.

The two new plants for China were announced in September 2014. Interestingly, Hyundai specified that the new facility in Chongqing would be used to help the brand develop its presence in the west of the country. The idea of a factory being used to target a particular region within China highlights the scale of the opportunity in the country for global automotive players. The other new plant will be in Hebei, in the north-east. Each of the new factories will add 300,000 units a year. Meanwhile, Kia is expanding its joint venture facility in Yancheng from 300,000 to 450,000 units.

In Europe, the company is diversifying its key models. The successful Czech-made i30 will have a high-performance turbo version launched during 2015, while a sporty coupé of the Turkish-built i20 is also due to appear in showrooms this year. Regarded for a long time largely as a ‘value-for-money’ brand, Hyundai is adding sporty, performance versions of its core models to draw in new customers – and to challenge traditional European brands.

For example, the i30 Turbo will have a 186hp 1.6-litre engine, and be capable of more than 125mph. With new versions of the Turkish-made i10 and the i40 – still made in Korea, but with European production a possibility if volumes rise above 50,000 units a year – the Hyundai brand is in the midst of a major product renewal programme which will see more than 20 models or variants launched between 2012 and 2017. It is not just cars which Hyundai is selling in Europe; the large H350 van was launched at the recent Paris Motor Show and production in Turkey is now under way; smaller vans, possibly H250 and even H150, may well follow. Again, European production is likely.

In North America too, the company needs more capacity. With Kia pushing ahead with a new plant in Monterey, Mexico, with an investment of $1 billion, Hyundai USA is negotiating for the use of some of this capacity to meet growing demand for its products in the region. In particular, Hyundai wants to make more of the Santa Fe and Tucson SUV for the US market.

Trouble in the US & Korea
However, it has not all been good news for the group. In 2015, the two brands are having to deal with the consequences of being fined by the US authorities for misstating fuel-efficiency figures; this sort of revelation does not go down well in North America, and Hyundai-Kia has been given a hard time in the press. Early in November 2014, the two brands paid around $350m, comprising a cash penalty of $100m, a contribution of $50m to the funding of an independent fuel-economy certification agency and the forfeiture of around $200m on previously banked greenhouse gas emission credits.

Having paid these penalties, Hyundai and Kia started going on the offensive, claiming later the same month that they would raise their average fuel economy by 25% by 2020, in response to new and tougher emissions rules in South Korea, the US and Europe. The company has said that this fuel-efficiency improvement will be achieved through introducing a new set of engines and transmissions, as well as reducing vehicle weight by the use of lightweight high-strength steels supplied by affiliate company Hyundai Steel. Adding hybrids to the product line-up will also help, with a plug-in hybrid Sonata expected to be the first new model of this type, set to launch in 2015. All future gasoline engines will be turbocharged as standard. 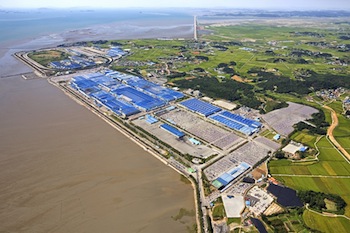 The company also faced a strongly negative reaction from investors when it announced plans to spend around $10 billion on land in Gangnam, Seoul, where it will build its new global headquarters. Having paid around three times the reported value of the land, outbidding Samsung, shares in Hyundai took a real pounding, with over $8 billion wiped off the company’s value in a few days.

Strikes were called at Korean facilities and the company received a very negative press; critics pointed out that the money spent on buying land in the most expensive part of Seoul could have been used to build more than half a dozen factories (the new Kia factory in Mexico is costing around $1 billion, while the Hyundai plant in Alabama is accounting for $1.7 billion). Recognising the need for damage control, the group bought back over $610m of shares.

Controversial though the land purchase was, and disruptive though the fuel-economy fines were, the future for Hyundai-Kia looks very positive. The group has risen almost unnoticed into the top five global vehicle manufacturers; it may yet break into the top three.