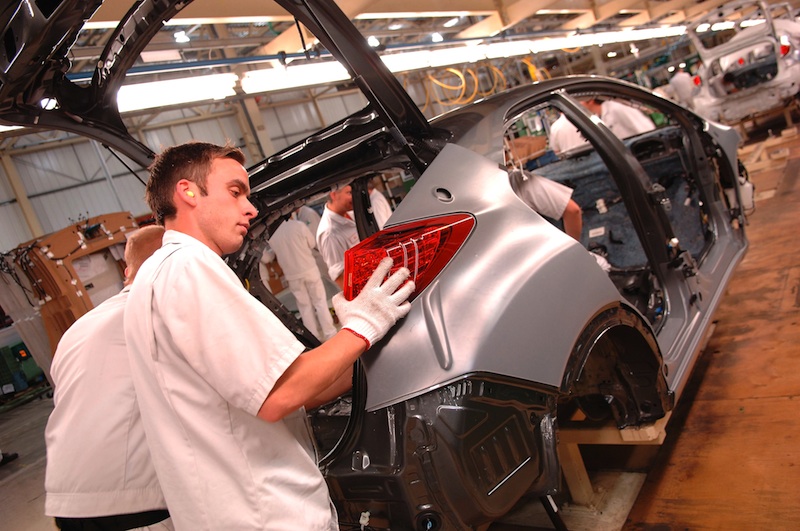 On a recent visit to the plant it became clear just how hard it has been hit by the prolonged European downturn starting in 2009. The year before, Swindon was building cars at a rate close to its capacity of 250,000 a year; 2009 saw that plummet to just over 75,000. Even as the European market has started to recover, the numbers at Swindon have not, with a total last year of just 119,995 of the Jazz B-segment hatch, the D-segment CR-V crossover and the C-segment Civic hatchback and estate. It got so bad that last year Honda mothballed one of two production lines, housed in a separate building complete with its own paintshop and bodyshop.

It is not immediately easy to see how removing the Jazz this summer and the CR-V toward the end of 2016 will improve the plant, especially since the Civic accounted for just 25% of output last year compared with 44% for the CR-V. However, Honda says the overall production numbers will not change and predicts 120,000 units per year when the new five-door Civic is shipped outside Europe to the US, as well as smaller markets like Japan and Australia. Currently just 10% of Swindon production leaves Europe, with the UK taking a massive 40% and the rest heading elsewhere in the region.

Global sourcing of shared parts
The new model is significant because structurally it will be virtually identical to the four-door saloon and two-door coupe planned for production in the US and other plants around the world. Global sourcing of shared parts will help Swindon enormously, according to Jim Harris, head of purchasing for Honda Motor Europe: “There will be a significant difference in cost to build the new Civic”. Currently, the Civic is a unique car designed for Europe, as is the CR-V. “The CR-V we're building at the minute has a different crash structure than the US car. Our car is more expensive because we've got more high-tensile parts,” explains Harris. The new CR-V will also be a global car, with production for Europe shifting to Honda’s plant in Ontario, Canada. This summer's Jazz will be built in Japan.

“There will be a significant difference in cost to build the new Civic”
– Jim Harris, Honda Europe

Further cost reduction will arise from a new method to bring the body together, meaning that the press shop and bodyshop will see a big chunk of the new investment, according to Honda. Without going into detail, Harris comments: “The system Honda will be using gets the most efficient balance between the number of welds and the strength of the car.”

Japanese immigration
Honda Swindon was established in 1985 just after fellow Japanese maker Nissan was persuaded by Prime Minister Margaret Thatcher into setting up in Sunderland, north-east England. Toyota arrived around the same time, building a plant in Derbyshire in central England. Like Nissan and Toyota, Honda also makes engines in the country and its on-site engine plant began production in 1989, three years before the factory actually built its first car. In the following decade, Honda turned out half a million cars and in 2001 the now-mothballed Car Plant 2 was built to increase capacity and satisfy demand for cars like the Accord D-segment saloon

The engine plant builds 1.2-litre, 1.4-litre and 1.8-litre petrol engines, as well as a 1.6-litre diesel. The petrol engine line-up will shrink when the Jazz leaves this summer, killing demand for the 1.2-litre, but the 1.6-litre diesel has started to be shipped to Mexico, where the company is making its new HR-V B-segment SUV. That car, with its frugal diesel engine, will be shipped straight back over to Europe, which seems inefficient but the double Atlantic crossing is something that also happens to diesels made by BMW and Mercedes for their SUV-specialist US plants.

The cylinder blocks are made in high-pressure die-cast machines built in the 1980s by Japan’s UBE Machinery. This is the only part of the factory running on three shifts because it takes so much energy to warm it that paying for the extra staff to keeping it constantly running is cheaper. The rest of the plant operates on two shifts, giving a capacity of 144,000 units per year with Car Plant 2 mothballed.

The aluminium cylinder heads are made in low-pressure die-cast machines and their complicated pathways are cooked with sand moulds that emerge as a blackened pile which is recycled by the local council for road construction. To form the delicate engine valve seats, Honda engineers in Swindon developed a special guide-press head for an off-the-shelf Fanuc robot arm which can do the work of 12 employees and has since been patented for sale to other makers.

The engine plant includes four test cells where engines are routinely inspected to ensure that they meet power and torque specifications. For new engines or new installations of existing engines, these are run 24 hours for seven weeks at a wide-open throttle – at a cost of £20,000-25,000 in fuel. Honda expects the performance at the end to be within 5% of the start figures.

Moving to lighter-weight, high-tensile steel
The press shop has the capacity to make 14.75m shots a year, amounting to 18m car parts – although that figure is likely to be lower at the moment. The fairly conventional process makes panels using four pressings, with the final piercing holes for other fittings. This is one area due for an upgrade in the next two years as Honda moves to lighter-weight, high-tensile steel for the new Civic.

The bodyshop, which currently uses 127 robots, will also be upgraded as Honda brings in a new method of welding that may reduce the number of welds (although the OEM has not yet disclosed the actual joining method). Currently, the floorpan and side panels are combined by 900-1,000 light welds and moved onto a spot-welding robot line where a similar number of deeper welds are applied that add strength to the chassis, so this might be where Honda finds a reduction.

The doors and tailgate are welded on a separate line, fitted ahead of the paintshop, then removed again before the assembly line. Honda says it takes into account the extra weight of the doors when fitting them ahead of painting to allow for a 1mm drop post-assembly, thus bringing them into line with the body. 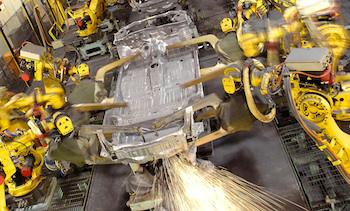 The bodyshop, which currently uses 127 robots, will be upgraded as Honda brings in a new method of welding
The cars are moved onto the assembly line by a single-slat conveyor for the interior to be fitted. All three models – the Civic, CR-V and Jazz – are run down the same line but appear in model-specific colour batches designed to improve the quality of the painting. Takt time in the factory is 82 seconds, although this has gone as low as 60 seconds in times of higher demand. This was achieved by reducing the number of actions performed at each station, by increasing the number of staff. Personnel are trained in a 'four-in-one' process, meaning that each member is trained to do four jobs and four members can do each job. This is to reduce any slowing of the line in the event of illness.

Moving around the other U-shaped assembly line, the single-slat conveyor changes to an overhead conveyor that spins the cars sideways to save space while the engines are inserted. They stay in this formation until they reach the other side of the line for the exterior and final assembly, for which they are spun around again and move forward via a double-slat conveyor. The seats also inserted here after they are presented to the line via an overhead conveyor that leads directly to a truck bay outside, where the line is fed by the seat supplier. The cars are then filled with around seven litres of fuel, enough to take them around the on-site test track for the final inspection (the test track is the old Vickers factory runway). Final checks include rolling-road calibration, ahead of the cars being trucked away. Although Honda does have a railhead at the plant, it is no longer in use.

Forward thinking
Honda currently has 3,200 personnel at the plant, after losing around 300 last year as a result of mothballing Car Plant 2. The employee structure conforms to the OEM’s global hierarchy, which theoretically puts workers at the top and the managing director at the bottom on the basis that the plant could not run without workers but can continue if their leader misses a few days. This philosophy sees all staff wearing the same white overalls and there a few obvious perks for the senior office staff, for example no dedicated parking spaces.

Honda is also quite forward thinking when it comes to the environmental impact of the plant. The OEM estimates that around 50% used by the plant comes from its own solar panels, while forklift trucks are also being converted to run on emissions-free hydrogen; the factory has one of only a handful of hydrogen filling stations in the UK. Honda’s next development for Swindon is one that could bring it onto a much firmer footing. By making a car that sells into its largest global market, the US, albeit in a body style that still lags behind the preferred saloon, Honda’s weak sales in mainland Europe will not affect Swindon as much as they have done in the past five years.

Playing it smart amid falling demand 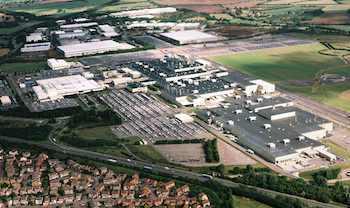 Honda Swindon has realised many cost savings and efficiencies
Over capacity is less of a problem in Europe now that carmakers such as Ford, Opel/Vauxhall and PSA Peugeot Citroën have shut down plants. Given that Honda Swindon is running at half its capacity, well below the point that analysts consider a plant to be profitable, the Japanese OEM could well have gone down the same route. But that would remove its manufacturing capacity in Europe, so Honda took a different option and mothballed half its plant.

The manufacturer has two car plants on-site, the second one built in 2001 after the first was struggling to cope with demand. After this demand tailed off, last year that plant with its assembly line, bodyshop and paintshop was ‘hibernated’ and the Civic brought into Car Plant 1. “It realised a lot of cost savings and efficiencies,” says a spokesperson.

One of those efficiencies has been to install suppliers into the unused space to shorten logistics. A case in point is Japanese brake pipe supplier Sanoh, which makes pipes in the nearby city of Bristol. Now it bends the pipes within Car Plant 2, meaning that they are much closer to the production line in their bent state, when they become more difficult to transport. “Bent pipes take up a lot of space,” explains Jim Harris, head of purchasing. “It's a very low investment to reduce logistics cost.”

Harris adds that most of the heat is switched off inside the plant, and there are also tax benefits to idling it, so all-in-all the hibernation has worked out well for Honda while it tries to make the plant’s new global role work. The goal is to have Swindon fully up and running again, but demand for the new Civic must first reach more than the 144,000 capacity of Plant 1 (more, on three shifts). “It’s our dream scenario,” says the spokesperson.