Once the battles over tariffs settle down, North America”s own brands can focus on the rapid and significant changes the domestic market is demanding. Ian Henry reports 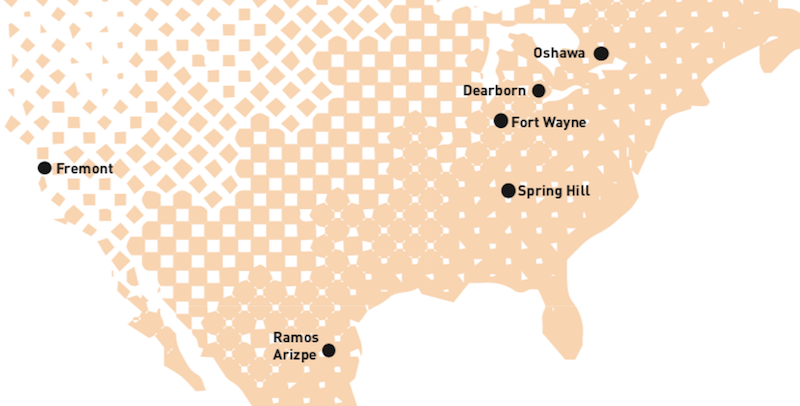 With the uncertainty mounting regarding the future of NAFTA and the distinct possibility that President Trump will raise tariffs on EU car imports from 2.5% to 20% or more, the North American manufacturing plans of the original Big Three US companies, and the latest entrant Tesla, have come into ever sharper focus in recent months. Although investment in new factories and upgrades to existing operations continue at several companies, while model line-up reduction and rationalisation takes place at Ford in particular, it is quite likely that the current situation in North America could change rapidly and significantly once the current battles over tariffs have settled down. A full scale trade war, especially if it is perceived as a change in the long term arrangements between trading nations and blocs could well mean significant change to the manufacturing geographies of the world’s car companies: watch this space, as there will almost certainly be many more changes in the near future.

Cadillac packGM is treading a fine line with its manufacturing strategy, investing both in the US and Mexico. In June it announced a $175m investment at the Lansing Grand River plant where it will make the new Cadillac CT4 and CT5, replacing the ATS, CTS and XTS models. Production of these new vehicles will begin in 2019. The investment for these models follows a US$211m investment for new tooling improvements to the body shop. Elsewhere, rising demand for pick-ups and crossovers has led to additional shifts being added, notably at Oshawa, Ontario where a second shift has been added to finish Sierra and Silverado pick-ups, using bodies which are shopped form Fort Wayne Indiana for painting and component fitting. Increased production of the pick-ups will compensate for the reduction in car production at Oshawa, where the XTS and Impala models moved to one shift per day in early 2018. In addition, a third shift has been added at Spring Hill, in Tennessee to cope with strong demand for the Acadia crossover, including that from Australia where the model is sold under the Holden badge.

Further investment by GM will take place in its plant at Orion Township, Michigan. Here the company will spend more US$100m in two facilities to make production versions of the Cruise self-driving car from 2019. Some of the investment will be allocated to the Brownstown Battery plant located just south of Detroit; this will make the roof modules, as well as the battery packs.

Despite the above, GM may not be President Trump’s favourite car company; its plans to revive the Chevrolet Blazer name, this time with a sleek looking model, will see production switch to Mexico (the previous boxy vehicle was made in the US). Production will be at Ramos Arizpe in Mexico, the decision having been made because of a lack of capacity in its US plants. Also made in Mexico is the Chevrolet Cruze, a somewhat controversial situation following the reduction in Cruze production at the Lordstown, Ohio plant with the end of the second shift there in June.

Outside vehicle assembly, GM is also investment further in diesel engine production, for the Silverado and Sierra pickups. A new 3.0 litre in-line turbo diesel engine will be produced in Flint, Michigan (having been designed at GM’s diesel technical centre in Turin, Italy). Back in 2015, GM had commuted US$263m investment without saying what it would make there.

Model behaviourFCA released another five-year plan with major changes to model line-ups and production arrangements for all the brands in the group. In terms of the impact on its US operations, there will be a new three-row Jeep Grand Cherokee, a new midsize Ram pickup and a number of models imported from Europe, including a baby Jeep, smaller than the Italian-made Renegade. Regarding the new Ram and Jeep models, no details have been released on where they will be made, but it seems reasonable to assume, for now, that these models will be made in the North American plants making their current iterations.

There will be limited, if any significant investment in the old Fiat, Dodge or Chrysler ranges. The new strategy announcement included very few precise dates, although the company says it will full implement all of its plans by the end of 2022. There will also be 10 electric vehicles and a number of plug-in hybrids, made possible by a total investment in this area of US$10.5bn – most of the line-up will have an electric or electrified option but where the new powertrains will be made or sourced from remains to be seen.

The man who saved Fiat and Chrysler

Crossover the divideFord’s main news this year has centred on the decision to reduce the number of conventional car lines in its north American portfolio. Although the Mondeo will reportedly remain on sale in Europe and China, in the US Ford is cutting the Fusion, which forms the basis of the Mondeo. In fact, the only cars which Ford will keep, beyond their current lifecycles are the Mustang sports car and the Focus Active which will be launched in 2019. This decision, made in the light of the market moving to SUVs and crossovers, was necessary, according to Ford CEO Jim Hackett, to “feed the healthy parts of the business” and remove those parts of its operations which “destroy value”. As well as the Fusion, other car lines which will disappear are the Fiesta (currently made in Mexico) including the MKZ, may also go by the wayside as they share components and modules with the outgoing Ford cars.

These changes will also lead got a reduction in capital spending between 2019 and 2022 by US$5bn to US$29bn; this will also lead to a much wider use of common modules and systems across the remaining Ford line-up, with common parts rising to 70% of the value of all Ford vacuoles by the end of the process.

At the centre of this change will the adoption of the Ford version of the MQB platform at Volkswagen. This will be used first on the new Ford Focus, which will see its production launch in China later this year. This is a unibody, front wheel drive structure and will be used for vehicles from the Fiesta through the Focus and up to the Edge and Escape crossovers.

In addition, although it is not clear how this will impact its US operations, Ford and Volkswagen have announced they are exploring ways of working together in commercial vehicles, especially vans.

By a canvasFew companies have made more noise about trying to break into the automotive manufacturing sector in recent times than Tesla. However, while it has undoubtedly acted quite successfully as a disruptor to the established strategies of most car companies, encouraging them to bring forward their EV plans, it has not really established itself as a major manufacturing operation. It recently achieved a long-term goal, to make 5,000 Model 3s a week, but having done so, in early July that it was temporarily halting production to make various improvements to its operations which had had to include a makeshift production line established in a tent at its California site to meet the 5,000 vehicles a week target. Production is due to increase further, to 6,000 vehicles a week, during August, but for how long this will be maintained is perhaps open to doubt. Tesla has confirmed it will make the Model Y crossover in November 2019, but where this will take place – other than not at the existing Fremont site – is unknown.