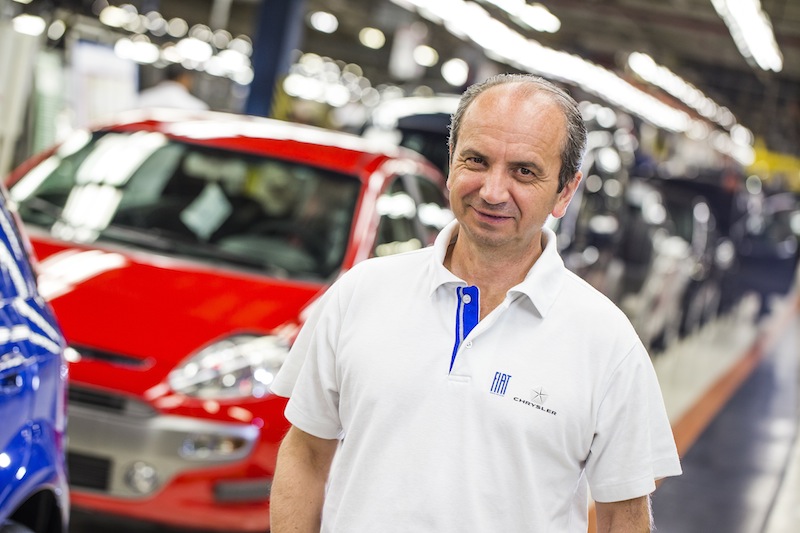 Joanne Perry (JP): How important is South America to Fiat as a production location?
Alfredo Leggero (AL): South America is very important for Fiat; we have been established in Brazil since 1976 and market leader for 12 years. Last year, Fiat Chrysler sold about 900,000 vehicles in Latin America (excluding Mexico) and forecasts sales to reach 1.3m units in 2018.

In 2013, Latin America was a 5.9m market and Brazil is the fourth-largest automotive market in the world, with 3.6m units sold last year. Currently, Brazil is ahead of important markets such as Germany, India and Russia. Now, we are having a time of adjustment on sales levels, but we project that the market will regain growth from next year, with a compound annual growth (CAGR) of 3.2% in the following years, according to IHS and our own forecasts.

Brazil has a strong domestic market, with 200m inhabitants and currently the lowest unemployment rate in its history – only 5.5%. The consumer market, the middle class and the working-age population are all growing. Furthermore, the country still has a low index of inhabitants per vehicle, with a big growth potential for car sales. While the US has one car for every 1.2 inhabitants, and Europe one for every two people, in Brazil there is one vehicle for every 4.4 inhabitants.

JP: What impact will the formation of Fiat Chrysler Automobiles (FCA) have on Fiat production plants in South America, and Betim in particular?
AL: Aligned to FCA’s strategy, we will have the sharing of architecture, powertrains and technology, and purchasing synergies, besides an extensive and modern industrial infrastructure. Our operations in LATAM are growing. In 2015, we will inaugurate our new automotive hub in Goiana, Brazil. The new plant will be the most modern and technological plant in the whole group.

JP: Betim is Fiat’s largest plant in South America; is it used as a manufacturing benchmark for the region?
AL: Fiat’s factory in Betim is the largest vehicle production unit of Fiat Chrysler Group globally and it’s unique in the world; a great example of how to manage complexity and flexibility in an automotive plant. The factory produces more than 3,000 vehicles per day and since its opening it has manufactured more than 13m cars and light commercial vehicles [LCVs], contributing fundamentally to the success of Fiat in Latin America.

Besides this, Betim is a benchmark for environmental and social sustainability for Fiat Chrysler and other companies around the world: the first manufacturing facility of LCV and passenger cars to be granted ISO 14001 status, in 1997, and the enabler for Fiat to become the first automaker to gain ISO 50001, in 2013.

JP: Is it correct that you are increasing capacity at Betim to 950,000 upa?  If so, will this involve the construction of new buildings and the installation of new equipment?
AL: To meet the increased demand of the Brazilian market, the plant has completed several restructurings, especially in the last decade, with the expansion of construction, installation of new machinery, adjustments in production and logistics processes and the introduction of new technologies that have enabled the production capacity to reach the current level of 740,000 vehicles per year – and 811,000 units in 2012.

"In an environment such as Betim, people are the major force of the entire production system" – Alfredo Leggero, Fiat Chrysler Latin AmericaPainting is the bottleneck in production and we are building a new paintshop which will feature modern paint processes for surface treatment and will have high efficiency, reaching 180 jobs per hour (JPH) – one of the largest in the world. This means a capacity of 950,000 vehicles per year.

The restructuring of the Fiat plant in Betim is an ongoing work. The production capacity and flexibility have been adapted to the Brazilian market growth and this is the secret to the success of this amazing factory. Its facilities are aligned with Fiat’s business plan for the next five years, announced in May by FCA’s CEO, Sergio Marchionne, featuring the introduction of new models and a further increase in production. Betim is being prepared for the new challenges and needs it may face in the near future.

JP: Is it difficult to increase capacity at a plant which is several decades old?
AL: It’s a big challenge, especially if you consider that we are adding capacity which matches a new factory – around 150,000 vehicles a year. But we manage all the complexity of our current operations and construction work by applying the concepts of World Class Manufacturing (WCM), the production system adopted by Fiat Betim in 2007.

An extremely important action to achieve results is the involvement of all the people, beyond the strict application of methods and standards; in an environment such as Betim, people are the major force of the entire production system. Our endeavour is to constantly increase the technical, managerial, operational and methodological skills, valuing leadership, revealing talent and developing results.

These strategies have enabled us to achieve excellent results in both 2012 and in 2013: increasing our productivity by 18%, with a significant reduction of transformation costs; improving the quality of our product by 14%; and improving our logistics services by 26%. 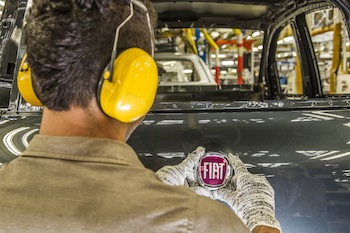 JP: At Betim you have also insourced material handling and line feeding; what results have been achieved by these changes?
AL: The insourcing was a great success. We faced the challenge by applying new concepts of line feeding and material handling, guaranteeing the integration of people and creating robust logistics engineering to address the great complexity of this factory.

JP: In addition, Fiat is building a new plant at Goiana, Pernambuco.  What range of facilities will be at this site and which models will be made there?
AL: Fiat’s plant in Pernambuco, its second facility in Brazil, will be the centre of a highly integrated automotive industrial hub, including a supplier park which will provide 17 strategic lines of components. It’s a complete factory, with presses, BIW [body-in-white], paint, assembly and a communications centre. The plant will have a modern, optimised layout, with material and product flow designed to the highest WCM standards. It will start production at the beginning of 2015. Three models will be produced there; the first will be the Jeep Renegade.

JP: How important will it be to have a large supplier park at Goiana?
AL: The proximity of the supplier park brings logistical advantages and will permit just-in-time (JIT) and just-in-sequence (JIS) operations; this situation will provide huge advantages of cost and time. Installing the park simultaneously with the construction of our plant also represents an opportunity for integrating processes and creating a world-class production cluster.

JP: Looking at a government initiative such as Inovar-Auto in Brazil, do you as a car manufacturer regard this programme as problematic or positive?
AL: This programme is positive and we supported it since the beginning. It incentivises R&D and also the production of more energy-efficient vehicles with lower emissions. We are focused on these priorities. For example, the New Uno with 1.4-litre engine has earned an A grade at PBEV 2014 (Brazilian Vehicle Labelling Programme). This car emits 97.4g of fossil CO2 – a figure below Inovar-Auto’s targets for 2017 and current European laws. It’s worth adding that 97.5% of the vehicles sold by Fiat in Brazil are flex fuel, ie they can run on gasoline but also on ethanol, a fully renewable fuel that practically neutralises CO2 in the atmosphere through the planting of sugar cane. 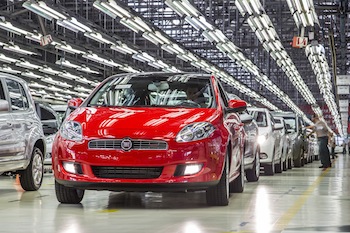 JP: Do you agree that the car manufacturing landscape in South America is becoming significantly more competitive with the arrival of other OEMs such as JAC and Chery?
AL: Brazil has become a good place for investment and the automotive industry attests this. Its market was opened up to imported vehicles in 1992 and from that moment on the competition has only grown. In that year, there were five companies manufacturing in Brazil. Now, there are 16 carmakers with domestic production. In 1992, 25 models were offered in the market; last year, there were 220. In the 1990s, 98% of the sales were shared by four big companies: Fiat, VW, GM and Ford. Since then, the participation of these big four has dropped to 67%. However, Fiat’s sales have been kind of stable since 1994. Now, the company has around 22% of the Brazilian market.

JP: Looking to the future, do you expect Fiat’s capacity and production volumes to increase in South America in the mid to long-term?
AL: LATAM sales should increase through the next five years on the strength of new product offerings. Last year, we sold around 900,000 units in the region. We plan to increase by 43% – 400,000 units – until 2018. This way, we aim to reach 1.3m units sold in this market, meaning a 22.4% share. In this scenario, Fiat and Jeep brands will be the key drivers of LATAM volume growth. We estimate a sales increase of 220,000 units for Fiat and 180,000 for Jeep by 2018; Fiat will sell 1.1m cars and Jeep 200,000 in Latin America.