Upgrade and investments at Burnaston see Toyota start production of the new Corolla in the UK, despite all the turmoil of Brexit 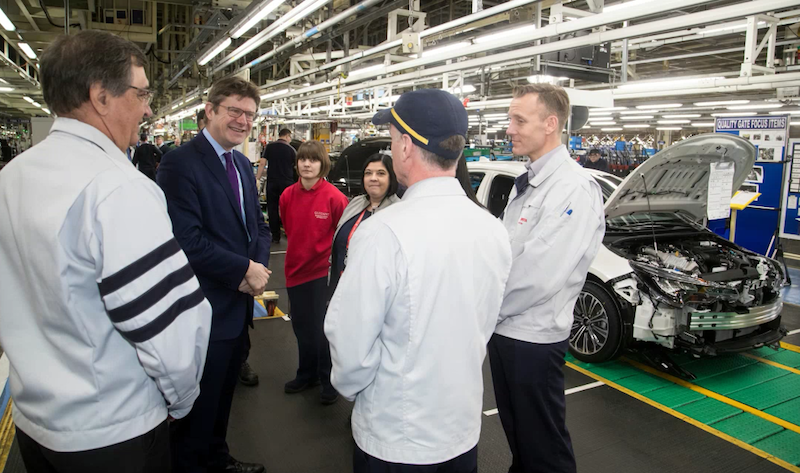 The UK secretary of state for business, Greg Clark, and the straight-taking Japanese ambassador to the UK, Koji Tsuruoka, joined local dignitaries, business leaders and Toyota executives in January, to mark the official start of production of the all-new Toyota Corolla. While this significant development for UK vehicle production was taking place, the UK political system was convulsed with debate over the UK’s soon-to-be rejected proposed EU withdrawal agreement and what this meant for Brexit.

For Toyota it meant it was starting production of a new model which is crucial to its European plans at the same time as UK vehicle production is sadly facing unprecedented change and uncertainty. Greg Clark described the new investment as “testament to (the UK’s) proud manufacturing heritage”. Dr Johan van Zyl, President of Toyota Europe, was fulsome in his praise of the factory’s “highly qualified workforce” and emphasised how the new models would “play a critical role in (Toyota’s) market ambitions in Europe”.

The spectre of a Hard Brexit – with the likely imposition of 10% tariffs on finished cars and delays to finely tuned international supply chains inevitable – looms large over the industry as a whole. With production of the Corolla, c80% of which is destined for the EU and more for markets with which the EU has trade agreements, due to ramp up quickly over the first quarter of the year, Toyota could well face production and market access disruption just when full production rates would be expected to be reached.

Such a development would cast a cloud over the programme which has seen £240m invested by Toyota, supported by a £21m grant from the UK government. The new Corolla is made on the new TNGA-C architecture which also underpins the C-HR (made in Turkey) and which is being rolled out across various Toyota plants worldwide.

Several areas of the UK factory have been upgraded to facilitate the launch of the Corolla, including the introduction of aluminium stamping capability, a new plastic parts painting line and the installation of more robots across the factory. Around 130-140,000 vehicles are expected to be made each year, although whether Brexit disruption will affect volumes in the first year of production remains to be seen.

Turning to the areas of the factory which have been upgraded or seen new investments, the key results of the recent investment are:

Here, Toyota has made number of significant improvements to its existing large press lines to allow aluminium body parts to be pressed alongside steel. Central to this has been changing the inter-press handling equipment from magnetic grippers (suitable for steel but not aluminium) to robots. In parallel, the presses themselves and their surrounding areas have been deep-cleaned and refurbished to prevent dirt and residues from the stamping process being deposited on the aluminium panels to avoid problems with later painting stages.

200 high-speed robots for the welding line

The new Corolla has many more welding points than the previous Auris, resulting in much higher structural rigidity on the new model. To achieve and maintain line speed, 200 new high-speed robots have been installed in the welding shop. And further down the line, additional robots have been installed to apply under the damping coat, a material which also helps with body corrosion protection. In total 24 new robots have added to the paint area, working on the underbody, and in sealer and frame wax application.

Unlike European car companies, the Japanese manufacturers tend to have some of the major plastic parts, dashboards and bumpers typically, made in-house. Toyota is no exception to this practice and to facilitate the manufacture of a new design of rear door, improvements have been made to plastics manufacturing hall at Burnaston. At the centre of this is a new rear door, with plastic inner and outer panels. These panels are moulded, glued together and then painted in a new automatic paint line in the plastic shop; previously plastic parts were largely manually painted. Toyota decided to adopt the plastic door structure for the enhanced styling and aerodynamic benefits which this gave over steel.

For the new Corolla, a re-designed engine sub-assembly area has been installed. Three petrol engines are offered, a 1.8l hybrid unit from Toyota’s Deeside plant in north Wales, and two (a 1.2l non-hybrid and a 2.0l hybrid unit) from elsewhere in the Toyota network. As well as full engine dressing on this line, the main front suspension, radiator and hybrid inverter sub-assemblies are now married in this area of the factory, so that the entire larger assembly can be fitted at one point on the assembly line. On the previous model the engine, suspension, radiator and hybrid unit were fitted individually at different stations on the assembly line.

These manufacturing improvements and upgrades represent the latest step in the Burnaston factory’s evolution. It first produced vehicles back in 1992, making the Carina E. At its peak, prior to the financial crisis, the factory was running two assembly lines, making the Auris (the Corolla’s predecessor) and the Avensis, which has now finished production.

The decision to allocate production of the Auris to Burnaston was announced in 2017, after the UK had voted to leave the EU, the market so crucial to the factory’s success. Like all other UK car manufacturers, Toyota has been clear that unfettered access to EU markets, and the ability to source parts on a just-in-time basis, are essential to the factory’s economic health.

With more than £2.75bn having been invested in the factory since 1992, Toyota’s commitment to the UK is clear; whether the success of the new model will be hampered by political events beyond its control will be determined over the coming months.

Car plants are very fixed entities and even with a Hard Brexit, the company could not simply up sticks and leave the UK; however, in the long run, how much more will be invested here once the new model comes up for renewal and replacement will be decided once the post-Brexit environment is clear. Toyota, and its employees, will hope that it favours, or at least does not hinder, manufacturing vehicles for the EU in the UK. Only time will tell if the faith is to be rewarded.