Opening its first factory in the country, Renault is keen to follow where Alliance partner Nissan has led 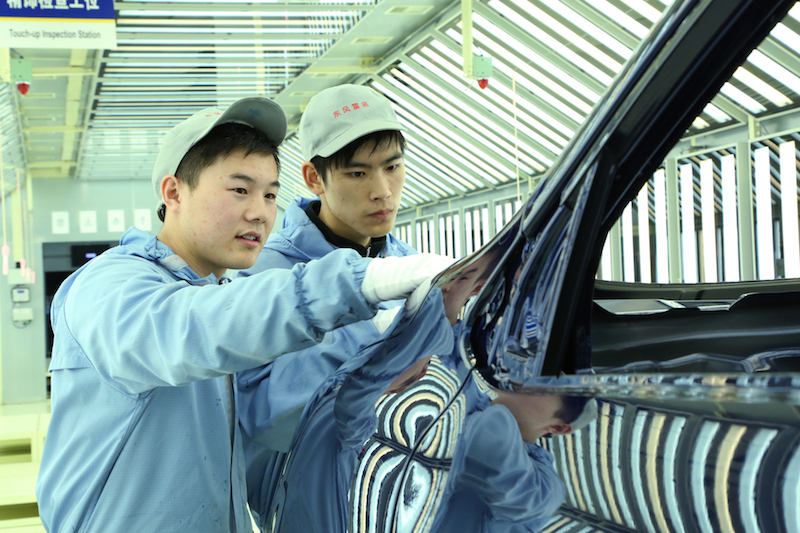 Better late than never. That was the message from Renault's top-brass at the inauguration of its first-ever factory in China. Renault-Nissan Alliance boss Carlos Ghosn told journalists at a ceremony in Wuhan, central China, that the company’s target is a highly ambitious 3.5% market share, equating to over 700,000 vehicles, up from just 23,000 last year. He did not give a timeframe, but the target will be a big ask since Renault is ramping up volumes just as the China boom years of 10% growth seem to be over; vehicle sales climbed 4.7% in 2015 to 21.1m as demand started to level off.

However, this is no speculative leap into the unknown by Renault. For a start, the brand is piggy-backing its locally successful sister brand, Nissan, borrowing everything from vehicle platforms to its joint venture (JV) partner, Dongfeng. Renault’s greenfield factory in Wuhan, often dubbed ‘China’s Detroit’, is a copy of productive local Nissan plants, most notably Guangzhou in the country’s south-east, not far from Hong Kong. Indeed, one information chart in the new Wuhan plant describes the paintshop as being a "copy/paste” from the one in the Guangzhou facility. Similarly, the engine casting plant is replicated from Nissan-Dongfeng’s plant in Zhengzhou, Henan province.

“Everyone involved recognises that synergies are critical to its success,” Ghosn said in his ceremony speech. “We expect it to be a highly successful joint venture.”

The link with Nissan’s Guangzhou plant is strongest because the car that Renault is building initially, the Kadjar compact SUV, is based on the same platform as the Nissan Qashqai and the larger X-Trail SUVs built to the south. Renault will launch a second SUV based on the X-Trail later this year, and the company hopes the combined sales will bring the plant to its current capacity of 150,000.

Since Renault shares so much with Nissan, Renault management is claiming that the Kadjar has a localisation rate of more than 80%, which is impressive for a brand starting from scratch in a new country. The local sourcing is helped by the fact that Renault will build a 2.0-litre petrol engine onsite, making Wuhan one of just four Renault plants with their own engine casting facility. However, the percentage of parts sourced locally could fall later in the year when a more tax-efficient, 1.2-litre petrol turbo unit is imported from France.

Renault is betting that the fast-growing Chinese SUV market will remain buoyant. According to the OEM's figures, last year the segment expanded by 53% to 6.9m vehicles, 28% of the total market. Overall, China’s market grew by 4.7% in 2015. One issue might be that much of that growth is coming from local makers building cheaper models than the foreign brands are selling, but Renault will take comfort from the fact that the Nissan X-Trail was one of the few foreign SUVs in the segment top 20 to grow sales in China last year.

Staffing the siteThe Renault plant currently has 2,000 staff, due to rise to 3,000 by the end of the year. And they are young. Renault says that 95% are under 35 and the average age is 25. Of those, 16% are women, a figure that Renault says is in line with the Chinese automotive industry average. Many live at the complex; 800 are accommodated in three dormitory blocks near the supplier park which lies by the site entrance.

Of the 2,000, the Dongfeng-Renault JV says it trained 560 last year at the four Chinese factories run by Dongfeng-Nissan. Dongfeng-Renault reckons it has carried out 435,000 hours of training in total – more than an average greenfield plant, the company believes.

The Sino-French JV has staffed the ten main departments – overall management, projects and programmes, product planning, R&D, industrialisation, finance, purchasing, human resources, sales and marketing and IT – with two heads each, one from Renault, the other from Dongfeng. The systems used are a mix from both companies. Vehicle design and development is, naturally, from Renault but the manufacturing and logistics set-up is borrowed from Dongfeng-Nissan. The HR and sales and marketing systems are Chinese.

Expansion, if the Chinese say yesRenault says the plant's capacity can be doubled to 300,000 and even go to 360,000 if needed. But that would require more models than just the two SUVs, and at the moment Renault does not have permission from the government to build anything other than SUVs.

“They want to see us succeeding before authorising us with a new licence. That’s our mindset as well. Succeed with the SUVs, then the market will open,” Thierry Bollore, Renault’s chief competitive officer, told journalists at the opening ceremony. Renault expects several years to pass before that happens.

The company is obviously confident that this will indeed occur. At the plant, a wall-mounted, 3D overview of the 95-hectare site shows a near doubling of the building space in the second phase. Travelling around the site, built on former vegetable fields, we could clearly see where the JV intends to locate new buildings.

And what will they build? Sedans is the only answer we were given. The plant has the ability to build four models on two platforms, so the two sedans cannot be too different in size. One possibility is a version of the Talisman D-segment sedan, recently launched in Europe, with a replacement for the Fluence sitting underneath it.

Stamping and bodyshopThe stamping hall has one giant, high-speed automatic press line with a total of 5,400 tonnes. We were not told which company makes it, only that it was a local supplier and that the Nissan plant in Guangzhou has one as well. The tonnage is split into three presses of 1,000 tonnes and a final 2,400-tonne press shaping the steel panels. The panels are then manually loaded onto trolleys, coloured pink if they are for the Kadjar SUV. The 12,270 sq.m site has 40 staff, but both those numbers will rise in the planned expansion, which will add another two press lines.

Renault also has a plastics press hall, featuring a 3,300-tonne, ‘double-bolt’ injection-moulding machine, which the OEM reckons is the first in China and only the third in the world. The bodyshop has 139 robots and an automation level of 49%, which is quite low in such a new plant. The GM-Shanghai factory in Wuhan, for example, claims 97% automation in its bodyshop, while Nissan-Donfeng’s Dalian plant is said to be at 83%. It is rare these days to see so many of the bodyshop workers (of whom there are 221) operating manual spot-weld machines, but it might just be a hedge in case the SUV sales do not take off as intended. We were told that the second-stage expansion, which will grow the 23,625 sq.m site, will increase the bodyshop automation.

Paintshop, assembly and powertrainThe paintshop covers 19,500 sq.m and has 90 employees working a maximum of 30 jobs per hour. Of the 7.76 billion yuan ($1.19 billion) investment into the plant, this facility took 520m yuan. It is a copy of Nissan’s paintshop in the Guangzhou factory and has four lines: pre-treatment, sealant (with ten robots for underbody application) topcoat (12 robots) and lastly an inspection line.

The assembly hall has 136 stations with a takt time of two minutes at full capacity. In total, 360 people work here. The plan is to be making 207 units per day of the Kadjar and 400 when full-scale production of the new D-SUV starts in September. Then a second shift will be added.

The engine plant employs 250 people in casting, machining and assembly. It makes both the block and the head, which is otherwise done only by Renault’s plants in Cleon and Le Mans in France and Pitesi in Romania.

Low-investment in electric carmakingThe Chinese government requires all carmaking JVs to launch a new Chinese car brand alongside the foreign nameplate, and include a ‘new-energy’ electric vehicle in the line-up. Renault will comply using one of Dongfeng’s registered but currently unused brands (we were not told which) and affix the name to the Renault Fluence EV, which they will build in Wuhan. However, Renault’s low level of investment in the production of this car at Wuhan matches its modest sales expectations, amounting to "a few thousand” a year, according to Renault’s Bollore. The car will be assembled from kits imported from the plant in which it is currently made, Renault Samsung’s Busan plant in South Korea. It will not run along the main SUV assembly line but instead be screwed together in a separate building onsite. 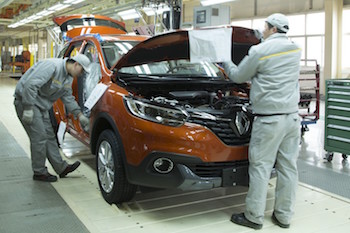 In building the Kadjar at Wuhan, Renault is confident that the fast-growing Chinese SUV market will remain buoyant

It will be lucky to achieve even a few thousand sales. Nissan’s electric car, based on the Leaf and sold under the Nissan-Donfeng brand Venucia, chalked up sales of just 1,273 last year, according to figures from the China Association of Automobile Manufacturers (CAAM).

Manufacturers are forced to make the commitment to electric cars, and although Chinese sales look buoyant (379,500 in 2015, including plug-in hybrids) the majority are tiny urban runarounds costing thousands of yuan less than the Venucia E30 or Renault’s electric car when it arrives next year. Renault-Nissan boss Carlos Ghosn wants to change tack and developed a low-cost EV to compete. He told journalists: “We have great electric cars but they are too expensive. For me, the solution is going to be a very frugal, cheap electric car.”

Wuhan: China's Detroit?This year, Wuhan will have the capacity to build 2.4m cars, up from 1.8m last year, according to Renault’s JV partner, Dongfeng. Should it achieve that figure, it would come close to matching Detroit, which in 2014 made 2.3m cars. The majority are Dongfeng cars. The local manufacturing giant has put this city, the capital of the central Chinese province of Hubei, on the automotive map. The state-owned company, formerly the Second Automotive Works, was a heavy truck-maker but made its name in cars back in 1992, when it partnered with France’s Peugeot-Citroen (PSA). That relationship continues today, and Dongfeng and PSA now operate three plants within Wuhan. The relationship is so close that in 2014, Dongfeng agreed to buy a 14% stake in the then-struggling French maker.

Along with PSA ,and now Renault, Dongfeng also builds cars with another maker in Wuhan: Honda. The Dongfeng Honda Automobile JV opened its second plant in the city back in 2013. Dongfeng does not have a total monopoly on car manufacturing in the city. In 2015, General Motors and partner SAIC (operating as Shanghai GM) opened a plant here, building the Buick Excelle.

The advantages for carmaking in Wuhan are four-fold, according to Hu Xindong, executive vice-president of Dongfeng Renault Automotive Company (DRAC). The costs of construction and labour are lower in Wuhan than for the bigger east-coast areas such as Beijing and Shanghai. Also, Wuhan is growing faster as a car market, so theoretically Renault will be building closer to where it sells. Wuhan has a population of around 10m, the 12th largest in the country and the second-largest in central China.

And lastly, says Hu Xindong, Wuhan’s traditional status as a transport hub still holds in terms of logistics. DRAC executive vice-president Jacques Daniel dislikes the comparison with Detroit, despite that city’s return to 2000s levels of production: “Is it China’s Detroit? I hope not.”