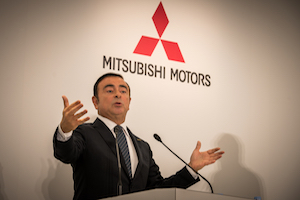 As the end of the year approaches, news from Japan has emerged about what Nissan – or more specifically, Carlos Ghosn – intends to do with Mitsubishi. Japanese corporate law allowed Nissan to take control of its troubled compatriot by acquiring just 34% of the company for 237 billion yen ($2.3 billion). Although only ratified in December, this was announced earlier in the year when Mitsubishi admitting to falsifying various emissions results for a range of small kei cars which it sells only in Japan. Nissan’s immediate involvement was in large part due to the fact that Mitsubishi supplied some of the affected cars for sale as Nissans.

Having cut costs at Renault, done something similar at Nissan and engineered a far-reaching alliance between the two companies, Ghosn has since led them to take control of AvtoVAZ in Russia and into another wide-ranging and ambitious alliance with Daimler. Bringing Mitsubishi into the fold is another step along the way to creating a global automotive group to rival Toyota, GM and VW, albeit without also creating one single entity. Ghosn’s 'Plan B' appears to be working.

Mitsubishi brings expertise and market presence which Nissan lacks or where it is sub-scale, notably small kei cars, pick-ups (in which the Mitsubishi L200 is regarded as one of the market leaders) and a wide presence in ASEAN markets, especially in mid-market crossovers. In reverse, it is expected that the Renault-Nissan CMF-C platform will be the basis of a number of new Mitsubishi models, notably the replacement for the Lancer. The next Nissan Navarra pick-up (and presumably therefore the Renault and Mercedes equivalents) may well be co-developed with the Mitsubishi L200, while an additional lifestyle pick-up based on the Mitsubishi Pajero Sport is a possibility for Nissan. Operationally, the sharing of purchasing and logistics is expected and there may also be some co-production in underutilised plants, especially at Mitsubishi factories in Asia. Longer term, it is conceivable that a Nissan plant could be used to produce models for Mitsubishi in Europe or North America, regions where Mitsubishi is currently marginal.

There would appear to be no intention of killing the Mitsubishi brand – in fact, the plan is for Mitsubishi to retain its own indentity and branding, while Nissan will root out the cultural and personnel problems which led to the falsifying of emissions tests; there is a recognition that the cover-up culture is deep-seated at Mitsubishi and this needs to be tackled.

Given his success in transforming both Nissan and Renault, it would be unwise to bet against Carlos Ghosn pulling off the trick of transforming Mitsubishi from a marginal player into a rather different and all together more dynamic brand over the next few years. One wonders if Ghosn could have worked his magic elsewhere; for example, could he have saved Australia’s automotive manufacturing sector?

Possibly not, but he – and many others – will have noted with some sadness the end of production by Ford Australia during 2016, with the same to follow at GM’s Holden and Toyota Australia too in 2017. No more rear-wheel-drive Aussie muscle cars with throbbing V8s; instead, Holden aficionados will have to accept the German-made replacement for the Commodore, a front-wheel-drive V6 Insignia. It is a worthy car, no doubt, and more in keeping with the environmentally-friendly age in which we live; engine and vehicle downsizing are all the rage and entirely necessary. All the same, a bit of automotive history and heritage has gone with the end of the Australian manufacturing sector. And it won’t be back.