Eight different models are made at DTNA’s Cleveland plant, and a high level of customisation means that thousands of options are available to customers. Michael Nash reports

Eight different models are made at DTNA’s Cleveland plant, and a high level of customisation means that thousands of options are available to customers. Michael Nash reports 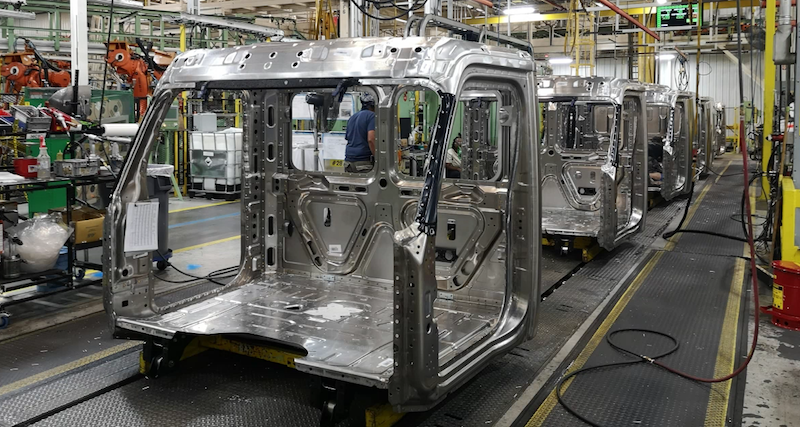 Daimler Trucks North America (DTNA) produces eight different models at its Cleveland Truck Manufacturing Plant in North Carolina. It is primarily an assembly facility, with most components made by various suppliers and at other DTNA facilities before they are shipped to Cleveland and assembled together.

The new Cascadia was added to this already extensive portfolio in January 2018, though the model was launched back in September 2016. Speaking to AMS, Roger Holden, Quality Engineer at the Cleveland Truck Manufacturing Plant, explained that production of the model originally began at the company’s plant in Saltillo, Mexico. “And then we started making it here in order to keep up with the overwhelming demand,” he recalled. “We had initially planned a slow ramp up, but we’ve gone from about one a day in January to many more than that.”

This has not been without its challenges. For example, a second shift had to be added at the plant, meaning that 700 new workers were employed.

The new Cascadia now accounts for the majority of the vehicle mix made at Cleveland. “It is a production-friendly truck,” Holden stated. “It is well designed and engineered from a manufacturing point of view. An example of this is reflected in the cycle times for our chassis lines. We run two distinct lines at Cleveland with different product focuses on both lines.”

The line that runs the Cascadia has a shorter cycle time than the line that runs the other Freightliner models alongside the Western Star models. This is due to the fact that “some of these models are complex so they take slightly longer, and we fill spaces in front and behind with production-friendly Cascadia models,” Holden added.

The trucks also have varying production processes. One of the differences during the assembly of the Western Star models, for example, is when the cab interior is being pieced together. The cabs on the Freightliner models have an “open front,” which means that materials can be easily reached by the worker inside. “The Western Star models, on the other hand, are closed, so all the materials must be passed carefully through the windows or doors.”

Another complex process is the tie-up of electrical systems and fuel lines, though this is common across all the models that DTNA makes at its Cleveland plant. Holden revealed that it is “the single most time-consuming process during assembly, as we have to prevent any rubbing on any surface because it can lead to a failure.” This could become even more challenging as more electrical components enter the vehicle - a trend spurred by rising demand for connected features and the introduction of sophisicated safety systems as well as autonomous driving functionality. Daimler has been a flagbearer in many of these areas, particularly the latter with the Mercedes-Benz Future Truck 2025 and the Freightliner Inspiration Truck.

Referring back to January 2018, Holden creditted his colleagues in Mexico for playing an important role in ensuring everything went smoothly when Cleveland started making the new Cascadia: “We’re saying it’s a very production-friendly truck, but the Saltillo plant originally started making it and they have given great direction regarding processes notifications. Collaboration between Saltillo and Cleveland was brilliant – we went down there, myself included, to see their processes and figure out how best to build the new Cascadia here. This meant that things started off very smoothly in terms of the production processes when it came to making the new Cascadia.”

A theme that is evident throughout each area of the plant – be it bodyshop, paintshop or assembly – is DTNA’s ability to produce highly customised vehicles. The facility takes shipments of near complete Detroit DD13, DD15 and Cummins engines, all of which are tested on a dyno before they arrive. However, workers are tasked with fitting a variety of accessories just before they are married to the chassis, such as starters, alternators, AC compressors and radiators.

The reason for this last-minute assembly, Holden explained, is that each of the engines is customised and matched with a certain chassis and cab, all of which fit the specifications of individual customers. “There are hundreds, maybe thousands of options that our customers can choose from,” he stated. “That’s one of the things we pride ourselves on here – the ability to offer exactly what our customers want. It would be great from a production efficiency point of view to churn out all of the same trucks in one day, but we do not have a cookie-cutter basic truck. They are all individually specified to order, based on customer needs and demands.”

The high variation of models produced at Cleveland also means that manual workers are needed at certain steps that may be automated in other plants. Before the chassis is painted, for example, it is subject to a three-step washing and de-greasing process to remove impurities. After passing through a drying tunnel, all of the ground and wheel studs are taped up, as are all open fittings, electrical components and airbags. This is carried out by hand. Only once all the systems are securely taped can the chassis enter the paint booth, where workers also apply paint manually.

“We have so many chassis variants going down the line here,” Holden emphasised. “We have long ones, short ones, wider ones. Again, there are so many different options, and I don’t know if it is possible to have a paint programme that would hit all of the cracks and crevices of the chassis, so it must be done manually.”

The customisation of models requires a long process that starts at the dealership. A customer will typically outline a set of requirements before the information is relayed to DTNA’s customer application engineering group, who then build a specification sheet for each order. The information is then be passed on to engineering, supplier management and finally on to the plant so that it can be used as the guide for the workers during assembly processes.

Aside from providing customers with various different options in terms of performance, DTNA offers numerous cab configurations with the latest Cascadia. At the 2017 North American Commercial Vehicle (NACV) show, the company announced that it would have 48-, 60- and 72-inch mid-roof XT sleeper cabs in both 116- and 126-inch BBC platforms. Shortly after, the OEM said it would offer a 60-inch raised roof sleeper model in both 116- and 126-inch BBC platforms, featuring a lower bunk with storage underneath and a longer wardrove cabinet.

Furthermore, customers have the option to install a number of various different technologies if they wish to have them. For example, in March 2018, DTNA launched a new battery-powered heating, ventilation and air conditioning (HVAC) system that provides up to ten hours of cooling or 34 hours of heating to the cab when parked. This system can be factory fitted. It replaces the previous ParkSmart system, and is available on all sleeper sizes and bunk styles.

The variation from truck to truck means that the assembly lines at Cleveland must be flexible, allowing the different cab sizes and vehicles with various technologies to flow through each station without hindrance or delay. To keep on top of this, DTNA installed an andon system at Cleveland.

“If an assembler has a problem, he or she hits the andon and it alerts management,” Holden said. “It could be a quality concern, it could be a missing part, whatever. We strongly encourage employees to use it so that we can be sure the line is functioning and that the trucks are being built as they should be.”

Change continues to take place at Cleveland. As well as ramping up production of the new Cascadia, DTNA has also recently earmarked US$27m to build a new logistics centre on site. Construction of the 100,000 sq.ft facility is well underway, and is expected to be completed in early 2019. It marks the 12th expansion made to the Cleveland site since opening back in 1989.Holden explained that the centre will help to consolidate multiple existing warehouses, allowing for more efficient conveyance of parts to the assembly lines and potentially freeing up space for new projects.

“Much of the kitting for our Western Star parts is carried out at the warehouse where are engines are located,” he noted. “It’s only 12 miles away, but when you’ve got trucks going down the line and an issue with the kit – if its missing a part for example – then that 12 miles seems like an eternity. We’re planning to do all of our kitting in-house at the new logistics centre, which will eliminate those headaches.”

The potential opportunities that are opened up by the new logistics centre don’t stop there. Holden also toyed with the idea of further increasing production of the latest Cascadia once the centre is finished. “In 2005 or 2006 we were building trucks on three shifts, so we were operating 24 hours a day. It really took its toll on the equipment and also limited the window of opportunity for maintenance. So if we wanted to, we could bring in additional labour on our second shift and increase capacity, or we could go to three shifts.”

One of the key trends in the industry is electrification, which could have a considerable impact on vehicle manufacturing facilities around the world. In May 2018, Daimler unveiled two fully-electric trucks from Freightliner, one of which was called the eCascadia. The heavy-duty truck has been designed for long-distance operations, with the batteries providing a range of up to 400km. The other electric truck, called the Freightliner eM2 106, is intended for local distribution operations and last mile delivery. Whether or not the future launch of these models has a bearing on the Cleveland facility remains to be seen, but Daimler is evidently keen to be a leader in the field.