South Africa's automotive industry has emerged onto the world stage after increased investment from the likes of BMW, Mercedes and VW. Moreover, the country has now attracted the attentions of a Chinese OEM 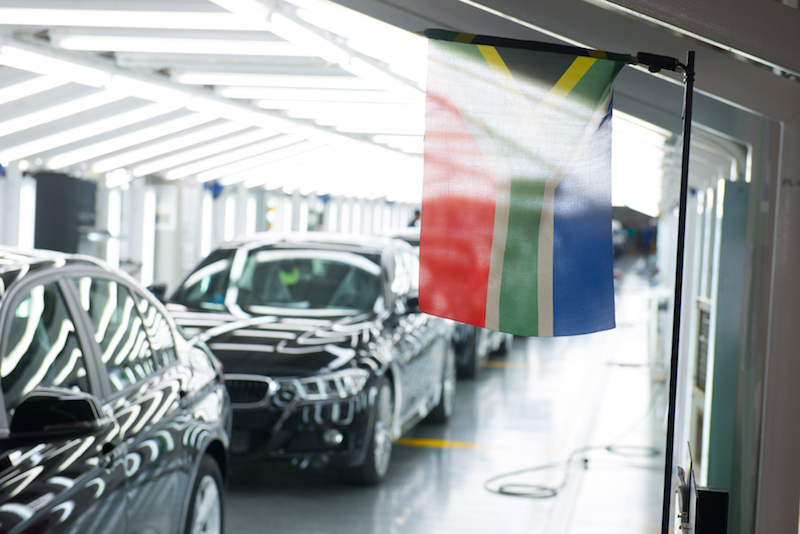 The automotive industry has played a central role in the economic and industrial strategies of successive South African governments in the post-apartheid era. While several vehicle manufacturers had operations in the country in the days of its isolation, these factories were glorified kit plants and served only the local market. Since 1995, first through the Motor Industry Development Plan and later the Automotive Production and Development Programme, the government has tried to provide a structured environment for automotive companies to invest and build a global position for their South African factories.

The industry’s emergence on the world stage has been driven by the expansion of BMW, Mercedes and Volkswagen (VW), whose South African plants make vehicles for Europe and other major markets. More recently, Ford and Toyota have allocated global roles for their factories in the country, while Nissan and Isuzu (which has acquired GM’s Struandale facility) still use their South African plants principally as national and sub-Saharan supply points. In addition, China’s BAIC is currently building a new factory to make up to 100,000 vehicles in Port Elizabeth – the country’s biggest single investment in the automotive industry. Significantly, this plant will be part-owned by the South African government, which will take a 35% stake through the Industrial Development Corporation. 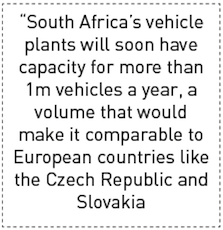 South Africa’s vehicle plants collectively have the capacity to make over 900,000 vehicles a year but this total will soon exceed 1m, a volume that would make it comparable to European countries like the Czech Republic, Slovakia and Turkey, and put it well ahead of Poland, Hungary and Romania. The fact that some South African plants are fully integrated into global vehicle programmes and, in the case of the three German brands mentioned above, can also be seen as part of their European supply network, reinforces South Africa’s importance in the industry.

The South African market alone is not sufficient to absorb all the vehicles that could be made in the country, and the government certainly sees the industry as a significant generator of foreign exchange earnings; nearly 345,000 vehicles were exported in 2016 and a 10% rise is expected in 2017. Europe is the principal destination for South African output, with nearly 174,000 vehicles reaching Europe in 2016, a significant uptick from 116,000 a year earlier.

Currently, Mercedes exports over 90,000 C-Class sedans and estates per year to 80 countries, while VW exports around 60,000 Polos, many of which go to the UK. In fact, around two-thirds of the Polos sold each year in the UK are made in Uitenhage, with the remainder coming from Pamplona in Spain. In the pick-up market, European demand for the Ford Ranger and Toyota Hilux is now met from South Africa, rather than Thailand, which has long been the centre of one-tonne pick-up production for many vehicle companies.

BMW to focus on SUVsThe Rosslyn plant near Pretoria took its first global role within BMW in 1998 when it was allocated production of the E46 3-Series sedan for a variety of markets which could be easily supplied from South Africa. BMW is currently in the midst of a six-billion-rand ($435m) investment programme at Rosslyn to make the X3 SUV from 2018, which is a year ahead of the original schedule. Production of the X3 for global markets will be shared with Spartanburg in the US, while production of the 3-Series sedan now made in South Africa will shift to BMW’s new plant at San Luis Potosí in Mexico.

Rosslyn made around 72,000 3-Series in 2016, of which 80% were exported. A similar ratio is planned for the X3, and this will include sending kits for assembly in South-East Asia, where BMW has a number of completely knocked down (CKD) operations. To facilitate production of the X3 in Rosslyn, BMW is investing 400m rand across the plant, including a new bodyshop which will be 50% bigger and have 50% more robots than the old facility; a modernised paintshop; and improved inbound and outbound logistics. BMW wants to achieve a higher local content level for the X3 compared with the 3-Series, which currently has around 38% South African content. The aim is to increase it to 60%, but this will be a major challenge without the local production of engines, transmissions, most electronics and active safety systems.

Mercedes adds hybrid and AMG modelsThe factory in East London is one of four facilities which make the current C-Class; the others are Bremen (Germany), Beijing (China) and Tuscaloosa (US). Like BMW, Mercedes developed its plant from being a kit operation for the local market into a full manufacturing operation in the late 1990s. Since then, it has made the C-Class both for the local market and exports.

The factory has recently finished a 200m rand extension to allow production of high-performance AMG models alongside standard models; it now makes C3 and C63 models in both left- and right-hand-drive. East London has recently started manufacturing the plug-in hybrid version of the C3, the first hybrid made in the country. The plant has a total production target of 114,000 units a year.

VW goes to two shifts for Polo productionThe plant at Uitenhage is a key location in VW’s global network, having received investment of 5.5 billion rand to make the new Polo, with production scheduled to start in 2018. This model will be made on the same MQB AO platform to be used at Pamplona, Spain, the lead Polo plant. Uitenhage has an official capacity of 120,000 units a year – it actually made 123,000 in 2016 – but this is due to rise to 180,000 as part of an enhanced global role in the supply of the new Polo. The factory will move to two shifts, five days a week, with two assembly lines merged into one.

Approximately 60% of Uitenhage’s output is exported. As well as making the Polo for global markets including the UK, which takes around two-thirds of its Polo needs from South Africa, the factory also makes the Polo Vivo, a version targeted at emerging markets. This now includes sending CKD kits to Kenya.

Nissan runs well below capacityThe plant in Rosslyn, near BMW, currently makes mid-market compact cars and pick-ups, namely the NP200 half-tonne and the NP300 one-tonne (hardbody) vehicles. Recent reports have suggested that the plant will make a new NP300, using the same platform as the Nissan-Renault-Mercedes pick-up at Nissan Barcelona, Spain, and Renault Córdoba, Argentina. However, such an announcement has been expected since 2014 and has not yet been made. The factory also produces the Nissan Livina crossover and Renault Sandero (Dacia models are sold under the Renault brand in South Africa).

Toyota invests for Hilux and FortunerThe primary role of the plant at Prospecton, near Durban, is the production of the Hilux pick-up and Fortuner utility vehicles; the former is exported to Europe and other markets beyond Africa, whereas the Fortuner is made primarily for the local and sub-Saharan regional markets. In recent years, 6.1 billion rand have been invested to make the current versions of these models. Production for the local market also includes the Corolla hatchback, Corolla Quest sedan and Quantum bus, plus a small number of Hino and Dyna trucks which arrive from Japan in SKD format.

The recent 6.1 billion rand investment was partly for tooling, with 1.9 billion rand for supplier tooling and 1.4 billion rand for in-house tooling, including for the assembly of bought-in components. The balance went into improvements in factory layout and the installation of new presses. Like other Toyota plants worldwide, the plant makes many of its own components and also carries out much of the subassembly work, which elsewhere is contracted to suppliers. Thus, the factory produces instrument panels and bumpers, but also exhaust assemblies, brake and clutch assemblies, catalysts, and both rear and front axles.

Toyota South Africa has made a major effort to increase local sourcing on the new Hilux and Fortuner models. The previous-generation models had around 1,500 locally sourced parts; the new ones have about 2,700. To enable this, suppliers have invested 1.7 billion rand in their local operations, creating 2,000 new jobs.

In parallel, Toyota’s assembly capacity has risen from 120,000 to 140,000 units a year; the Hilux and Fortuner account for 80% of production, with 55,000 of these models exported to 74 countries last year (43 in Africa, 28 in Europe and three in Latin America). The plant also supplies components to Toyota Thailand for use in the Thai-made Hilux, Fortuner and Innova. 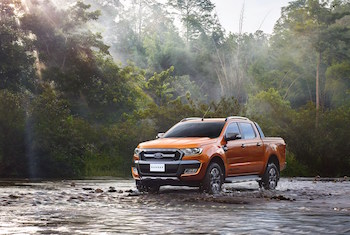 The Ranger has been made at Ford Silverton since 2008

Ford supplies Ranger worldwideThe product portfolio of the factory at Silverton, near Pretoria, has been overhauled in recent years, changing from pick-ups and ‘old-generation’ cars for the local and regional markets to pick-ups and SUVs that are part of modern global vehicle programmes.

The plant has made the Ranger pick-up since 2008, supported by investment of 3.4 billion rand; a further 2.5 billion rand were invested to make the Everest SUV, production of which started in Q3 2016. Capacity for the Everest is just 10,000 year, the majority of the plant’s 110,000 units being allocated to the Ranger. The Everest is delivered to sub-Saharan Africa as well as being sold locally but has limited export potential because it is also made in Thailand, China and India (where it is known as Endeavour). The Ranger has a global role, being exported to nearly 150 markets across Africa, the Middle East and Europe.

GM sells Struandale to IsuzuWhile the picture for the automotive industry in South Africa is largely positive, involving multiple investments, production increases and growing local content, not all vehicle manufacturing operations are progressing. As of this year, General Motors (GM) has decided to pull out of production in South Africa, in line with its withdrawal elsewhere in the world, including the sale of its European operations to PSA and the end of production in India. GM has sold its South African manufacturing operation in Struandale, near Port Elizabeth, to Isuzu, which will make KB series pick-ups and a range of medium- and heavy-duty trucks for the local market. GM South Africa produced just 34,000 vehicles in 2016, exporting only 2,000. Neither volume justified continued production in the country, and GM has decided to focus its efforts on the Americas and China instead.

Chinese OEM sets up first base

BAIC builds new plant at CoegaAlongside the expansion and modernisation of long-established facilities in South Africa, an all-new facility from a Chinese entrant is on the way – and this may not be the last. The new factory is being built by Mercedes’ partner, Beijing Automotive (BAIC), which will take a 65% stake in the upcoming factory at Coega, near Port Elizabeth. The remainder will be taken by the state investment company, the Industrial Development Corporation.

This project will see 11 billion rand invested, representing the biggest single automotive industry investment in South Africa, and will create 10,000 direct and indirect jobs. The plant will open in 2018 with capacity for 50,000 pickups and SUVs, though BAIC wants to double this by 2027. The first vehicles will be made from CKD kits, but in order to achieve the aim of exporting up to 60% of output – and to comply with World Trade Organisation rules – the factory will have to move quickly to full production.