Investing €500m to expand its operation at Leipzig means that, for the first time, Porsche can take three models on a single route through identical stations

Since production of the Macan began in 2014, Porsche Leipzig has operated as a fully-fledged production facility with a modern paintshop and a dedicated bodyshop. For the Panamera, however, bodies-in-white were manufactured and painted at the Volkswagen factory in Hanover before moving to the Saxony plant for pre- and final assembly.

Now, to accommodate complete production of the new generation Panamera, Porsche’s second home has expanded for a fourth time in its 16 year history, gaining a new 56,000 sq. m bodyshop. The €500 million project also took in assembly line adaptations and infrastructure upgrades with, in all, 600 additional jobs created. The sure and steady growth, however, hasn’t affected the company ethos or the production model. Leipzig works to the same Porsche principles as its sister plant in Zuffenhausen, near Stuttgart, which is home to the 911. The brand’s philosophy reaches back to the founder of the company himself, Ferry Porsche, and his belief in ‘always getting the most out of everything’.

Christoph Beerhalter, general manager at the Panamera bodyshop explains: “The distinctive features of production here are transparent processes [and] the consistent implementation of the principles of lean production.” 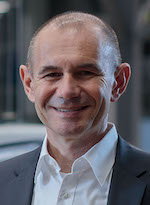 "Aluminium is a demanding material. Using the buffing pads and polishing techniques heat is generated and it might deform the material, it takes skill to avoid that." - Christoph Beerhalter, Porsche

Small stockholding for a just-in-sequence method controls delivery of pre-assembled and model-specific components in precise order of production and assembly time – in some cases directly to prescribed locations along the assembly line. Improvements are sought through constant reduction and elimination of waste, as well as continuous gains around processes while maintaining emphasis on the highest quality.

The first of the principles is flow – intelligent logistics and IT systems network all value-creating processes with one another. Porsche manufactures according to the ‘customer cycle’ – production volumes are the driver for all processes during the building of its cars. Employees in the assembly hall cyclically pull materials from logistics supply centres. Consequently, suppliers provide only the quantity of parts needed to meet the imminent demand, avoiding overproduction and unnecessary buffers. Finally, a zero-errors principle is an assurance of robust and stable processes and products free from glitches.

High vertical integrationThe body of the Panamera is based on the Volkswagen Group’s flexible modular standard kit (MSB). Leipzig’s new MSB bodyshop is overseen by a factory control system that assigns a body-in-white (BIW) to a vehicle order number right from the first component. The body is made up of 430 individual parts brought together by thermal and mechanical joining methods, plus applications of more than 200 metres of adhesive. On average, 13 bodies are produced per hour in the MSB bodyshop. In all, 475 robots and 189 employees are needed for the construction of the bodies with a vertical integration of over 90%.

Aluminium skinThe entire exterior skin of the new Panamera consists exclusively of aluminium. The vehicle body grows from the bottom up, in four major sections: underbody, superstructure, add-on parts and finishing. First, the platform of front body, floor and rear body are brought together to form the underbody line. Side panels and the roof are added to the underbody, then the construction process is divided into three major areas.

At the add-on parts line, the doors, boot lid, front wings and bonnet, which have been manufactured in parallel steps beforehand, are integrated into the body. Robots mount the doors and bonnet fully automatically as the tight gap dimensions and transitions between surfaces require automated work methods. Workers use a semi-automated process to assemble all the other add-on parts.

The fourth and final area is finishing, in which the body manufacturers check surfaces and perfect them if necessary, as well as fine-tune the add-on parts. It’s the section with the highest proportion of employees given the skilled hand and trained eye that’s required.

“Aluminium is a demanding material,” says Beerhalter. “It is quite difficult to finish parts as you have to be well trained in using the buffing pads and polishing techniques – heat is generated and it might deform the material as you put in heat. It takes skill to avoid that.”

The air conditioning not only keeps this busy and highly-populated line cool but draws air down to extract the aluminium dust the finishing techniques create. The operators and vehicles move on separate belts that incline, creating an optimum ergonomic working height to suit wing, bonnet, roof, etc.

“After that comes another quality check,” Beerhalter says. “Every body is inspected for our customer, which in this case is the paintshop.” 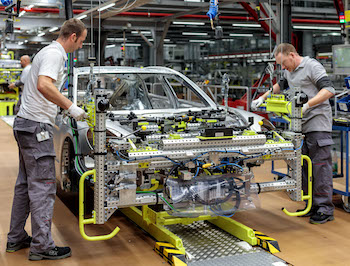 On average, 13 bodies are produced per hour in the MSB bodyshop

Power & performanceLeipzig’s solar power technology was first installed in the Macan bodyshop back in 2013. A photovoltaic system on the roof with a capacity of 880 kWp has been generating up to 800,000 kWh of electricity per year, equivalent to around the annual power consumption of 150 typical European households. Another photovoltaic system will supply the new Panamera bodyshop with a huge part of the electricity it requires, but will save four megawatt-hours of energy from conventional sources. Lighting throughout the new building is wholly based on LED technology.

Advanced network technology in the plant control system also helps to save energy. An adjoining co-generation unit is used for efficient heat and power generation. The new bodyshop processes and manufacturing systems have helped to reduce energy consumption. This is partly due to new energy-efficient joining technologies, for example by FDS bolts that need no pre-drilling.

Given the multi-material mix in the light bodies, riveting and clinching joining techniques help to significantly reduce the bodyshop’s energy consumption. All robotics and programming of the production facilities have been implemented to take account of energy efficiency.

“This applies in particular to the use of servo-pneumatics in the welding tongs,” explains Porsche’s director of production planning Thomas Riediger. “Selected components can now function without any compressed air, helping to consistenly reduce energy consumption.”

“There are more forward-looking changes in assembly,” Riediger says. Intelligent networking between the building, production facilities and the vehicles allows lighting control on demand in assembly as well. “Simply shutting down workplace lighting automatically during breaks can save 80MWh per year’, he adds. “Where possible, existing halogen spotlights have been replaced with LED lights with programmable control. Depending on the workload and vehicle type, lighting is provided only as needed so that energy can be saved sustainably.”

In addition, modern cooling technology in the robot welding guns reduces energy consumption in the Macan bodyshop by more than 365,000 kWh per year.

In the paintshop, a rock-flour filter system reduces energy consumption by 60% in comparison with a water-based system. At the end of process, Porsche continues to bolster its sustainable credentials as 70% of all vehicles from the Leipzig factory being transported from its onsite rail depot.

The big build up 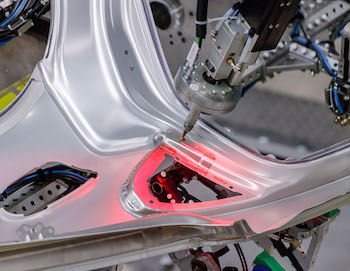 Among the joining methods, more than 200 metres of adhesive bead is used

The working day begins with the delivery of 17,000 pallets for assembly and 8,600 for the bodyshop across 550 heavy goods vehicles. The material from these pallets is picked, sequenced or sorted in the correct order for production in the bodyshop and assembly logistic supply centres. Bringing the Panamera alongside the Macan and Cayenne, Leipzig’s assembly line has of a total of 235 individual cycles. The cycle time is about two minutes. The bodies in assembly are transported on a plate line with lift tables or on pivoting hangers. The assembly area is subdivided into different lines, the Macan and Panamera move together but its not until the marriage with powertrain and chassis that the Cayenne merges with the line.

Door line: The doors are removed from the body at the beginning of interior line one and transported to the door line. They are then fitted with the electrical system and the window motors, the windows and the door trim (including speakers). Afterwards, the finished doors are transported to the new assembly line tray, where they are reconnected to their body.

Interior lines one and two: Here, the vehicles are fitted with all their interior parts, including the wire harness, one of the most important components. The cockpit is also integrated, one of the largest complete modules in the vehicle. The cockpit is assembled externally, and – if the vehicle order specifies this option – its upper area is upholstered in leather. The next stage sees the ignition key inserted into the car for the first time. The car leaves the lift table and is now suspended by a pivoting hanger so that underbody tasks can be performed, ergonomically.

Underbody line: Underbody lines one and two run in parallel to the door line in assembly. Components installed here include all brake lines, the pressure reservoir for the air suspension (if selected on the job order) and the fuel tank. On the way to the exterior line, the vehicle is now returned to the lift table as a mode of conveyance so that, once again, assembly tasks can be performed more ergonomically.

Exterior lines one and two: the windscreen and rear windscreen are fitted by robots. In addition, the vehicles are fitted with floor carpeting, the wiper system, the electrically swivelling tow bar unit, side airbags, the battery, and the Porsche badge is set on the bonnet.

Engine build-up: The engines and transmissions are fed via a side arm into the assembly process. The main work during engine build-up is in flanging the transmission and laying the cable line. This is followed by components such as the clutch disc in automatic transmissions, the starter, and the air conditioning compressor. Towards the end of engine pre-assembly, the lambda probes are connected. The entire vehicle underbody is finished and conveyed on large module carriers or driverless transport systems up to the marriage. In this phase, the bodies are still separate from the vehicle underbody. 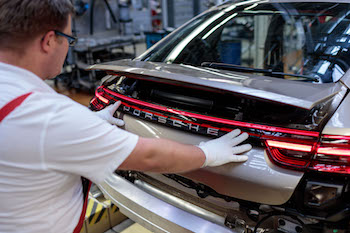 Chassis build-up: After engine build-up, the subsequent chassis build-up involves mounting parts such as the propshaft and drive shafts. The first cycles are used to preconfigure the suspension and axles on the large module carrier. In the next cycle, the front silencers are installed, then the propshaft is connected,and finally the drive shafts are integrated.

Mixed line: Marriage in Leipzig takes place on the mixed line. For the first time all three Porsche model series – the Macan, Cayenne and Panamera – take the same route through identical stations. The assembled bodies arrive at the marriage process from a decoupling module via an electric overhead conveyor and are lowered down to the assembly line from above. This is when the Cayenne enters the assembly line.

Marriage: The large module carrier moves under the structure, and then to the marriage. The superstructure and the underbody are then automatically joined by screw fastening. In addition, the suspension is screwed into the domes manually. Afterwards, the Porsche is passed back from the electrified monorail to the plate line.

Final assembly line: On the final assembly line, final tasks include finishing the wheel wells and filling the vehicle with fuel, brake fluid, coolant and windscreen cleaning fluid. Finally, the tyres are mounted to the wheel rims, and the Macan, Cayenne and Panamera can stand on their own four wheels for the first time.

Testing area and finishing: The final assembly cycles are used for start-up, testing and final inspection of the new vehicle. Driving functions such as braking are checked on a roller testing station. In addition, an employee starts the engine for the first time. Final adjustments are made to the chassis and headlights, and the driver assistance systems are calibrated. Then, on a short test track, the cars must demonstrate that all relevant components operate perfectly in action. Afterwards, the car exterior is washed and a sealing test is performed at the same time. Everything ready now for the final inspection.