Automotive manufacturing is known for its robotics, but Nissan’s ‘master craftsmen’ show that there is still a place for human skill. AMS went to see them at work on the GTR and Infiniti models made at Tochigi, Japan 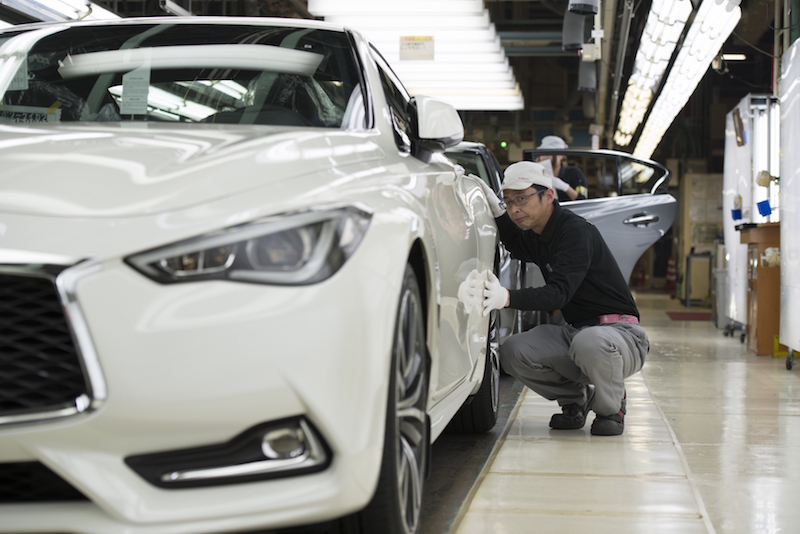 Most countries value luxury products, but few cherish the beauty of production quite like Japan, with its reverence for craftsmanship acquired over a lifetime of learning. This appreciation can be found in the automotive industry too, despite modern technology enabling many processes to be automated. Nissan, for instance, is willing to devote not merely years but decades to developing select personnel into what it calls takumi (master craftsmen). The products these exalted individuals build by hand are then treated almost as works of art, in the case of GT-R engines even being inscribed with the name of their individual maker, like the signature on a masterpiece.

GT-R engines are assembled at Yokohama in Kanagawa – one of Nissan's two domestic engine plants alongside Iwaki, Fukushima – but the vehicles are built in Tochigi with other sports and luxury models, an operation that AMS visited in early June. Located 100km north of Tokyo, Tochigi has more space than the OEM’s other two vehicle plants in Japan, Oppama (Kanagawa) and Kyushu (Fukuoka), sitting on 2,926,000 sq.m of land amid fields of rice. The manufacturing operation here started with casting in 1968 and progressed to axle production the following year, then a vehicle plant was opened in 1971 to make the Cedric and the Gloria. The built-up space now covers 830,000 sq.m and provides the annual capacity to produce 250,000 vehicles, process 168,000 tons of iron and 36,000 tons of aluminium and turn out 250,000 sets of axles.

The casting plant has exclusive responsibility within Nissan for making parts such as aluminium suspension members and supplies engine components to the OEM’s plants across the world. The axle facility produces all the axle modules required by Tochigi as well as supplying parts such as final drives and differential cases to both domestic and overseas plants. The vehicles made at Tochigi are also exported; in fact, less than 10% stay in Japan.

However, production at Tochigi is currently running lower than capacity, with around 100,000 cars made per year. Both lines operate at 30jph, though Line 1 has two shifts and Line 2 has a single shift. The models produced are the GT-R, Infiniti Q50 and Q60 and the 370Z; the Infiniti Q70, Q70L, QX70 and QX50. The 5,000-strong workforce includes around 200 takumi.

In Japan, Nissan produces vehicles at Tochigi, Kyushu and Oppama, and engines at Yokohama and Iwaki.

Updating production with the Q60While Tochigi started making the GT-R in 2007, Infiniti vehicles have been built at the plant since the brand was launched in 1989. Its expertise was strengthened last year for production of the new Q60 sports coupe, which began in August, with fresh investment injected into its stamping, painting and assembly facilities in order to tackle new materials on the Q60 as well as to improve quality control. In all sections of the plant, this new technology has been supported by the takumi, led by six meister takumi – personnel with the greatest experience and understanding.

Tochigi’s press shop has been upgraded with deep-body stamping technology, while the paintshop has received a new paint booth dedicated to the application of the new ‘Dynamic Sandstone Red’ finish. Nissan says that the booth allows workers to “more finely control paint thickness and quality”. Overall, the paint process is a mixture of manual and automated tasks, the latter mostly using Yaskawa robots.

In assembly, the improvements include the addition of new lighting and a camera and video system to boost quality control, plus new tooling for the resin bootlid on the Q60 – a combination of a resin skin on a steel frame which Nissan claimed as a ‘world first’. The lid is added to the body while it is still doorless, using a carbon-fibre jig to ensure correct placement. Previously twice as heavy when it was made of aluminium, the frame has been reduced to just 6kg and is positioned by hand on the rear of the body before the lid is manoeuvred into place using a lift assist; the workers then tighten the screws and remove the frame, storing it in a lineside rack. Although three other models are made on Line 1, this process is performed only for the Q60.

When Nissan introduced the next generation of this model at Tochigi in June, Roland Krueger, Infiniti’s chairman and global president, commented: “Our engineering and manufacturing team is ramping up production, and we are looking forward to shipping vehicles to customers around the world.” He also hailed the quality of the Q50 as “exceptional” – and that is thanks in no small part to the takumi, the master craftsmen of Japan’s automotive industry.

Describe the role of Tochigi Plant within Nissan’s wider production network.Tochigi Plant produces premium vehicles and our aim is to be number one for quality all over the world, so our competition is not only [within] the Alliance [with Renault] but also with Daimler, Volkswagen, Audi also; we are competitive with every European automobile maker. Our current state is not number one but that is our aim and now we are implementing some benchmarks to get there. Especially, we have meister takumi [master craftsmen] to improve the [production] skill. We have six and their skills are very strong.

What does it take to become one of the takumi?For a meister, it can take more than 20 years. It’s very difficult because takumi are selected operators. We have many tests; they have to pass exams and an interview, so that we can confirm their skill. The meisters train the takumi, the takumi train the operators. The training differs according to the process and we have many processes, not only paint and the trim and chassis, but casting, axle [assembly] and machining.

Is it important to have a combination of automated processes and the skill of human workers?Yes, that’s true. Especially for the finishing process for each vehicle we need the takumi. And also to set up the robots, to teach them all the techniques.

This plant was already making Infiniti vehicles before the Q60, so why did you need to modify the stamping, paint and assembly facilities? Is this model very different?No, but the rear fender is very difficult so we had many challenges to develop the Q60. In the paintshop, it is very difficult to spray; how to control the thickness of the paint is very important. So we invested in training to develop the Q60.

What are the benefits of the new inspection system in assembly?Especially to protect against scratches, we introduced a camera and we are monitoring the operation vehicle by vehicle. We analyse the operation with the camera, so it’s easy to find the root cause of why the operator made a scratch and we can take a counter measure. 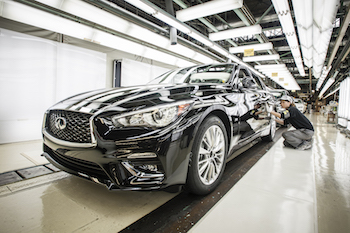 Where do you source the Q60 components?Mostly Japan, but some parts are from China and America. The M274 engines come from Decherd Plant [Tennessee] in the US. The control unit of the navigation system comes from Spain.

Do you think Nissan will introduce aluminium vehicles at Tochigi, given that this plant already has premium production?We have many opportunities to adapt to new materials, not only aluminium but carbon fibre also. So we are studying how to utilise these new materials for future vehicles.

If you introduced aluminium, that would surely require a big change in the press shop.Yes. Not only the press shop but also the bodyshop. In some areas it is very difficult to utilise spot welding; that means we would have to adapt to laser welding or riveting or glue. But in assembly also, trim and chassis would also need many changes.