While the OEM remains strong on home territory, its production is expanding significantly outside Europe 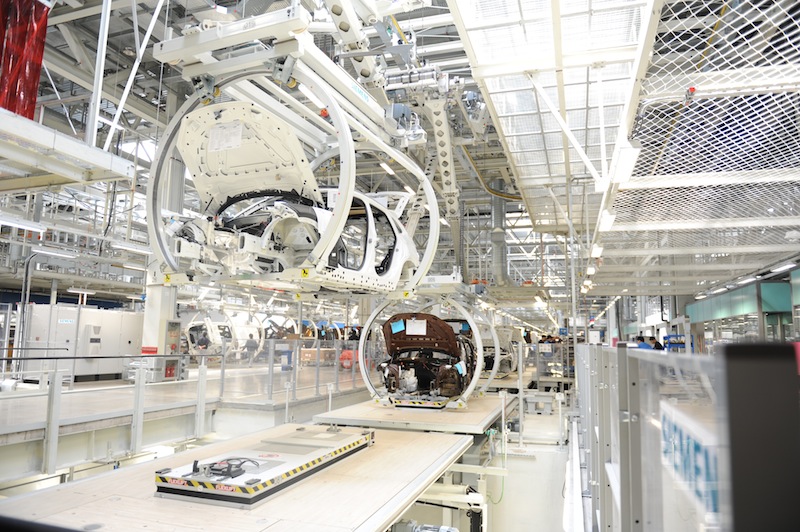 BMW may be a German company, and its core production facilities remain in its home nation, but it is by no means resting on its domestic or European laurels; in recent years, the OEM has established and grown a global manufacturing network far beyond Europe. Within the continent, its German vehicle manufacturing plants are complemented by engine production facilities in Austria, plus Mini and Rolls-Royce factories in the UK, together with an engine plant which supplies both BMW and Mini vehicles. However, it is beyond Europe that some of the company’s most significant and interesting investments have taken place.

BMW has been producing cars in South Africa since 1973, but this was a low-volume operation for many years and did not become a full manufacturing operation until the mid-1990s. In fact, BMW’s first production plant outside Europe opened in the US in 1994.

Since then, as well as transforming its South African facility and greatly expanding its US factory, the company has set up full manufacturing operations in China, and most recently Brazil, with a plant in Mexico on the way. There are also CKD operations in India, Thailand, Egypt, Indonesia and Malaysia. Meanwhile, in Russia the company has a manufacturing partnership with Avtotor. In total, including European operations in Germany, Austria and the UK, BMW has 30 production locations in 14 countries.

The company has emphasised recently that the expansion of its operations beyond Europe does not represent a policy of reducing production or capacity within the continent. It is worth noting that 2013 was the third year in succession when BMW made more than 1m cars in Germany. Moreover, with German production to September 2014 coming to just under 850,000 units, it seems certain that the 1m barrier will have been breached again when the full-year data for 2014 is released. Thus, production outside Germany is growing at the same time as output within the country remains strong and can be expected to continue in the same vein.

In fact, expansion beyond Germany is in direct response to growing demand outside Europe and the need to localise production near to customers. In the case of expansion in Brazil, China and Russia (the latter two in association with local partners), the establishment or expansion of full manufacturing operations is a reaction to import duties on CBU vehicles.

Meanwhile, the US factory – at Spartanburg, South Carolina – has become BMW’s global centre for midsize and large SUV production, with four models already in production there (the X3, X4, X5 and X6) and a fifth, the X7, due to launch in a couple of years’ time, following a recently announced expansion plan. Currently making around 1,100 vehicles a day, the factory’s cumulative production is well over 2.5m units.

The US: Spartanburg
BMW announced its US plant in 1992 and in 1994 the factory in South Carolina opened, making the 3-Series E36 model. This was a trial arrangement, and once BMW systems were fully established, the company added the X5 SUV and Z3 sports car. The successor to the Z3, the Z4, was only made at Spartanburg between 2006 and 2008 before it moved to Germany; X5 production has remained in the US and Spartanburg now also provides kits for X3/X5/X6 assembly around the world, at the locations noted below.

Spartanburg added the X3 in 2010 at its first model change, taking over production from Magna Steyr in Austria, having earlier added the coupe version of the X5, ie the X6, in 2008. Most recently, when the third generation X3 went into production, the plant also won the contract to produce the coupe version of this model as well, with the X4 starting production earlier in 2014. The assembly line at Spartanburg is highly automated; as well as fully automated welding, the new X3 line features the first case within BMW’s production network where the hang-on parts, ie the doors, hood and tailgate, are attached entirely automatically.

Production in 2013 was just over 297,090 units, of which 201,000 were exported, a figure which it is claimed makes BMW the largest non-US car exporter to non-NAFTA markets. The plant has around 170 North American suppliers, 40 located within South Carolina. Currently, the plant has an annual capacity of around 300,000 units per year, but in early 2014 – some 20 years after the first US-made BMWs rolled off the line – the company announced a further investment programme. 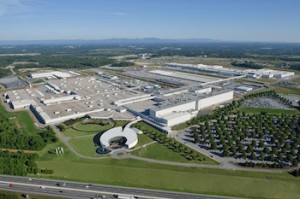 The OEM is now spending over $1 billion to take capacity to 450,000 units per year; as part of this, a fifth model, the X7, the company’s largest SUV, will also be produced at Spartanburg. Interestingly, although the US is the world’s largest SUV market, around two-thirds of the factory’s current output is actually exported to over 130 countries.

BMW has not only invested to make cars in the US but also has a major joint venture at Moses Lake, Washington, which produces carbon fibre for the i3 and i8 models that are assembled in Europe from parts made in Germany. This facility, SGL, is actually the largest carbon fibre plant in the world, with a capacity of 3,000 tonnes per annum. This output is insufficient for current and medium-term demand, however, and will be increased in two stages, firstly to 6,000 tonnes and then to 9,000 tonnes per year. The investment programme comes to over $200m, bringing BMW’s total investment in the US to more than $2 billion by 2019.

South Africa: Rosslyn
Between 1973 and the early 1990s, BMW’s plant at Rosslyn made 3-, 5- and 7-Series models in low volumes for the local market only. At this time, the factory was a kit operation, with a high degree of manual assembly. In the mid-1990s, as South Africa emerged from years of economic isolation, BMW decided to transform the plant into a full manufacturing operation and also encouraged a number of its core European suppliers – including Faurecia, TRW and ZF – to join it near Pretoria.

Full manufacturing operations began in 1997 with the E46 3-Series. Moreover, Rosslyn was allocated production of the sedan model not only for South Africa, but also for Japan, Australia, New Zealand and various Asian markets. Since then, the plant has started supplying vehicles to South America and more recently NAFTA.

The factory remains a one-model plant, still making only the sedan version of the 3-Series, although it has been tooled up to be flexible and is theoretically capable of making other versions as well. Since 2010, Rosslyn has also made the xDrive (all-wheel-drive) version of the 3-Series sedan for NAFTA markets. Exports of the current F30 3-Series head for eight key markets: Australia, New Zealand, Hong Kong, Singapore, Taiwan, Japan, the US and Canada.

Despite recent investment and its key role in supplying major markets, further expenditure at Rosslyn has been put on hold following long-running labour problems in the country. In October 2013, BMW said export sales had fallen by 75% because of labour disputes affecting the whole of the automotive industry in South Africa, meaning that future investment at Rosslyn had become extremely unlikely.

China: Shenyang
Like all other vehicle companies in China, BMW has had to establish a manufacturing operation there in association with a local company, in this case Brilliance Automotive.  The JV operates two factories in Shenyang, at Dadong, which produces the 5-Series long wheelbase model, and Tiexi, which produces the 3-Series sedan in standard and long wheelbase formats, the X1 and also cars under the local brand, ZINORO.

This operation also includes an engine factory which supplies both of the vehicle sites – the first BMW engine plant outside Europe. The engine factory makes a 2.0-litre, four-cylinder petrol engine. Production at Dadong began in 2003, while Tiexi launched in 2012.

Brazil: Araquari
The final, most recent, addition to the company’s global production network is the small plant at Araquari, Santa Catarina State in southern Brazil, which started production in September 2014. With an initial investment of €200m ($249m), this factory has started life with a capacity of just 30,000 units per year. It will produce a wide range of models for the local market, ie the 1-Series five-door, 3-Series sedan, X1 and X3 BMWs, plus the Mini Countryman. The groundbreaking ceremony for this plant was in December 2013, so to have started production within ten months can be counted as a remarkable success. 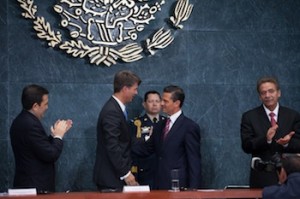 Mexico: San Luis Potosí
Reflecting strong and indeed rising demand for BMWs (and Mini) in North America, the OEM decided to open a second NAFTA plant, this time in Mexico. In July 2014, the company announced that a plant at San Luis Potosí would open in 2019, at a cost of more than $1 billion.

The company has announced neither the capacity nor the models to be made at San Luis Potosí. However, given the size of the investment – five times the initial investment in Brazil – a capacity of 100,000 units per annum is likely, and it might be higher. It is probable that the models to be made will be on the new UKL1 platform, and therefore include Minis and various versions of the new front-wheel-drive 1-Series.

Russia: Kaliningrad
BMW has hinted on several occasions in the recent past that a full manufacturing operation in Russia would launch at some point, but for now its production in the country centres on a joint venture with Avtotor in Kaliningrad. This plant was opened in 1999 – the first Russian assembly facility of any German car company.

Currently, the plant assembles the 3-Series, 5-Series and 7-Series (all in sedan format), plus the 5-Series long wheelbase, and the X3/X5/X6 SUVs. In April 2014, it was announced that Avtotor and BMW had signed an agreement to build a new facility in Kaliningrad, with construction starting in July; details of what will be made there, volumes, and a start date have not been announced, although in 2012 there were reports that the companies would build a 50,000-unit plant at a cost of $500m, with investment from Magna, JCI and Lear as part of the scheme.

The 2012 report suggested there was a 48% local content target that would be an important step along the road to achieving 60% by 2016, which is required under Decree 166 in order to avoid punitive import duties for vehicles made in Russia with low local content ratios.

Thailand: Rayong
BMW has been operating a facility in Rayong since 2000. The plant assembles a very wide range of models from imported parts, including: the 1-Series, 3-Series, 3-Series GT, 5-Series and 7-Series, plus three SUVs (the X1/X3/X5). It also assembles Mini Countryman and BMW motorcycles, making this the only plant in BMW’s global network producing BMW and Mini vehicles as well BMW motorcycles.

India: Chennai
The OEM started operations in 2007 at a facility near Chennai which is capable of making a very similar range to the Thai plant, as well as the 7-Series. Like Rayong, it also assembles the Mini Countryman – though not motorcycles. A second plant is apparently under construction, as the 14,000-unit capacity of the existing plant is not deemed enough to meet local demand in the medium term. 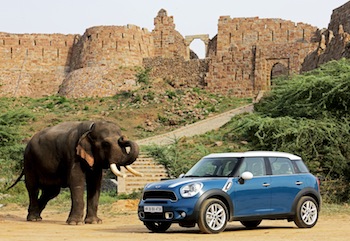 BMW has had partners in the country since 1997, but switched to its current partner, BAMC, in 2004, when a new facility opened in Cairo. The plant assembles the 3-Series, 5-Series, long wheelbase version of the 7-Series and the X1/X3.

Indonesia: Jakarta
The German manufacturer has a local partner, Gaya Motor, in Jakarta which assembles the 3- and 5-Series and the X1/X3.

Malaysia: Kulim
BMW has had an assembly partner in the country since 1979. Its current partner is Inokom Corp, with a plant at Kulim which assembles the following on two assembly lines: the Mini Countryman, 1-Series (three- and five-door versions), 3- and 5-Series sedans and the X1/X3.