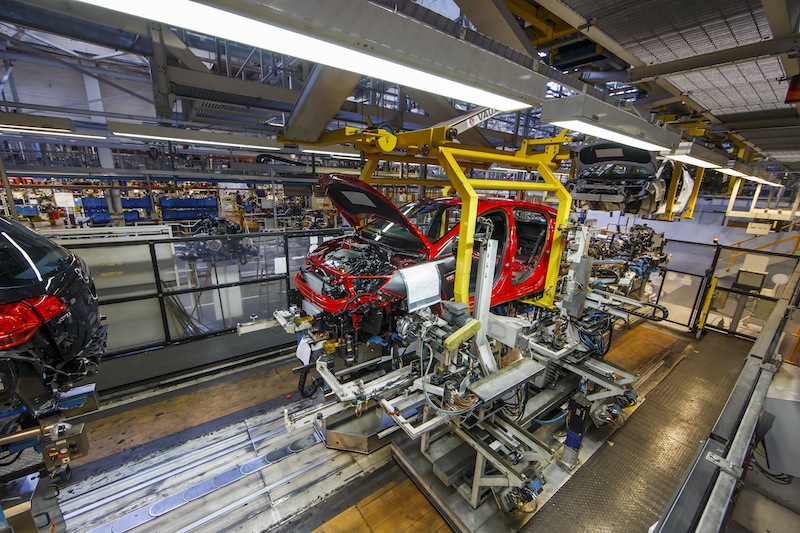 One of the oldest vehicle manufacturing plants in the UK, Vauxhall’s Ellesmere Port factory in north-west England is undergoing a renaissance. Having been threatened with closure in the recent past – but surviving when Opel decided to close the Bochum factory in Germany instead – it is the lead plant for the latest, sixth-generation Astra. This all-new model, made on GM’s latest Delta platform, is also produced in Gliwice in Poland; this platform additionally underpins the next-generation Chevrolet Cruze to be made in North America and Asia.

Ellesmere Port started building cars in June 1964, although component production had begun a year earlier. Astras have been made at the site since the Mark 1 model in 1981. Employment at the factory is now just under 2,000, less than a fifth of the number there at its peak in the late 1960s. The plant currently runs on a two-shift pattern, four days a week, with the employees having agreed to a long shift of nine-and-a-half hours a day, so that their 38-hour working week is compressed into four days and they have a three-day weekend. The current shift pattern runs from 7am to 4.30pm and from 9.30pm to 7am; maintenance is scheduled between the two production shifts.

This arrangement was put in place after a previous flexible labour agreement was signed in May 2012, coming into effect in early 2013. Officially for a four-year period, it is expected to continue for at least the lifecycle of the latest Astra and beyond, ie well into the next decade. Described as path-breaking at the time, it has since been used as the model for similar agreements with the workforces at other GM plants around Europe; the refusal of the German unions to agree to such a plan for Bochum was one of the key factors which ultimately led to its closure.

Ellesmere Port has added 700 personnel to make the new Astra

According to the management at Ellesmere Port, the workforce prefers the current arrangement, with its long weekends, and the plant claims very high levels of employee satisfaction as a workplace. Moreover, the closure of the factory for three days rather than two is understood to save Vauxhall around $2m a year in energy costs alone. Given that the UK manufacturing industry regularly bemoans the cost of energy, this is not something to be taken lightly.

Adapting to the new AstraThe current production ramp-up at Ellesmere Port is the direct consequence of the decision in May 2012 to award it production of the latest Astra. This has entailed an investment in the plant of £140m ($204.1m) for dies and equipment and the addition of 700 personnel at the factory, with up to 4,000 more jobs secured in the supply chain.

While the previous Astra had one of the lowest levels of UK content, sourcing for the new model has more than doubled this proportion, to around 30%. An impressive achievement it may be, but this success still leaves plenty of room for improvement; according to recent UK government figures, the average UK content for vehicles built in the country is now 41%, compared with 60% local content on average for vehicles made in Germany. With some of the new Jaguar models achieving UK content of around 55%, it is clearly possible to improve sourcing arrangements for UK-built vehicles.

The new Astra will result in around £1.4 billion being spent in the UK supply chain throughout its lifecycle, with the following suppliers benefitting especially from the increase in UK sourcing: AGC/Pilkington, Borgers, Covpress, Gestamp, JCI, IAC, Magna, NIFCO, Tenneco and TI. These companies will also reap the rewards of the higher production volumes expected for the new model compared with the outgoing vehicle.

At the time of AMS’ visit in September 2015 for the production launch of the new model, the assembly line was running at 31 jobs per hour, equivalent to around 110,000 units a year. However, this will be progressively ramped up over the coming months, first to 34 units an hour (120,000 per year) and later to 45 an hour. At this last rate, production would get very close to the minimum annual production rate of 160,000 units planned when the new Astra contract was announced. This could also be increased if demand required it and the factory switched to a more conventional five-day, three-shift system or added weekend shifts.

Production of the new Astra has begun with the five-door model, while output of the old estate (Sports Tourer) alongside the new hatchback will continue into the first half of 2016 when the latest Sports Tourer goes into production. The new model will be exported heavily, with current plans calling for an export ratio of 52% to 25 different Europeans markets. Exports further afield are anticipated but have not yet been confirmed; South Africa, Australia and New Zealand are probable export markets for the future.

Upgrading production technologiesThe plant investment has focused on improvements to the body assembly, paint and final lines. Some notable examples of upgrades to the manufacturing systems are the adoption of laser brazing for the roof and a new fabrication cell which has greatly accelerated the production of finished door assemblies. The laser brazing for the roof is a welding technique which has been widely used on premium models, especially by GM’s Cadillac division, but this is one of the first examples on a mid-market model at GM anywhere in the world.

Laser brazing, also known as adaptive welding – rather than the widely used resistance welding – results in a seamless join of the roof and upper body parts, and so the traditional gap and rubber infill commonly seen on the roofs of mid-market cars is absent on the new Astra. Getting this production technology to work has been a challenge, and in operation it involves the use of high-strength steel to make the body-length profile part which is welded to the roof. High-strength steel, supplied by Tata, is necessary for the component to retain its profile shape on a consistent basis.

Meanwhile, the new fabrication cell cost around £1.5m and produces welded doors in around half the space and twice as fast as the previous configuration. The doors, together with other metal assemblies, are stored in a building that used to make V6 engines for the Vectra, Calibra and Omega models which are no longer in production, with a small number also going to Australia for use on the Holden Commodore VS. As demand for large engines fell during the late 1990s and early 2000s, this engine became a marginal product and its manufacture stopped in 2004. The facility lay unused for a while until it was adapted for its current purpose. Other buildings have changed too as the work of the plant has evolved. 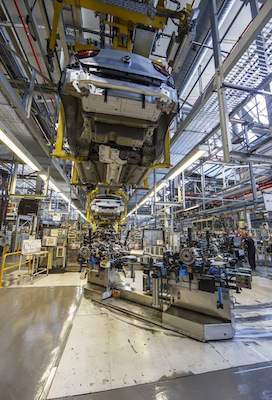 Parts are delivered to the assembly line by Voith

Within the final trim and assembly area, Vauxhall has installed equipment for the automatic installation of the front and rear windscreens; it has also increased the use of ergonomic handling equipment to make the job of installing the seats and the bulky dashboard assemblies easier for the workforce.

Supplier logistics are handled onsite by Voith, with seats from JCI one of the few types of parts delivered lineside directly from the supplier. The seats are handled entirely automatically from the delivery truck to lineside, using an automated unloading and conveyor system. Voith sequences parts as required but receives exhausts, headliners, radiators and carpets already sequenced, merely handling the in-plant movements.

In the late 2000s, and on a number of previous occasions too, when GM’s European prospects did not look too bright, Ellesmere Port was threatened with closure several times. However, hard work by the management, a modern, realistic approach by the unions and a positive outlook for vehicle production in the UK have combined to give this factory a future which is secure well into the next decade, and hopefully beyond; at least, as secure as any plant in this rapidly changing market.