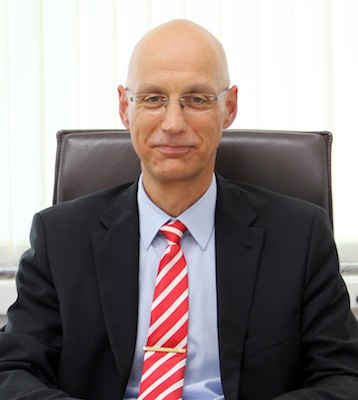 AMS: Which models are you currently producing here?
Andreas Lauenroth (AL): At present it’s [VW] Polo, Vento and [Skoda] Rapid. We were producing the Fabia but that was removed from the market last year.

AMS: What production operations do you carry out?
AL: We have a press shop, bodyshop, paintshop and assembly lines on site. The press shop is operated by a supplier, Gestamp. We are the type leader for the Vento; as such, we supply the parts for the vehicle to a Malaysian subsidiary company, which assembles this model on a CKD basis. Our production experience is also shared.

AMS: Why is the Vento being assembled in Malaysia; is it a capacity issue here at Chakan?
AL: No, we certainly have the production capacity here. The decision was taken to produce the car there as we [VW] want to increase our presence in that market. For us at Chakan this is important business, as at our peak output we are sending parts for 260 car assemblies per week to Malaysia.

AMS: What parts for that operation come from Chakan?
AL: They have a bodyshop there, so we send the panels for BIW [body-in-white], for example the side panel, because this requires a huge investment to set up for production.

AMS: What is the installed capacity at Chakan?
AL: We have a capacity for 150,000 cars per year, based on operating a three-shift system. Currently we are operating two shifts, which gives us a capacity of 130,000.

AMS: Since you have stopped producing the Fabia, do you have any plans to introduce new models?
AL: We see the Indian market growing over the next decade and this will require new products to be introduced and we are considering a number of possibilities. We are able to extend this plant; it’s designed to allow for additions to bodyshop, paintshop and assembly. Also, we have the land to build a second plant if needed. This all depends on the market and how much demand there is. In the first years of production, we have been establishing ourselves in the Indian market. Now we understand what the customers want and expect and as such are considering new product. Unfortunately I can’t reveal details at present.

• Andreas Lauenroth began his career with Volkswagen Group in 1980, as an apprentice toolmaker
• He has held positions in Planning, Logistics and Production departments
• Lauenroth undertook new projects at Volkswagen China

AMS: Are you considering vehicles for different segments than those you currently supply in India?
AL: No. We have been evaluating the market and what vehicles the customer wants. We see the 0-segment [A-segment] as the right one to focus on; there is a huge market for vehicles in this segment in India. At the Delhi Auto show this year we saw a lot of sub-four metre cars being presented. Other manufacturers are producing very high volumes of this type of car.

AMS: SUVs are a growing segment in India. Would VW consider building one here?
AL: We are considering a number of options for the future.

AMS: If you introduce new models, would there be enough capacity or would you need to add new lines, etc?
AL: This plant has been prepared for a one-line strategy. So one line in the bodyshop, paintshop and assembly. We are able to produce five different models on one line, but this is an established practice now. We are using the same platform [PQ25 global], but in the future we are considering MQB for India, as this would offer greater flexibility.

AMS: Which generation of engines is being used here?
AL: We are currently using the E111, E181 and E189 units, both petrol and diesel, with manual and automatic transmissions.

AMS: How much of your production equipment is sourced from Indian companies?
AL: Some parts of the equipment are supplied from the Indian subsidiary of a European company. For example, our paintshop is supplied by Dürr, a German company, but parts of the system are sourced from Asia. In the bodyshop, the conveyors are from South Korea and India, but equipment such as the robots and framers are from Germany. The framers specifically are supplied by an in-house tooling section at VW. So we can say approximately 50% of the equipment in this section is from Asia. In the assembly shop, the conveyor systems are also from South Korea. All the quality-related systems are from Germany. We have 114 robots installed in the plant and these are supplied by Kuka, except those in the paintshop that come from Fanuc.

AMS: What level of automation do you have?
AL: The bodyshop is 30% automated. It features 450 welding guns in a mixture of large and small units and there is a large number of workers switching between different welding guns for different applications. However, for ergonomic reasons we have introduced some robots into the weld stations. With the manpower costs in India, you have to manage the balance between manual and automated operations.

In the paintshop, it’s around 50-60% with the ED process and paint robots. Interior painting and underbody sealing are manual operations, however, we are introducing six new robots for the sealing tasks. One reason is to reduce costs; the robots can apply the sealant more efficiently and consistently, saving up to 4kg of sealant. The second reason is ergonomics, as this task can be physically harder as a manual operation.

AMS: Is there a general shift towards more automation?
AL: With the relatively low labour costs in India, you need a strong business case to justify the investment in automation, but at VW we have very high quality standards and these can be hard to achieve consistently with high levels of manual operations. So we are considering adding some more automation here. Without quality you can’t produce volume, and although we are making very high quality cars, improving quality is our biggest challenge here.

During AMS' tour of VW Chakan, the press and paintshops were off limits and there was limited access to the assembly area due to a quality audit taking place, but the bodyshop was fully open to inspection. To a visitor who has only seen fully automated bodyshops before, the large element of manual activity is noticeable; there are significant numbers of workers involved in welding and materials handling. Nonetheless, VW Chakan boasts a modern and impressive operation.

The single bodyshop line is divided into three sections: underbody, which involves both robotic and manual welding; framing; and closures. As noted by Andreas Lauenroth, executive director – technical, VW India, it is clear to see that the automation has been applied in particular areas where there was a need to improve productivity and quality. Perhaps the best example of this is the laser welding cell – a fully enclosed and automated operation for joining the roof panels to the body shell. This consistently delivers a very high quality join that requires little or no further finishing, something that would be virtually impossible to do manually.

As an important part of VW’s drive to raise quality standards at the Chakan plant, a Technical Academy has been established to identify and train the most promising future manufacturing engineers in India. This is a three-year programme, with an initial 16 students selected and enrolled. The aim is to produce engineers trained to a high standard who will contribute to the technical competence and quality of operation at Chakan.