A little goes a long way 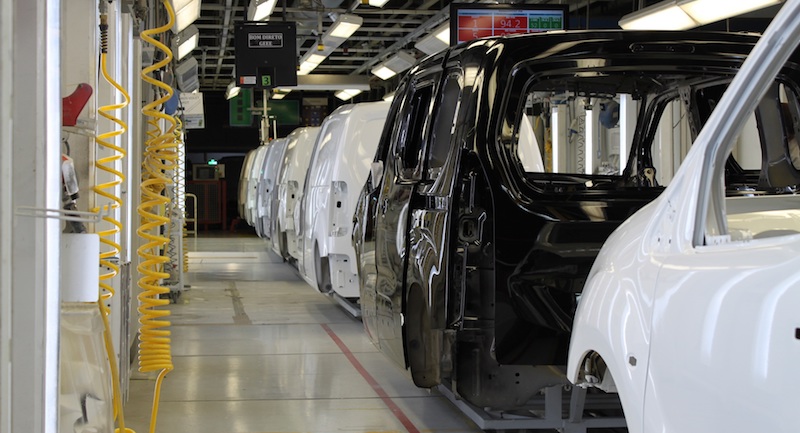 Earlier this year, Groupe PSA announced its plant in Mangualde, northern Portugal, would take on a third shift for its Peugeot Partner and Citroën Berlingo production lines. The move was prompted by strong market demand for light commercial vehicles (LCVs). Around 53,600 were made in Mangualde during 2017, a rise of 7.8% from the previous 12 months and a significant contribution to the 476,500 group total – all of which added up to a record-breaking year for PSA’s LCV production.

The original plan for Mangualde was to create the third shift at the end of 2018 but the changes have been brought forward and are already underway. “So, 2017 was the last full year of the current model, B9 – we launch the K9 this year. It wasn’t expected that B9’s last year would be its best year, beating our expectations,” explains José Maria Castro Covelo, plant manager at Mangualde.

Initially, PSA’s Vigo plant – some 280km north of Mangualde and over the border into Spain – was to operate the end-of-life production but it was subsequently decided to place that final output in Mangualde, so extra volumes arrived. The new version is currently in the pre-sale production period. According to Covelo, the first sales in France and Germany will take place in October, then it goes market by market through to January.

"PSA is producing vehicles nearer to our customers and building more smaller-scale plants. The model for each of those factories is often Mangualde" - José Maria Castro Covelo, PSA

Small-scale specialistsEnd-of-life runs were a specialty of Mangualde due to its compact scale and proximity to Vigo, the much larger sibling in the region with annual volumes in excess of 400,000 vehicles. The C4 Cactus line at Madrid makes up the third arm of Groupe PSA’s Iberian Industrial Division. Mangualde’s role in the group stretches back more than 50 years. It was the site of the last 2CV production in 1990. The association is marked by a specially-designed traffic roundabout at the perimeter of the plant. Likewise, an adjacent roundabout is dedicated to the Citroën DS, known to the locals as Boca de Sapo (frog mouth). A stunning, full-scale granite sculpture commemorates the model that Mangualde produced from 1966 to 1975.

Since the 1990s, however, LCVs have been the mainstay of the plant. The current models are underpinned by the EMP2 compact van platform and the growing volumes suggest a great success is being made of it. The switch to the new K9 model will see more self-sufficiency for the plant and further opportunity to play to its strengths. “For the current vehicle B9, we receive 50 modules more or less [from Vigo] but for K9 we are producing the rear doors for the first time,” Covelo says. Beside the existing spot welding and MIG welding techniques, for the new body Mangualde is introducing laser welding, an unusual move for the numbers involved.

“It’s a laser technology that has been adapted to our volumes,” Covelo explains. “Usually, for laser welding, you need a large, closed cabin. Such a cabin can cost €2-3m ($2.3m-$3.4m) but I am proud to say we are testing a solution that is not just innovative but which costs less than the usual solution.”

As “the most compact factory in the group” Mangualde is increasingly being seen as a useful incubator for techniques across the value chain and the welding initiative is just one example of which Covelo is proud.

“This is the DNA of Mangualde – we have made it, we made it at half the cost. An important characteristic of Mangualde is that it adapts,” he states.

The plant’s relationship with the broader company and the contribution it can boast has evolved significantly since the LCV era began. Covelo notes that, historically, it was quite difficult for Mangualde to refer to expertise elsewhere in group as appreciation of how to produce volumes of 12-15 cars an hour was not in abundance.

“Today the group has changed. Over the last four or five years, with the globalisation of PSA, we are producing vehicles nearer to our customers and we are building more and more smaller-scale factories. The model for each of those factories is often Mangualde,” Covelo proudly declares. “Mangualde has become a model for small volumes in the group and we get a lot of engagement from experts who come to learn, and also to improve our solutions.”

Collaboration and transformationThe evolution of the plant is set to continue thanks to a joint initiative with government and academia in Portugal aimed at stepping up the factory’s adoption of Industry 4.0. Known as Mangualde 2020, the programme will bring in applications on automatic storage on press lines, machine-vision quality control, cobots and a full kitting system distributed through AGVs.

Describing the approach, Covelo says: “When we started to construct the Mangualde 2020 programme last year, we first tried to identify the industrial architecture we have in the factory. With logistics at two levels, unfinished arrangements on full kitting, we saw our opening move was to improve that industrial architecture.

“Another point was the move to K9, a new modern platform and, in the near future, to be able to answer demands on hybrid, electric and whatever comes.”

Covelo sees Mangualde 2020’s aim as being the significant transformation of the plant and he remains optimistic for a characteristically rapid process, based again on the strengths the plant has long shown.

It is often said that a little goes a long way. Entering this period of major transformations in infrastructure and technology, and in a lively LCV sector, the Mangualde team are confident of demonstrating just how useful a proving ground the plant can be for Groupe PSA as a whole.