Yorii: From zero to hero 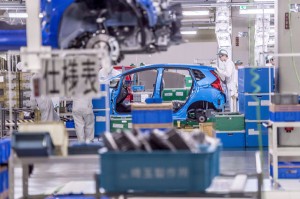 In July last year Honda’s newest factory, at Yorii in Japan, finally began producing cars, six years after the start of construction work at the site. Now Yorii is a template for efficiency, automation and environmental protection within Honda. And yet this is a plant that almost never was.

Within a year of work starting on the factory, the global financial crisis had decimated demand for new cars and Yorii was one of the projects that Honda shelved. It was only when demand started to recover in 2011, with downsizing the new buzz word, that Honda decided it needed a new small-car centre of excellence; Yorii would come to fill this role.

The new plant is part of the Saitama triangle of Honda factories which includes the 50-year-old Sayama plant (manufacturing the Accord, Odyssey, Freed, Stream and the CR-V for some markets) and the Ogawa engine facility that opened in 2009. Yorii occupies just over a third of the 950,000m2 Saitama site, and includes a corporate park for 40 of its 400 suppliers, which assemble on location to speed up delivery and minimise stock levels.

Yorii is currently devoted exclusively to the Fit, the B-segment hatchback which will be sold in Europe from 2015 as the third-generation Jazz. But a small saloon built on the same platform and a compact SUV that was unveiled at the Tokyo Motor Show as the Vezel (a name likely to be changed before sales begin in 2015) will also be made here.

Taking automation to a new level
Yorii is capable of building 250,000 cars a year with a workforce of just 2,200 people, split into two shifts. This extraordinary output-per-employee is down to the high level of automation throughout the plant, across stamping, welding, painting, plastics and final assembly.

Honda insists that automation is not merely a cost-cutting measure but has been introduced in areas where high levels of accuracy are needed or where heavy lifting is involved. However, by streamlining the production processes the company claims to have reduced general investment by 30% and exclusive investment by 50% compared with a conventional plant, and cut the number of robots needed by 38%. The total investment in the plant was 100 billion yen (£665m).

Yorii boasts a number of automated processes which are firsts for a Japanese car factory. These include roller hemming of the doors, bonnet and tailgate, a new baking process to reduce energy consumption in the paintshop and a dry system of removing paint mist from the atmosphere when painting the bumpers. There are also global firsts such as the fully automated instrument panel installation. [sam_ad id=17 codes='true']

This high level of automation supports the plant’s motto: “easy to make, easy to learn and fast to make”.

Heading for a ‘triple zero’ environment
Honda says that Yorii sets new environmental standards for automotive factories worldwide and is a key part of its goal of ‘triple zero’ (no CO2 emissions, no unnecessary energy usage and no waste).

Yorii derives much of the energy it needs from thin-film solar cells capable of generating 2.6MWh of electricity, mounted on the roof of the final assembly and inspection areas. This is the largest solar power generation system at any car factory in Japan. Honda calculates that it could supply more than 450 households, and eliminates 1,200 tonnes of CO2 that would enter the atmosphere if the power was generated from fossil fuels. Yorii also has an 8,730kW gas turbine generator running on city gas to help lower emissions. 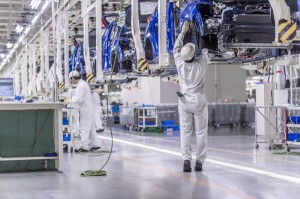 Production techniques to reduce energy consumption include reducing the painting process from the traditional four-coat/three-bake system to a three-coat/two-bake operation, which generates a saving of 40%. Paint mist when painting the bumpers is now absorbed by calcium carbonate instead of water.

There are also significant CO2 reductions stemming from the decision to locate major suppliers within the factory’s corporate park, with a direct link to the production lines.

Furthermore, the plant is surrounded by a 16,000m2 “bio-tape” into which Honda has introduced Tokyo salamanders, Japanese fireflies and other rare animals and plants. The bio-tape includes thickets, waterways, rice paddies and wetlands. There is also a 2km “bio-corridor” extending from Yorii to the Ogawa engine plant.

Stamping out the smallest inefficiencies
Honda claims to have improved the efficiency of the press shop by 40% compared with Sayama, through its high-speed servo stamping press and rapid, fully automated tooling changes.

The four 1,500-tonne Aida presses, located in one line, are capable of turning out 1,050 bodies a day in three shifts. Around 150 of the 1,100 staff on each shift are employed in the press shop.

The inner and outer panels of the doors, bonnet and tailgate are hemmed by a roller process. Instead of the usual upper and lower dies, Yorii has only a lower die and a robot which rolls around the edges to give a neater, more precise finish at 50% lower cost and with less energy consumption.

In the welding shop, panels are set and joined in one process rather than the usual two, and instead of robots entering the body from the sides, Yorii places them front and rear of the car. This reduces the number needed from 16 to 10, compared with Sayama. The inner frames are welded first, then the outer panels are added using a smart jig. This eliminates the need for reinforcements and reduces the body weight by 30kg.

There are just over 2,100 welds per car on the Fit/Jazz, excluding those on the doors, bonnet and tailgate. The number of MIG welds is 44% fewer than if the car had been built at Sayama, while spot welding has been reduced by 15%.

Paintshop & final assembly
The paintshop has been designed to reduce energy consumption, waste and cost while saving time. Yorii’s three-coat/two-bake process allows the booths to be 15% shorter than those at Sayama, requires 10% fewer robots and reduces energy consumption by 40% and coat loss by 75%. In the dry-booth plastics painting facility, the air is kept at a constant temperature and humidity, reducing its CO2 output by 42%. 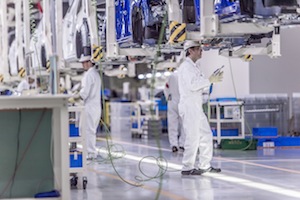 There are nine fully automated processes in the final assembly shop, which means that manpower has been cut by 40% to just 500 per shift, while the amount of floor space taken up by machinery has been reduced by 60%.

Surely the most fascinating process at Yorii is the automated wheel mounting. The four bolts for each wheel are first taken from dispensers, then lined up to be collected and transferred to where they can be picked up by the wheel mounters. Observing the process is like watching children playing with Lego.

Final assembly begins with the wiring being put into the car, then the interior is trimmed, the mechanical parts are added and the exterior is finished. The suspension is attached by 24 bolts torqued by 12 robots in one operation, rather than the three stages that would be needed if it was mounted manually. This saves space and cost and reduces the manpower needed by 40%.

The instrument panels are installed by the only four robots of their kind in the world, from Yaskawa Motoman. This takes up 60% less space than a manual operation. It also means there is no need for the protective fence typically found around final assembly lines.

Yorii, the plant that seems to have everything, also includes indoor inspection areas and a one-mile track where cars are tested before being sent by road to all parts of Japan.