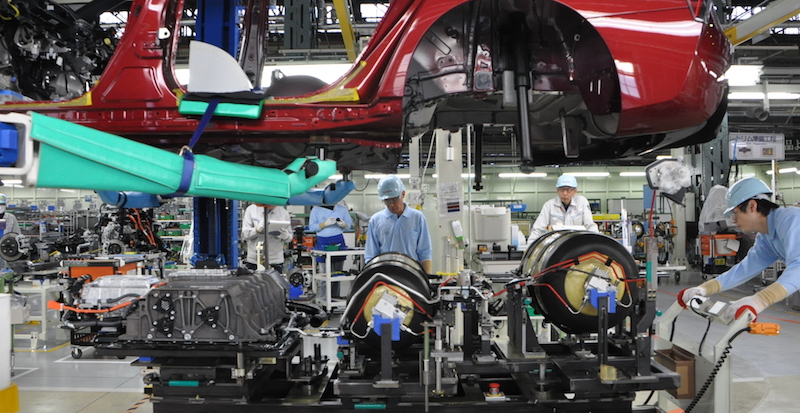 The domestic manufacturing networks of the major Japanese car companies have been stable in comparison to the extensive reorganisation, expansion and product re-allocations that have taken place at sites outside Japan.

Japanese factories also tend to be the first locations where new models have their production launches, ahead of their international manufacturing roll-out. Also, new production technologies are often evaluated in Japan first. In parallel, vehicle exports from Japan have declined somewhat in recent times as Japanese companies have increased capacity at their overseas plants – ‘build where you sell’ is an increasingly core maxim for Japanese carmaking operations.

Even so, despite this growth in international production, home-based factories remain central to Japanese OEM operations and this review examines the changing status and importance of the domestic operations of Toyota, Nissan (including Mitsubishi) and Honda, which together account for the majority of vehicle production in Japan.

The Japanese automotive industry has been at the centre of a major non-manufacturing issue in recent months, namely the allegations surrounding Carlos Ghosn, architect of the Renault-Nissan-Mitsubishi alliance and the man who has overseen the recovery of Nissan from a highly parlous financial situation a decade or more ago. While Ghosn’s case will proceed in accordance with the Japanese legal process, the implications for Nissan and its alliance with Renault are many and varied.

The legal process surrounding Ghosn could actually be the catalyst for a gradual unwinding of the alliance. Indeed, it now seems most unlikely that we will see many further allied developments between Renault and Nissan or Mitsubishi in the near term, certainly not while relations between the Japanese and French remain somewhat tense. In manufacturing terms, any changes would have greater impact outside Japan as Renault has limited involvement in the country; Nissan and Mitsubishi should be able to continue to cooperate or even fully merge without being affected by Renault, at least from a manufacturing or engineering perspective.

Such an outcome may suit both Japanese companies in the long run, creating a stronger national and regional player. However, the operations of both Renault and Nissan in Europe especially, and to a lesser degree in India, China and Brazil, are intertwined to varying degrees and unwinding them would certainly take time, and could potentially be very costly and disruptive to existing plants and operations.

Meanwhile, as the global media focus on the tribulations of Ghosn and what this means for the future of the alliance he did so much to create, Nissan has been able to report strong interim production and sales figures for 2018. In November, domestic passenger vehicle production rose nearly 30%, although it had fallen across the preceding 12 months, by 11.6%, from around 857,000 to 757,500.

Moreover, while Japanese production has risen, this appears to be mainly for the local market, as production for export appears to be on the wane; movements to North America in November fell by nearly 24% and those to Europe rose by nearly 91%, versus 27% and 56% falls for the previous 12 months respectively.

The improvement in Japanese volumes in large part reflects the company’s recovery from the sales losses caused by 2017’s problems with vehicle inspections in Nissan factories, which led to a fall in sales and some vehicles being taken off sale; Japanese consumers, it seems, stayed away from the brand only temporarily. In addition, the new Leaf electric and Serena e-Power (hybrid) models have been behind the recent sales boost, along with the new Note, which was launched in mid-2018.

The Leaf and Serena e-Power are the first models in a programme of electric and hybrid powertrain vehicles which Nissan expects to account for 40% of its sales in Japan by the of the 2022 fiscal year. Moreover, there will be eight new pure EVs for worldwide sale, including electric cars sold in China and an electric kei car in Japan. Europe is also expected to see electrified sales reach 40% of sales Nissan volumes by 2022, rising to 50% by 2025. By comparison, Nissan expects up to 30% electrified sales in the US by 2025, and up to 40% in China at the same time.

While Nissan – and other Japanese vehicle manufacturers – focus on expanding their overseas facilities, their domestic facilities have not been entirely ignored. For example, at Nissan’s Tochigi plant, the new Infiniti Q60 was accompanied by the introduction of a number of new manufacturing techniques, including unique deep-body stamping machines and new tooling for the trunk lid, which is made of a unique hybrid combination of a composite resin skin on top of a steel frame, a process which allows greater design freedom for the brand’s engineers. The Tochigi factory also has a paint booth dedicated to one colour, namely Dynamite Sandstone Red; this deep red finish requires a combination of automated and manual processes to achieve the finish and standard required.

Hybrid know-howNissan also holds a 34% controlling stake in Mitsubishi; a quirk of Japanese corporate law allows it to exercise full control over Mitsubishi with such a stake but without having to take 100% ownership and its full liabilities onto own balance sheet. It can, nonetheless, take full advantage of Mitsubishi’s undoubted greater knowledge in hybrid technologies. Although Nissan’s e-Power models, notably the Serena, were developed ahead of the Mitsubishi shareholding and technology access coming into effect, Nissan will certainly draw on the latter’s hybrid experience on future programmes; there is every likelihood that the future e-Power models will actually use Mitsubishi-derived hybrid technology.

Having been at a low point when Nissan took its controlling stake, Mitsubishi’s most recent figures highlight the scale of its turnaround. Japanese production in November 2018 was just over 63,000 vehicles, a 21.1% rise year-on-year; for the 11 months of 2018, the total of just over 619,000 was a 16.1% rise. Interestingly, overseas production, especially in Indonesia, rose by 17.3% in November and 25% during the first 11 months of 2018. Even stronger performances were recorded in domestic car registrations, which were up 26.3% in November and 31.4% for the first 11 months of the year.

At Toyota, there has been a mixed picture for vehicle production recent times. For example, in November 2018, its car production fell 2.3% year-on-year to just over 260,500; with Daihatsu production up 9% year-on-year at nearly 70,000 in November; the group’s total car production was barely changed at just over 330,000. Interestingly, however, Toyota’s own sales within Japan rose 2.6%, giving the brand a 48% share (excluding kei cars), down 2.4%, or 31% including mini vehicles, down 1.6%. Meanwhile Toyota’s exports fell by almost 5% while Daihatsu’s sales rose 7.1% in the month, with no exports.

With declining exports at Toyota and none at all at Daihatsu, the trend towards domestic plants suppling mainly, or in some cases only, the domestic market, is becoming increasingly clear. Toyota Japan reported decreased exports to North and South America and across Asia – and parallel production is on the rise in all of Toyota’s production locations outside Japan; in the case of Daihatsu the main rise in production outside Japan has taken place in Indonesia, which is rapidly becoming the company’s principal Asian production hub.Looking ahead, although the November 2018 figures show how the balance of Toyota production between domestic and overseas units is changing, 2019 is expected to see some redress; Toyota is actually forecasting a 7% rise in domestic production to around 3.37m and a 1% fall in production outside Japan to 5.72m.

One of the most interesting aspects of Toyota’s corporate strategy in recent years is its increasing focus on environmental matters. This was made especially clear when the company launched the Toyota Environmental Challenge 2050 strategy, which set out six core aims, including: zero CO2 emissions from new vehicles; zero CO2 life-cycle emissions; zero CO2 emissions from Toyota factories worldwide; minimising and optimising water usage; intensifying recycling systems; and helping to establish future society in harmony with nature. Some of these, notably the last, may sound lofty but they have instigated major changes in corporate culture and thinking.

Moreover, this has been brought to life, literally, at the carmaker’s Tsutsumi factory with the opening, in October 2018, of a new ‘biotope’. The term refers to places where deliberate action has been taken to allow nature to regenerate own its own. Tsutsumi was actually the first Toyota factory to implement the corporate environmental strategy, with solar power generation and a reforestation programme focused on creating a traditional Japanese satoyama forest with indigenous konara oak trees.

The company is also looking to extend the principles of the Toyota Production System to new areas of the business. For example, in December 2018 it announced a new, ‘Total-care Service’ package for the rapidly growing ride-hailing market in Asia. This will be launched through a telematics-based company, Grab Rentals. Grab also plans to apply the waste-elimination principles and philosophy of the TPS to its own business, focusing on time-efficient maintenance.

Turning to Honda, the company was able to finish 2018 by announcing monthly record production outside Japan as well as strong rises within the country itself. Domestic production rose 9.4% in November (the fifth consecutive month of rising production) to over 86,000, with the first 11 months of 2018 also showing a 9.3% rise to over 809,000. Reflecting rising production, domestic sales also rose in November by 3.8% for conventional cars, and 7.8% for kei cars, or 5.7% overall. Honda’s mini N-BOX was the best-selling vehicle in the kei sector.

Honda’s exports have also risen strongly due to model re-allocations; exports to North America have risen by over 200% in the first 11 months of 2018 reflecting movement of the Clarity fuel-cell vehicle and some Civic sedans, which have been allocated to Japanese plants to improve utilisation there and free up space in Honda’s US factories for SUVs.

Exports to Europe reflect the decision to source the HR-V small SUV from Japan rather than Mexico. By contrast, production outside Japan rose only modestly, by just 0.9% in November and 1.4% for the first 11 months of the year. While US sales rose by nearly 10% in November and over 3% in the first 11 months of the year, and volumes in China also grew, the overseas numbers were affected by a decline in Europe, mainly due to the end of CR-V production in the UK.

Away from vehicle production developments, the major recent technological development at Honda has been its partnering with GM and technology company Cruise in autonomous vehicles. In October 2018, Honda announced it was investing $750m in Cruise as part of a deal that, remarkably, values Cruise itself at $14.6 billion; it is also contributing $2 billion in coming years to product development and research in the partnership.

This investment follows on from Honda’s earlier decision, announced in June 2018, to co-develop new battery technology with GM, including cells for EVs. The focus will be on new batteries with a higher energy density and smaller packing requirements.

Effectively Honda will help fund GM’s development of batteries and Honda will source future battery needs from GM; this will allow GM to spread its battery development costs across a wider volume, guaranteeing additional markets, and saves Honda having to develop battery technology alone. These recent agreements further build on the two companies’ earlier commitments to develop fuel cell powertrains together by 2020.