When a gap should not be seen as a gap

Perceived quality is an expression now widely used in the measurement of deviations from tolerances for seemingly minor build details. Too great, and these variances can negate whatever excellence has been achieved in the vehicle’s underlying engineering.

The expression also sums up a part of the consumer’s first impression of a new vehicle, an impression which goes well beyond the immediate visual impact of shape, colour and internal fitting. Details such as the improper fit of the doors and other closures may be exaggerated by the effects of light and shadow, as well as by the hearing and touch of the potential buyer. 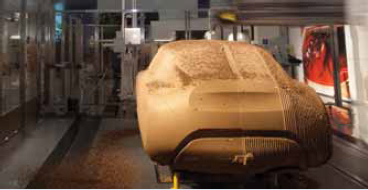 The term ‘perceived quality’ was created by John Maxfield, founder and technical director of Icona Solutions, based near Manchester in the UK, when he started his company over five years ago as a spin-out from the University of Leeds.

He launched a software product called Aesthetica that can be used to alert designers and engineers to the visual effects of deviations from engineering tolerances. The first sale was three years ago to Nissan in the UK, which used it in the development of the successful Qashqai.

Since then, the software has been integrated into the product development processes of manufacturers including Porsche, Bentley, Hyundai and GM Europe, the latter using it to help refine the lines of the Opel/Vauxhall Insignia which won last year’s European Car of the Year award. Today, the software is comparable in price to current highend CAD systems, says Maxfield , at around £30,000 for a license.

Don’t write off
clay just yet

While software can reduce cost and speed development, it will not replace the oldest visualisation technique in the automotive industry, the physical modelling of projected new vehicles in clay. So says Colin Hart, manager of the modelling group at Nissan Design Europe (NDE), based in central London. In fact clay modelling has been successfully automated and integrated into computer-based design processes, he says Hart. His unit has around 60 staff within the satellite of the central Nissan design operation in Japan. However, says Hart, NDE’s role is not simply to ‘Europeanise’ designs that originate in the Far East; it was primarily responsible for the design of the Qashquai. NDE operates three major design packages – the Alias program for concept visualisation, the more ‘engineering-based’ ICEM-Surf surface modelling package, and the I-DEAS 3D CAD modelling package sold by Siemens. Extensive use of clay modelling is by CNC machining rather than manual crafting, and the studio has a full 5-axis milling machine dedicated to the creation of full size models of vehicle exteriors. An additional 3-axis machine produces ‘hard’ models in resin board that can be used to check the form and fit of elements such as doors. The facility also has a number of fused deposition modelling (FDM) rapid prototyping machines. In practice, says Hart, vehicle design projects are likely to start with a mix of paper sketches, and then work on the Alias system to generate surfacing information in digital form. This CAD data will be sufficient to generate the information needed to make a clay model on the milling machine. But the physical model will then most probably be subject to some manual refinement before it is digitised to generate a further 3D representation. This which will be ‘reverse engineered’ by photogrammetric scanning into the ICEM-Surf system. Approval in Japan The essential point about the latter, Hart explains, is that it is able to represent information on tolerances in much greater detail, as well as in geometric form. Design information sent to Japan for review or approval, he adds, will be transmitted in the ICEMSurf format. Moreover Hart makes it clear that this iteration between the digital and clay worlds is not in any way irksome or inefficient. Clay, he says, “is still a very good medium” for representing design intent and introducing modifications to exterior details that can be evaluated for their likely visual impact and digitally recorded. Hart adds that NDE is quite prepared to revert to the older method in which the clay model is made before any digital data is recorded.

Maxfield had identified a seeming contradiction in the way that computerised design technologies had evolved. He believes that as computer aided design (CAD) systems progressed from simple 2D draughting to precise 3D modelling, designers correspondingly became used to their ‘design intent’ being represented with absolute fidelity. “CAD systems always show perfection,” says Maxfield. In the real world, the conversion of digital designs into physical products means that manufactured objects, not least cars, never quite comply exactly with their CAD data. Which is where Aesthetica comes in. It can provide precise representations of how products will actually appear given various tolerance conditions, and so allow judgements about the implications for perceived quality of particular designs, says Maxfield.

To put it bluntly, he adds, the purpose of the software is to “introduce imperfections” into the design process. The start point is loading the software with information including CAD models, relevant tolerances and the physical properties of each of the materials involved, such as the Young’s modulus and tensile strength. In addition, information is needed on ‘constraints’, such as the locations of welds or hinges. The software will then calculate the deformations produced by various tolerance conditions and, just as importantly, provide a photo-realistic display of the consequent visual effects in various lighting conditions. As such the software is a sort of hybrid – part photorealistic graphic package, and part engineering analysis system. By putting these two capabilities together it forms a tool that provides a means of integrating external styling with precision engineering in order to make the actual appearance of vehicles conform more closely to the CAD ‘ideal’. The objective, of course, is to make the vehicle feel better to the consumer.

The outputs from the software can be made available in various ways, says Maxfield. They can, for instance, be displayed for large scale simultaneous viewing on a power wall, or by stereoscopic viewing. Or, more conventionally, on a single desktop screen. In all cases, obviously, it is up to the people involved to make subjective evaluations based on what they see, though Maxfield says that it is also possible to program the software to flag up particular degrees of deformation.

But Maxfield also stresses that it is not simply a one-off tool for use during the development of completely new vehicles. Given that most vehicles incorporate elements from previous models or predecessors in the same range, then a good deal of hard information about the variations in tolerances produced by manufacturing will already be known. So it is possible, he says, to make design choices that are compatible with current manufacturing capabilities. He also notes that the use of the software leads to the integration of design with business decision-making. As such its use promotes a co-operative way of working in the development of a new vehicle which otherwise, he says, too often still relies on the sequential ‘over-the-wall’ process.

Car of the Year
GM Europe deployed the software at its International Technical Development Centre in Rüsselsheim, Germany, where the dimensional management department is responsible for the tolerances in vehicle development projects. The required degree of dimensional quality is defined at the start of a project, in a tracking schedule known as the dimensional technical specification (DTS). This specifies all gaps and offsets visible to the customer, along with their nominal values and allowable deviations. When the department was first set up it faced the problem that many tolerance-related issues could not be resolved until a physical model was made. This often delayed decision-making and increased the costs of design changes. An investigation of whether 3D visualisation software could help with the Insignia programme led GM to the Aesthetica system. This coincided with early stage developments of the Insignia which were intended to provide superior performance in areas like vehicle dynamics, safety and comfort, as well as in aerodynamics and appearance. 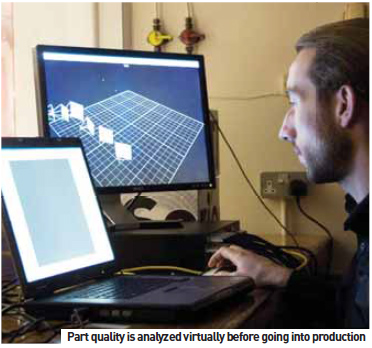 After the introduction of Aesthetica, design reviews were routinely carried out in a virtual reality room, in order to show the developing 3D model without the need for anything physical. Use of the software began at the concept stage, and the first Aesthetica models for the interior and exterior were generated on the release of the first styling data. From this point the process continued throughout the design and validation phase, and on up to final confirmation and improvement.

For the interior, for example, the primary focus was on the area easily visible to the driver and passenger, which allowed less visible areas to be used to compensate for build tolerances. But in the later design and validation phase, attention was always on the calculated gap and flush dimensions. These calculations were based on the assembly processes, component geometry, and component and assembly tolerances.

As the review process advanced, further attention was applied to visible structural items such as screws, rivets or ribs within the gap, clip connections of components within the visible area, sub-materials such as sealing foam or glue, and elements that could be seen through transparent components such as headlamps.

The consequence was a greatly improved overall visual appearance, ie higher perceived quality, which was a major contributory factor towards winning Car of the Year status.