The OEM has introduced four vehicle platforms to maximise global production efficiency, but not without difficulty. AMS looks at the steps taken so far, the benefits still to come, and asks if the strategy will work 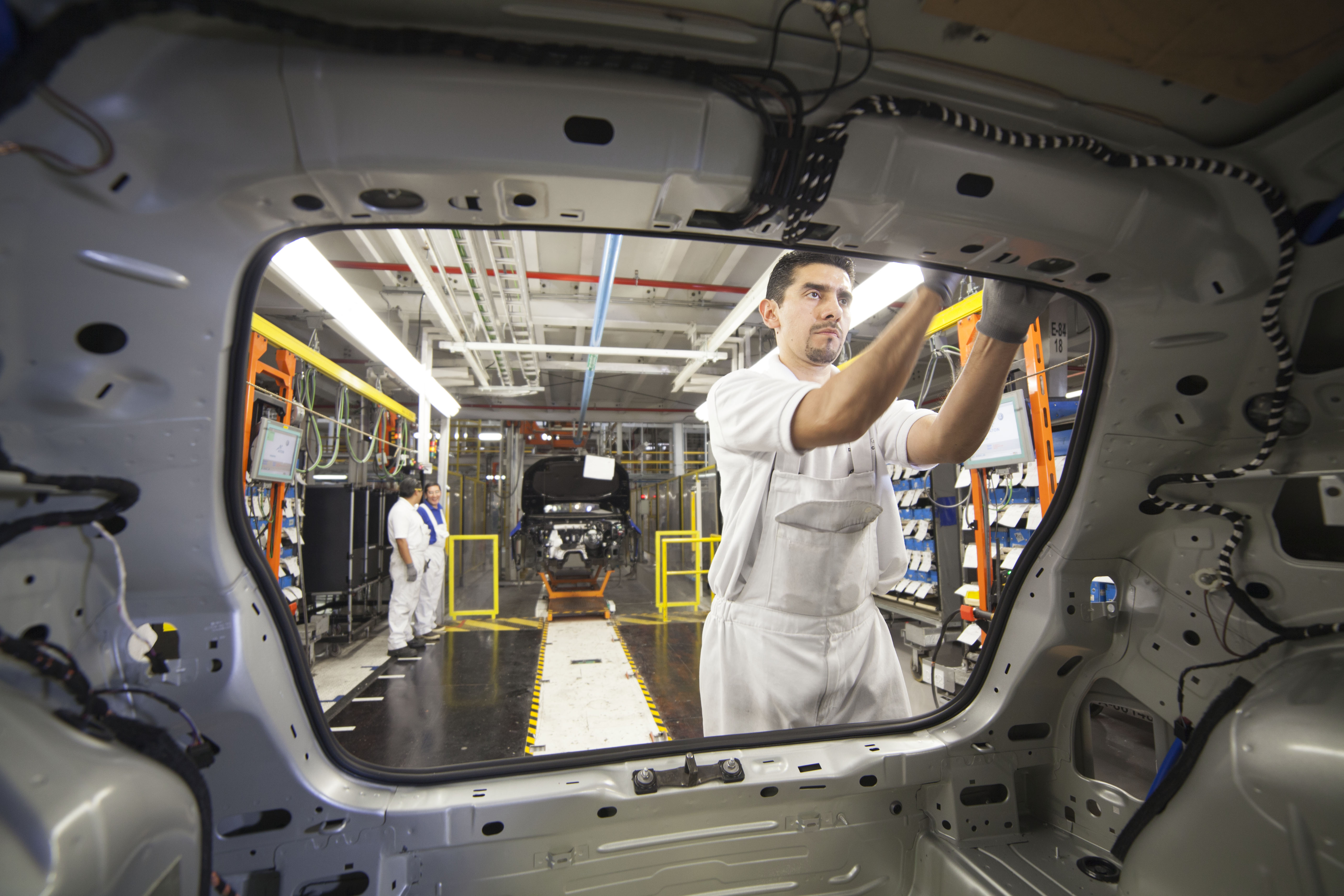 In February 2012, Volkswagen announced the latest incarnation of its platform strategy, encompassing four modular structures which have been designed to form the basis of all passenger cars produced by the Group’s multiple brands, from Seat and Skoda through to Porsche and indeed Bentley and Lamborghini. The four new platforms are:

VW itself is responsible for the NSF and MQB platforms, Audi for MLB and Porsche for MSB. However, given that VW, Audi, Porsche, Bentley and Lamborghini will also use the basic underpinnings of the MSB, it remains to be seen how much commonality there really will be in models made on this platform.

Commonality of components has always been at the heart of OEMs’ platform strategies, but modern thinking in this area is rather more sophisticated; the aim now is to build a dazzling variety of vehicle shapes and sizes around not just common components but also standard fixing points and manufacturing systems. Theoretically, this should allow companies to be more flexible in terms of which vehicles they build in different plants around the world; VW would ideally like to be able to make almost any vehicle based on the MQB in any of its plants equipped for this platform. In practice, this is not an easy task, as supply chains for the unique parts for each model cannot necessarily be established economically in each country.

Finding something in common
Each of VW’s platforms will produce vehicles using the following core components: seat frames; heating, ventilation and air conditioning modules; engine-transmission combinations; electronic modules; and electrical architectures. In particular, the engine-transmission combinations will have common fixing positions on the vehicle body and they will be linked to standard load-bearing structural parts, namely the front and rear chassis rails, the front bulk-head and side sills. Beyond this, the wheelbase and vehicle width can be varied, while individual models will continue to be individualised, as now, with different bodies, or ‘hats’ as many in the industry call them.

Hubertus Lemke, VW's head of technical project management, introducing MQB for the new Golf and Golf GTI in August 2014
Achieving this commonality is something which all car companies have long been striving for; the difference now is that, firstly, the platforms are much more modular than earlier versions, the key to which has been standardising the fixing points for the main components and, secondly, that – at VW especially – major factories all around the world are being equipped to make the vehicles on these new platforms at the same time.

Historically, plants in South Africa, South America and indeed China produced vehicles which were one or even two generations behind Europe, but this is no longer possible because consumers in emerging markets are as demanding and sophisticated as their counterparts in Europe, while some plants in these regions also produce vehicles for export back to Europe.

For the moment, it is only MQB, the core platform, which has been rolled out globally – at plants in Mexico, the US, Brazil, South Africa and China. The MLB platform will see a limited global roll-out beyond Germany; Audi’s new factory in Mexico is due to make the next Q5, while the future A4 and A6 in China will also be made off this platform. The MSB and NSF platforms will remain European for the foreseeable future.

Which platforms, which models

MQB
Now: the latest Audi A3, VW Golf 7, VW Passat, recently joined by the Tiguan SUV
In future:
VW Polo, Jetta, Beetle, Touran and Sharan
Audi A1, Q1, Q3 and TT
All Seats and Skodas (except the Mii and Citigo respectively).

MLB
Now: Audi models only (the A4, A5, A6, A7 and Q5)
In future:
The upcoming Q6 e-tron (some components but not the drivetrain)
The forthcoming small Q2 crossover (a shortened version of the platform because of its longitudinal engine positioning)
The next VW Phaeton.

MSB
Now: the new Bentley Bentayga SUV
In future:
Ultimately all Porsches
Large SUVs from Audi and VW (the Touareg, Q7 and future Q8)
The next Continental.

NSF
Now: VW Up! plus the Seat and Skoda equivalents
In future: no concrete plans for expansion, although it could be used for a new entry-level brand should one be introduced.

Investing in global production
MQB capability has been installed across the world, not just in European plants. The newest MQB model is the Tiguan SUV which was launched at the recent Frankfurt Motor Show. In Germany, it will be made at Wolfsburg, with some production expected at the Hanover van plant owing to capacity constraints at the former. A long-wheelbase, three-row version will also be made at Puebla in Mexico, where $1 billion is being invested for a market launch in 2017. The Puebla plant has already received MQB-specific investment for the Golf 7, but for the Tiguan, the bodyshop will see a significant increase in automation and local sourcing of components will also rise, adding around $1 billion to VW’s annual purchasing spend in Mexico.

Like all major technology changes, the adoption of MQB and the other platforms has presented a number of challenges, in both a practical and a financial sense. In 2014, reports emerged of difficulties with MQB at various VW plants around the world, and with the programme estimated by US bank Morgan Stanley to have cost the OEM nearly $70 billon already, the pressure to achieve a worthwhile return was clearly pressing. In mid-2014, production chief Michael Macht left VW when these problems emerged, and since then the company has been remarkably quiet on the financial success or otherwise of the MQB platform. Morgan Stanley has estimated that the successful adoption of MQB could save VW as much as $19 billion a year by 2019, with a gross margin of 10%. When the MQB concept was launched, talk was of 20% savings on component costs and a 20% reduction in the time required to launch a car. In 2014, there were suggestions that cost overruns at Wolfsburg especially were causing a great deal of concern at board level and indeed within the financial community.

The early signs are that MQB has not made a substantial difference to group financial performance. In 2013, the passenger-car division achieved a 6.4% return on sales, rising to 6.8% in 2014, but the company’s guidance to the markets for 2015 is that this figure will be in the range of 6-7%, suggesting either minimal growth or even a decline. It is likely to be some time before the financial success of MQB is proven; having invested so much, the company has little choice but to continue down this path.

MQB across the world

Europe
In addition to the main Wolfsburg plant in Germany, where the Golf and Tiguan have been introduced, with more models to follow, the Emden and Ingolstadt factories have invested to make the VW Passat and Audi A3 respectively. In Spain, at Seat Martorell, €800m ($915.5m) has been invested to make the new Leon.

North America
In Mexico, VW’s Puebla plant is in the midst of a major expansion which accounts for much of the Group’s $7 billion programme in the country, encompassing the Golf 7, the new seven-seat, three-row Tiguan and a range of new engines, as well as the new Audi Q5 factory. The Mexican-made Beetle will also switch to MQB from 2018, probably six months after the Jetta sedan.

In the US, the VW plant at Chattanooga currently makes a version of the Passat on an old platform, but will add MQB technology with an SUV in 2017. This model will be the largest to be made off the MQB platform and will have similar proportions and dimensions to the Audi Q7.

South America
In Brazil, VW has invested €170m to expand the Curitiba plant, Paraná, which makes the Golf 7 using MQB. This is on top of an existing €3.4 billion investment programme in Brazil which started in 2013 and will increase the plant’s daily capacity by 20%, although some Golfs will continue to be imported from Germany. The Audi A3 is also made at Curitiba. 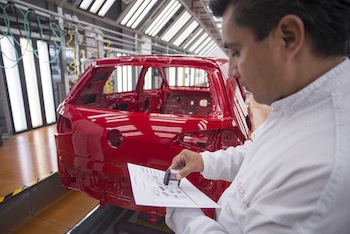 VW Pubela is one of many plants prepared for MQB production
China
MQB systems have been installed in three new factories, at Foshan in the south, Ningbo in the south-east and Changsha in the centre. Foshan, VW’s 104th production site worldwide and the first in China to use MQB, will build a mix of Audi and VW models, having started with the Golf and A3, originally with an annual capacity of 300,000 units; this is expected to double in the near term. The company’s 105th site, Ningbo, has an annual capacity of 300,000 vehicles and the first model made there was the Skoda Superb. The newest China plant, Changsha, launched MQB production this year, making the Lavida (a sedan slightly smaller than the Passat).

There are actually six Chinese plants deploying MQB, the others being at Changchun in the north, and Nanjing and Shanghai in the east. Further MQB capacity at Tianjin and Qingdao is also planned. By 2018, the VW Group will have annual capacity of around 4m units in total, half based on MQB.

A posher platform for Porsche
At the upper end of the Group’s line-up, Porsche, Bentley and Lamborghini will all use the MSB platform developed by Porsche. This is sufficiently flexible to allow rear- or all-wheel-drive, along with front-, mid- or rear-engine positioning. The three variants should produce a range of vehicles, such as:

One of the key features of the MSB platform is that it offers major advances in weight over existing platforms, weighing around 90kg less than the current Panamera platform, as a result of using a combination of high-strength steels and aluminium. Exactly which Audi models will actually use this platform remains to be seen; there have been reports of VW strategists wanting Audi to use it for the next A8 and the rumoured A9 flagship sports car, but also of Audi engineers declining to do so, much to the annoyance of the financial managers at headquarters. Audi’s engineers are understood to be much keener on developing all their future models on the MLB platform which they are leading, and are more than happy for Porsche to use this for the Cayenne and for Lamborghini to use it for its own future SUV.

In summary, four platforms will underpin all future VW Group models, although by far the most important will be the MQB, covering over 80% of VW models, almost all of the Seat and Skoda ranges, as well as some of the smaller Audis. A significant sum has been invested worldwide, in Europe, China, South Africa, Brazil, Mexico and the US, and the success of the models coming out of these plants is essential for the platform strategy to prove its value. Given the sums invested, however, the downturn in China could not have come at a worse time for VW; it will be interesting to watch the number of Golfs, A3s, Lavidas and others which are made in China over the next year or so.