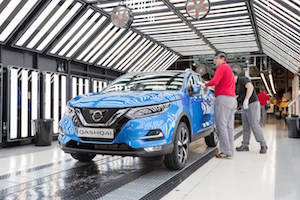 In early May, UK prime minister Theresa May called a snap general election in the belief that she could both pummel the opposition Labour Party and gain a stronger hand in the upcoming Brexit negotiations with the EU. In the end, neither objective was achieved, the country now has a hung parliament and another election may well take place in a few months’ time. While the country’s politicians try to find a way of both governing the nation and negotiating with the EU, how will the economy in general and the automotive industry in particular react and adapt?

Inflation is rising, wages are mostly static, consumer spending is likely to fall, recent terrorist attacks may well affect the tourist industry and UK nationals heading overseas will find they get fewer euros for every pound in their pockets. The automotive industry continues to operate largely unchanged so far, but some car companies have to take decisions on new models and their manufacturing locations amidst this uncertainty. Such decisions will have a direct impact on jobs and investment, and in the current, febrile political environment the government will be especially fearful of investment heading outside the UK.

Last year, Nissan said it would build the next Qashqai and X-Trail in the UK, while this year Toyota has committed to building models based on its new TNGA platform in the UK from 2018 or 2019. However, planning for these investments was well-advanced before the Brexit vote and for practical reasons as much as anything it would have been difficult for these OEMs to do anything different at the time. The pressing issue now is what will happen during the next round of investment decisions covering the replacement for the Astra and future Mini models, including the anticipated electric Mini. The acquisition of Vauxhall/Opel by PSA adds another dimension to the complexity.

A decision on production arrangements for the next Astra is expected during 2019, with production starting in around 2021, but this could well change to fit in with PSA’s model cycle plans. Similarly, with the Mini range made on a common platform with the current BMW X1, 2-Series GT/AT and future 1-Series models, BMW will likely look at sharing Mini production with BMW models. As a sign of how things might develop, BMW’s X1 will shortly be made on the same line as Mini models in the Netherlands.

As the government embarks on its Brexit negotiations, the future trading and customs relationship between the UK and the EU will play a significant role in such decisions. A 'hard' Brexit, with the UK leaving the customs union and facing tariffs on exports to the EU, will inevitably call into question the attractiveness of the UK as a manufacturing location from which to export to the bloc. The situation for the Astra and Mini is especially challenging because they have UK content levels of less than one-third, meaning that these programmes are more vulnerable to rising costs, whether caused by a falling exchange rate, new tariffs or both.

Stringent customs checks on the border would, moreover, add further costs and delays to both component imports and vehicle exports. This possibility deepens the uncertainty over the trading environment in which the industry will be operating after April 2019, and the longer this doubt continues, the more difficult it will be for manufacturers to justify decisions in favour of the UK. It is increasingly difficult to see why a long-term production planner at BMW or PSA, as just two examples, would recommend the country as a production location.