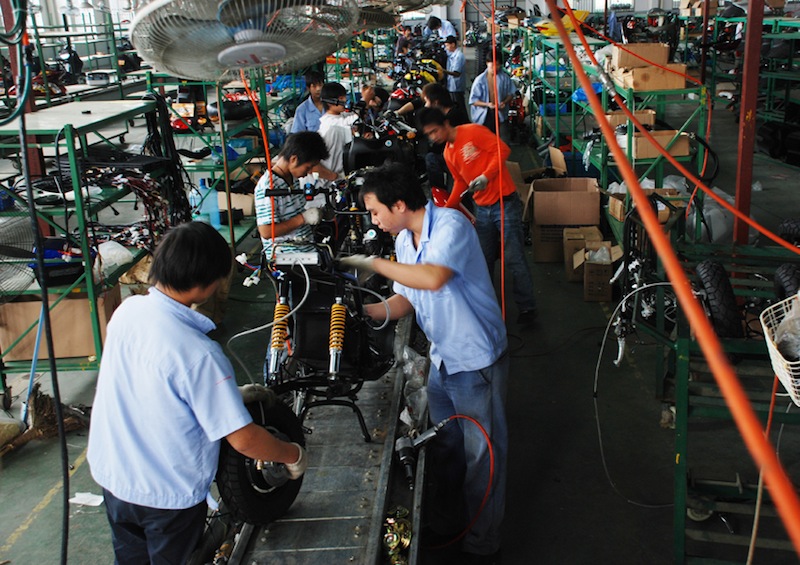 The once-mighty Chinese motorcycle industry is close to losing its title of the world’s biggest, as restrictions on sales bite at home and it fails to create memorable brands with which to expand abroad. The industry is still huge, though, with 18.9m motorcycles made in the country in 2014. But India is fast catching up, and in the financial year to the end of March, China’s neighbour built 18.5m motorcycles. While India is on a roll, China is not; its national automotive manufacturers’ association pointed out that the 8% fall in 2014 represented the third consecutive year of decline, meaning that production had reached its lowest figure since 2007.

This is perhaps understandable, since most major Chinese cities have now banned internal combustion engine motorbikes for a number of reasons, ranging from reducing accidents and cutting pollution to stopping purse-snatching. Their far slower replacements, the ubiquitous electric e-bikes, are arguably as dangerous due to their silence, but their ascendency looks to be unchallenged in the near future, despite threats of bans in some cities.

However, the problems of the local powered-bike industry extend beyond the ban and they could prove its undoing in the long run. Unlike the Indian bike industry, which exported 2.5m units in the 2014/15 financial year, China exports nearly half its motorcycle output – 8.3m last year. The appeal of Chinese bikes abroad is their value, but that is under threat from the shrinking industry. “The supply chain to the export industry is not as big as it was, and if it’s not as big, it’s not as cheap,” says David McMullan, a locally based consultant specialising in motorbikes. “If China loses its value, they’ve not got much going for them.”

Multiple manufacturers crowd the market
The sheer number of manufacturers in China is dizzying. CAAM lists 95 makers, but the actual number is likely to be closer to 200. They range from huge operations with an installed factory capacity of over a million to tiny businesses operating from sheds constructing bikes entirely from bought-in parts. CAAM noted that the number of loss-making businesses grew in 2014, without naming names, and McMullan says that consolidation in the industry is long overdue. “It looked like it was going to head that way when Loncin took over a fellow giant, Kinlon, in 2007, but it just hasn’t happened,” McMullan states. “A drop in numbers might force the small guys out and then you can start to consolidate. Some sort of natural selection has got to take place.”

The vast numbers of manufacturers in China is in sharp contrast with India, where the two big local makers, Hero and Bajaj, successfully battle Honda, and in doing so create memorable brands that help them establish to export markets. China has so far paid little attention to branding, and that is preventing it from charging more than bargain-basement prices.

McMullan cites the example of Loncin, based like so many makers in Chongqing, south-west China, the only large city not to have banned combustion-engine motorcycles. It has a joint venture with BMW to build engines for the German OEM and was the biggest Chinese exporter of motorcycles in 2014, at just over 1m units, according to CAAM figures. But as a brand they are nowhere. “They’re a quality maker. But you’ll rarely see a Loncin motorbike on the road because they’re rebranded for every country,” McMullan says.

Unlike its cars or trucks, China's two-wheelers are popular in developed countries as well as emerging markets – just not necessarily under the names with which they came out of the factory. For example, the bestselling Chinese brands in the UK are Lexmoto and Pulse, the latter marketing the most popular scooter in the country. But these brands do not exist in China. Dan Frost, at the import company Llexter, told motorcycling website VisorDown that they source their bikes from a number of Chinese makers such as Baotian, Lifan, Shineray, Jinlun and Qingqi and put their own badges on. “China today is like how Britain was in the early days of motorcycling – hundreds of different factories building bikes and selling them under various brands,” he said.

China’s motorbike industry started in 1951, when a copy of the BMW K500 motorbike called Jinggangshan was built for the Chinese army. But the real leap forward came when China got hold of the Honda CG125, the world’s first commuter bike, and created copies of that. The CG125 was launched by Honda in 1975 after the company sent representatives to emerging markets such as Thailand to find out why its latest budget model was not selling. They discovered that the most popular bikes were those that survived on the least maintenance, and the famously durable single-cylinder CG125 was born.

Chinese copiers went to work on the CG and the bike lives on in countless replicas. Another of Honda’s innovations, the C50/90 Cub, with its so-called ‘underbone’ construction, has also become a favourite of the Chinese makers. So much so that the word ‘cub’ is used by many makers and also CAAM to describe underbone models. The biggest displacement for volume makers is 150cc because a special licence is needed to ride bikes above that size in China.

Branding shifts focus
The manufacturers are trying to change this situation. CF Moto is one maker McMullan cites as trying to push its brand outside China, building what it describes as “China’s first large displacement tourer” in the 650TK. Others are trying to use established Western brands to expand their export markets. The Qiangjiang Group bought struggling Italian maker Benelli outright in 2005 and now makes bikes in its local factory wearing the badge. It also sells bikes in Europe under the Keeway brand, a name that originated in Hungary. Also going down the Italian route is Longjia, located in Ningbo, which has reportedly recently bought the right to use the name of scooter specialist Italjet. 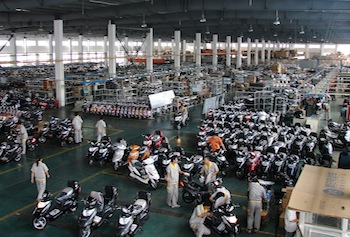 The appeal of a name with history and resonance among buyers is prompting Chinese makers to hunt out old brands. “A lot of Chinese factories are doing it at the moment. I get approached by them, saying, do you know any old motocross brands we can resurrect? They’re looking to export them back out of China into Europe,” comments McMullan. A solid export market is the Holy Grail of makers. Lifan, which is more famous as a carmaker for its copy of BMW’s Mini, quotes the following Chinese saying on its website: “One who earns money in China is a market winner. One who earns money overseas is a national hero.”

Lifan, another maker based in Chongqing, reckoned it earned just over $1 billion in exports in 2014, not just from its motorbikes but also its motorbike engines. Most Chinese bike-makers build engines too and their popularity outside China is another nice export earner. While whole bike exports declined 6% in 2014, engines rose 17% to 2.3m units, according to CAAM.

Foreign makers target local market
As with cars, foreign makers are also present in China, targeting both the export and local market. Long-standing joint ventures include Wuyang-Honda, founded in 1992, while the Japanese maker also has another operation founded in 2001, dubbed Sundiro Honda. The latter has exported scooters to Japan and also still makes the CG125 so beloved of other Chinese makers. It made 863,100 bikes in 2014 according to its website, with just over half a million sold locally and the rest exported.

Going back further is Jianshe Yamaha, which claims to have sold 14m motorbikes since its establishment in 1980. Suzuki is represented by the Changzhou Haojue Suzuki Motorcycle Company, a joint venture going back to 1993 and one that claims to be China’s largest motorcycle JV. This also exports bikes into Japan and in 2013 hit the headlines when it boasted of having exported the first 250cc model there with the GW250.

Haojue is notable for being the biggest motorbike maker in China last year, and the company reckons it has held that position for the past 12 years. It boasts of its state-of-the art manufacturing equipment including Fanuc and Panasonic robots for welding, and ABB robots for painting. Most of its parts are made in-house, including frames, shock absorbers, mirrors, seats and even air filters.

Other notable joint ventures include the aforementioned Loncin/BMW tie-up which started in 2005 to make 650cc single-cylinder engines, moving to twins in 2013, and this year signed an agreement to build a complete 350cc scooter. Loncin said that the company would invest 100m yuan ($16m) to upgrade its factory in Chongqing to “world-class standard”.

Also paired with a Chinese maker is French company Peugeot Motorcycles, which has a tie-up with Qinqgi going back to 2006, with 255m yuan invested to make scooters. The joint venture has sold its scooters back into Europe, including the popular Speedfight model, but since Indian maker Mahindra bought a majority stake in Peugeot Motorcycles, the future of the Chinese joint venture looks uncertain. Another manufacturer paired up with a Chinese company is Piaggio, forming the Piaggio Zongshen joint venture based in Foshan, Guangdong province, that launched in 2004.

Big bikes make little progress
In China, there is no pattern of local link-ups with any of the big-bike manufacturers (with the exception of BMW) in the same way as in Thailand, where Ducati and Triumph make bikes for European markets. This has not prevented the makers themselves trying to crack the Chinese market by opening dealerships.

MV Augusta, for example, has a deal with Loncin to sell bikes through their dealerships in the country, while McMullan reports that premium brands Ducati and Harley Davidson continue to open showrooms despite the restrictions. “Everyone expects it to become a big market for big bikes, but it’s not happening very fast,” he said. “The problem is the money is in the cities and you can’t ride a bike in the cities.” It is also difficult to hit the open road, because motorcycles are banned from motorways. 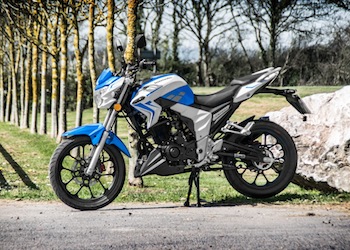 What could sway the authorities in terms of overturning a ban is a general improvement in the quality of the bikes themselves. From being a byword for unreliable cheap transport, Chinese makers are stepping up their game with investment into safety and emissions equipment such as anti-lock brakes and electronic fuel injection. “China is adapting, finally,” McMullan says. “That sort of stuff is coming in heaps. There’s really a shake-up on the way; not this year, but next year.”

He talks of ‘waves’ of quality. “The first wave was poor, with no forethought and no aftersales. The second wave is happening now, where the bikes are bought by people who have no brand loyalty, but who like the quality, available parts and aftermarket service. The third wave is when they approach Taiwanese or Korean quality, brands like Kymco.”

But the makers themselves have to approach marketing differently, as well as making good quality machines. Companies have far too many brands, for a start. For example, Chongqing Yinxiang, China’s ninth-largest maker as of last year, boasts that it has “many best-selling brand names including Yinxiang, Xianfeng, Kenbo, Jida and JLM”. As well as motorcycles, many manufacturers also build a huge range of other vehicles, including ATVs, electric bikes and golf carts; perhaps, like the local hero Honda, they will make generators, power equipment and increasingly cars. Loncin makes a minivan and Lifan builds SUVs, among other four-wheelers. “They’re becoming a jack-of-all-trades,” says McMullan. “They’ve got to start focusing on evolving and consolidation, or they’re going to lose to the Indians.”

Joint ventures at a glance