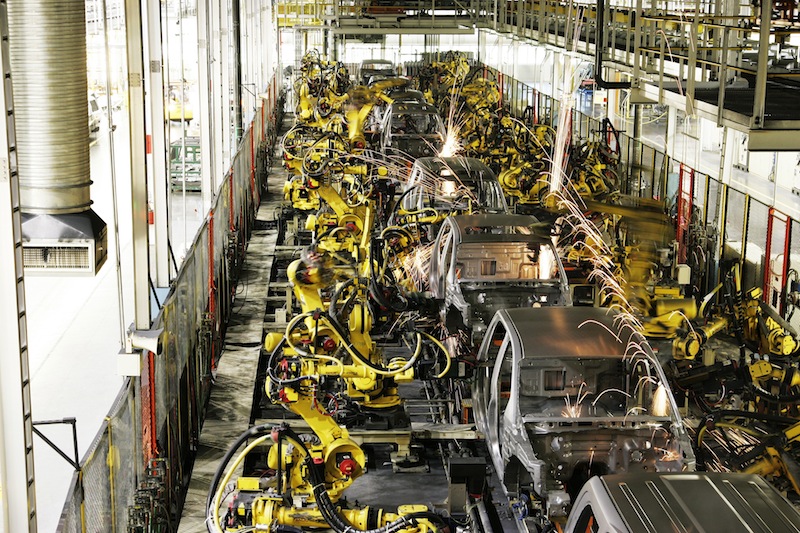 Although Nissan is one of the most recognisably Japanese automotive brands, it is also one of the most outward-looking and is actively engaged in reducing its dependency on its home market. The vehicle-maker actually has three brands: its own brand for the middle and highest-volume segments, Infiniti for the premium segment and its newest brand, Datsun, for small cars in rapidly growing emerging markets.

While Nissan holds a successful middle market position, its small luxury Infiniti brand provides some competition to Toyota’s Lexus and the premium brands from Germany and the UK. Nissan also has an expanding range of high-performance models produced in-house, under the NISMO sub-brand. NISMO versions of the 370Z, Juke and GT-R Skyline are also produced. But these ‘halo’ models are all made in Japan; moving production of one of these models outside Japan would be a major statement by the company.

The OEM is also part of the Renault-Nissan Alliance, which was established 15 years ago this March. Renault has a 43.4% share of Nissan, which owns 15% of Renault, and Daimler holds a 3.1% stake in each.

Nissan’s current corporate strategy goes by the name of ‘Power 88’, which symbolises its aim of achieving 8% market share and 8% operating profit by 2016. At the heart of this strategy is expansion outside Japan. The company has large, and indeed still growing, manufacturing facilities in Europe and NAFTA, but it is outside the triad markets that much of the next round of growth at Nissan will occur. For example, in Brazil the OEM will this year open a new engine plant at Resende with a capacity of 200,000 units per annum.

People power
Nissan’s strategy is set by CEO Carlos Ghosn, who occupies the same position at Renault. Such has been the dominance of Ghosn over both companies and the Alliance over the past few years that the management of his eventual departure will be critical to their future success.

Ghosn himself made it known earlier this year that he would prefer two individuals to replace him, one for Renault and one for Nissan.

It is unusual enough for a Japanese company to have a foreign CEO, but Nissan is also notable for the number of its non-Japanese senior executives, such as former Sunderland plant director Trevor Mann, now chief performance officer with responsibility for ensuring that Nissan facilities worldwide maintain quality, output and utilisation standards.

Production up, profits down
Despite the economic pressures and uncertainty around the world, Nissan had a very positive 2013 in terms of production, with global output up 1.3% to just over 4.95m units – a company record. Financially, though, net results were somewhat disappointing owing to the cost of incentives and falling profits in North America, after foreign exchange rate losses. Nissan saw a 25% rise in global revenue in the last quarter, but with reduced profits. The OEM is profitable, however, and expects to increase its profitability in 2014.

Behind these figures lies a changing company, as Nissan becomes progressively less Japanese. The company’s production in Japan fell by 16% last year to just over 964,000 units; by comparison, US output rose by nearly 23% to over 792,000 vehicles. 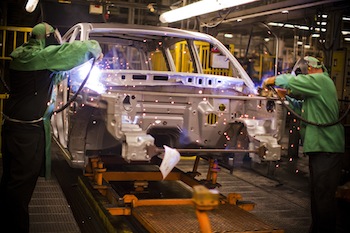 While production in the UK and Spain dropped, in the case of the former this was a function of model changeovers (in fact, the new Qashqai should result in a strong rise in production in 2014/15). In Spain, the decrease came as a result of falling demand for commercial vehicles (CVs). Spanish production will begin to climb once again when the new Almera C-segment car goes into production within the next year.

Meanwhile, in common with many other car brands, Nissan continued to go from strength to strength in China. The OEM’s production there rose by 18% to almost 1.25m units in 2013, including five successive months of rising output from August to December.

New & returning models in Europe
In Europe, Nissan has two major manufacturing facilities. In the UK, it operates the Sunderland facility which is widely regarded as the most efficient car plant in Europe and ranks consistently in the top five Nissan plants worldwide, according to the OEM’s own quality metrics. In Spain, where a smaller plant at Barcelona produces light commercial vehicles (LCVs), although this focus will soon shift when production of the long-awaited Almera replacement begins.

This Almera model was originally due to be made in Sunderland, but production has been switched to Spain to allow the former to make the higher-value Infiniti Q30. Although production of the Q30 will be lower than the Almera (60,000 units versus 80,000 respectively are the initial annual targets), the higher price and specification of the Q30 and other variants which are expected to be added will bring more value to the UK than the Almera, especially for the local supply chain.

Meanwhile, Nissan’s decision to produce an Infiniti model in the UK is not only further evidence of the importance of the Sunderland plant within its network but also of the orientation of UK production towards the premium end of the market (consider also Jaguar Land Rover, Bentley, Rolls-Royce and indeed Mini).

Some of the Infiniti production will take place in a new £250m ($417m) facility, construction of which began in October 2013; operations are due to commence in 2015. The facility includes a new bodyshop and extensions to existing trim and engine lines. The final trim and assembly work will be done on one of the two lines that produce the other Nissan models in Sunderland.

Also in Europe, Nissan will contract some production of its small cars to Renault in France from 2016. This will have several benefits, notably the increased utilisation of Renault’s plant at Flins, and will also give Nissan a European supply source for the Micra, which has been made in India since UK production switched to the Juke. The original plan was to make just 80,000 units per annum, but early this year local reports suggested that Nissan now intends to make 120,000 Micras per year in France.

Expansion in North America
Outside Europe, Nissan is becoming increasingly involved with Daimler via the Renault-Nissan Alliance. The forthcoming Q30 and other potential variants of this model are based on the Mercedes Modular Front Architecture (MFA) platform which underpins the current A-class range. In Tennessee, a new Mercedes engine plant is under construction to supply US-built C-class models, and also a new range of Infiniti sedans including the new Q50, the first Infiniti model to feature a Mercedes powertrain. 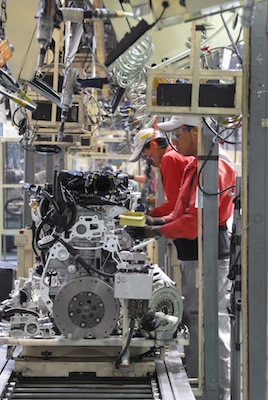 Nissan is also proceeding with the expansion of its own facilities in North America, notably in Mexico, where it opened its very first car plant outside Japan in 1966. In November 2013, the OEM opened its third vehicle plant in the country, at Aguascalientes, with a capacity of 175,000 units per year.

The new plant, which will start production with the compact Sentra sedan, has raised Nissan’s North American capacity to over 850,000 units per year. The new facility is actually the second Nissan facility at this location; Plant 2 will commence production at a rate of 30 vehicles an hour, while Plant 1 can produce 65 per hour.

Aguascalientes Plant 2 is a full manufacturing facility in its own right, with stamping, body, paint and trim facilities. Typical of Nissan sites worldwide, it also has its own bumper plant with paint capability. The new plant also has its own supplier park, which is opening with three companies: Posco (steel), Tachi-S (seats) and Sanoh (brakes and fuel tubes).

The press line at the new Aguascalientes facility is claimed to be the largest in Latin America, with the capacity to produce over 270,000 parts per month at a rate of over 570 strokes per hour. Meanwhile, the bodyshop has 190 robots and Nissan says the automation is more than 70% (although this is quite low for bodyshop automation in new plants, indicating that manual welding is still cost-effective in Mexico). The paintshop is a three-wet system, using water-based technology.

In addition to Aguascalientes, Nissan has facilities which bring its NAFTA production close to 1.47m. In North America, the OEM has set one record after another in recent times, and 2013 production totalled 1.47m in comparison with 1.33m in 2012.

Datsun for developing markets
In India, and indeed other developing markets, Nissan has chosen to revive the old Datsun brand. It has started production of a new range of vehicles, the first of which is the Datsun GO. Production began in February this year at the Oragadam plant near Chennai, an Alliance facility, and will commence in Indonesia and Russia later this year, with a number of other locations also reported to be under consideration.

The Oragadam plant is the only one in the Renault-Nissan group which currently produces vehicles for both companies, as well as the Datsun brand, although Renault Flins, near Paris, will become the first European plant to make cars for both companies when it makes the Micra alongside the Renault Clio and Zoe from 2016.

In Russia, Nissan intends to use Datsun to target first-time new vehicle buyers and is pricing the GO at highly competitive levels to lure them away from the second-hand car market. The Datsun director in Russia has been quoted as saying that the brand’s “main objective” is to become a serious alternative to the used car market. Having been designed as a low-cost product which draws on a number of other Nissan platforms, the Datsun is expected to operate at margins as high as 7%, despite its focus on the lowest price segments (below $6,500).

LEAF to add colour in Bhutan

Nissan is also one of the major pioneers of all-electric vehicles. Along with its Alliance partner, it has eschewed the hybrid route as a means of reducing emissions ratings. But convincing consumers, and indeed entire markets, to switch to electric vehicles (EVs) remains a major challenge. Sales of the LEAF have been disappointing in some cases, and indeed production of the model in the UK is thought to be running somewhat below expectations.

Further afield, however, Nissan has secured an agreement with the government of Bhutan to supply the LEAF as part of the country’s plan to become a zero emissions nation. Nissan is not only supplying the vehicles but helping Bhutan to develop the charging infrastructure.

The country has substantial hydro-electric power generation capabilities, and given its small size, geographic isolation and the cost of importing fuel, it is ideal for nationwide adoption of EVs. Although small in scale by comparison with other markets, this is the kind of move Nissan is likely to have to repeat in order to achieve its desired level of EV sales and market penetration.