As traditional production sites in Western Europe struggle with excess capacity, Turkey is enjoying higher investments and output by global OEMs – with the likelihood of further strong growth 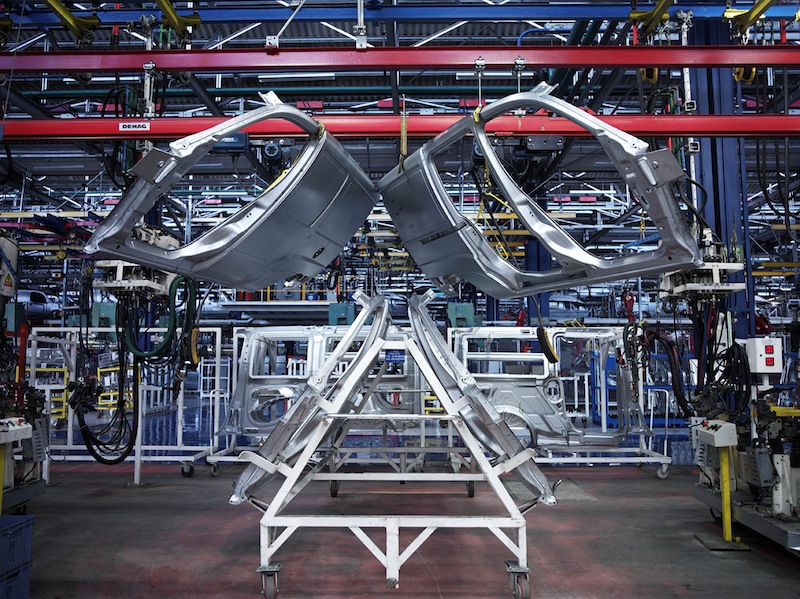 At the same time as Western Europe has been battling problems of overcapacity or underutilised capacity in traditional manufacturing regions, the EU’s south-eastern border has seen continued growth in vehicle production and several vehicle manufacturers have invested heavily in the past few years. Fiat, Ford, Hyundai, Renault and Toyota have all recently completed important projects, while Fiat’s Turkish associate, Tofas, and Toyota are currently in the throes of further investment in their Turkish manufacturing facilities.

Together, car and van factories in the country have long had the capacity to make over 1m units per annum, a figure which continues to rise and will be close to 1.5m once the expansions discussed here are fully operational. Ford is the latest vehicle company to open a new facility, its second van plant, in Turkey. This review examines the scope and rationale of the recent investments by Ford, Hyundai and others.

Despite the recent turmoil in the global economy, Turkish vehicle production has held up remarkably well, and indeed grown steadily, with the potential for further growth equally strong. Production in 2011 was just under 1.235m, and although it fell in 2012 to 1.115m, there was a modest rise in 2013 to 1.166m, and a further boost last year to slightly under 1.219m. In the first quarter of 2015, output was over 347,000, at which rate full-year production of more than 1.3m, possibly up to 1.4m, remains possible, even allowing for summer slowdowns.

Exporting is big business
A high proportion of Turkish production is exported, with an export ratio overall of 74% in 2014 (902,000 out of total production of nearly 1,219,000). Renault, Hyundai and Toyota all export over 80% of their Turkish output, while Ford’s export ratio for 2014 was 77%, but should exceed 80% once the Transit Courier has had a full year of production in 2015. Tofas, the other member of the Turkish ‘Big Five’, has a lower export ratio – 64% in 2014; this reflects its position as a quasi-domestic brand, with most Tofas-made Linea models sold within the country.

There are a number of reasons why Turkish exports are so high. The low value of the Turkish lira certainly helps, but arguably of greater significance is the decision by several OEMs to allocate production to their Turkish plants of vehicles which are manufactured only or primarily in Turkey. There are no other sources for many of the vehicles made in Turkey. For example, now that Ford has closed its UK Transit plant in Southampton, there is no other plant capable of making the Transit van, and the new factory which produces the small Transit Courier has been set up as the sole global source.

The same rubric applies to Fiat for its entire range made in the country, and Toyota with the Corolla Verso and Corolla sedan (at least for European and regional supply in the case of Toyota, which technically could source these models elsewhere).  Renault has also decided to make the vast majority of Clios in Turkey as it has found it difficult to make B-segment cars profitably in France.

Although vehicle production is dominated by Fiat-Tofas, Ford, Hyundai, Renault and Toyota, which together represented nearly 92% of national production in 2014, some companies – and indeed politicians – have not given up on the idea of creating a Turkish automotive brand. During 2014, a local conglomerate, Calik, said that it wanted to use the Turkish truck company, BMC, to develop a Turkish car brand. In the same year, Prime Minister Erdogan also spoke about Turkey “fulfilling its dream of producing a local brand of motor car”.

Fiat
In Turkey, Fiat’s presence is through Tofas, which is a long-established joint venture with Koc Holding, a major Turkish conglomerate; Fiat and Koc both own a 38% stake in Tofas, with the remaining shares quoted on the Istanbul stock market. The core of the company is a factory in Bursa with annual capacity of 400,000 units, although this has yet to be fully utilised. In 2013, the company made slightly under 245,000 vehicles, falling to just under 223,000 in 2014.

As well as producing cars and vans for Fiat, Tofas produces versions of the Fiat Fiorino small van for Peugeot and Citroen, and also makes some versions for the Fiat Doblo van for sale in the US under the Ram name, plus in Europe as the Opel/Vauxhall Combo. Production for Ram will continue, and hopefully accelerate as the Fiat Chrysler merger intensifies the links between the brands. However, manufacture for Opel/Vauxhall will soon come to an end, with the replacement model for Opel/Vauxhall going to PSA in Spain.

Tofas is in the middle of a major investment programme which could amount to more than $1.5 billion once complete. This covers the re-engineering costs of ‘federalising’ the Doblo for sale in North America, ie making it compliant with US safety rules. The aim is to sell at least 20,000 Ram versions of the Doblo per year. The Ram programme has been cited as costing as much as $360m, while more than $1bn is due to be invested in the replacement for the Linea and Bravo compact hatches, sedans and wagons.

Production of these new cars will begin in 2016. The hatchback, the long-awaited replacement for the Fiat Bravo (although whether it will retain the Bravo name is yet to be confirmed), will be sold mainly in Western Europe, with the sedan targeted at Central and Eastern Europe. In an official statement to the Istanbul stock exchange, Tofas said that production of these new models will total 700,000 over the life of the vehicles, from 2016 to 2023. Investment costs have been reduced by basing these new models on the same platform – SUSW (Small US Wide) – which underpins the Jeep Renegade, Fiat 500X and 500L.

It is worth adding that Tofas is more than just a contract manufacturer for Fiat, having its own R&D operation capable of designing vehicles on the Fiat Chrysler platform.

Ford
A joint venture with Koc, Ford Otosan (in which Ford holds a 41% stake) opened a second factory in Turkey in May 2014 at Yenikoy, situated near its existing factory at Kocaeli. The new plant makes the small Transit Courier van and a passenger version, the Tourneo Courier, while the existing Kocaeli factory – which opened in 2001 – produces the Transit van, as well as passenger versions under the Tourneo badge.

The new Yenikoy factory has a capacity of 110,000 units a year and was built in just 16 months with an investment of $511m. Kocaeli plant also makes a larger Ford truck, the Cargo, essentially for the local market. The two Turkish facilities supply not just Europe, but more than 100 markets around the world. 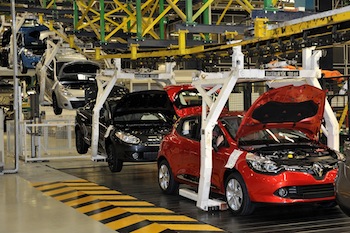 Hyundai
The Korean OEM’s main Turkish facility is a joint venture with local company Kibar. Unlike the Fiat and Ford JVs, in which these companies have less than a 50% stake, Hyundai holds 70%. Cumulative production here now exceeds 1m cars, a total which was reached following a $677m investment to double output to over 200,000 units per annum. The main increase in capacity occurred during 2013 and the factory now makes the i10 and i20 small cars, mostly for Europe.

Hyundai has a second operation in Turkey, in the form of a contract assembly arrangement with Karsan. This had been due to assemble the i800/iLoad van, with production starting in late 2014, but a change of plan means that a larger vehicle, designated H350, will be made here. Production started in March. This deal will see Hyundai investing another $200m in the country, with Karsan contributing $60m. According to a filing with the Istanbul stock exchange, the two companies plan to make 200,000 vans, and some passenger minivans, over a seven-year period.

Renault
The French OEM has the capacity to manufacture around 360,000 vehicles a year in Turkey in a joint venture with Oyak, in which Renault has a controlling 51% stake. Like the other car companies in Turkey, Renault exports the majority of its output, including Clios sold as the Lutecia in Japan, with around 81% exported in 2014. This ratio is likely to increase in future in light of Renault’s decision to source the overwhelming majority of European Clio production in Turkey.

In addition, in June 2014, Renault’s group sales and marketing director, Jerome Stoll, told the media to expect further announcements regarding new models to be made in Turkey, suggesting there would be news of the next Megane or other models in the C segment. As yet, there has been no such news, with Renault’s major recent announcement centred on the production of the Kadjar crossover in Spain. If the Kadjar is particularly successful, it is possible that Megane production in Spain could be shifted to Turkey.

It is worth noting that Oyak-Renault is much more than a mere vehicle assembler; the plant also has the capacity to make 450,000 petrol and diesel engines a year, and as well as supplying the Renault vehicles made in Turkey and France, it sends engines to Renault in Argentina, Dacia in Romania and Nissan in South Africa.

Toyota
The Japanese vehicle-maker’s plant at Adapazari is a fully integrated manufacturing facility, including its own press shop, and plays a key role in the company’s European strategy. It used to share production of both the Corolla and Auris with Toyota’s UK plant, but at the last model change the UK was allocated all Auris production, while Toyota Turkey was allocated the Corolla sedan and Verso. Corolla production has seen around €150m ($167m) invested, with the factory capable of making 170,000 units a year, although it has operated at a much lower rate in recent times. The Corolla is produced mostly for the local market, Russia and former CIS markets, and Israel, while the Verso is produced primarily for export to EU markets. 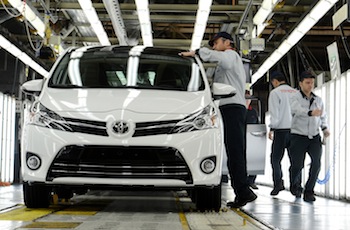 In October 2014, Toyota announced that its Turkish plant would see $187m invested to produce a compact SUV from 2016. This will add capacity of 100,000 units per annum, with the output destined for European and Asian markets. Having started out as a CKD facility in 1994 for the local market, run by a local Turkish company, Sabanci, it became a full Toyota manufacturing facility in 2000, with exports starting in 2002.

In addition, the plant has brought a number of suppliers into Turkey, both European and Japanese companies. For example, the new Corolla has more than 70 suppliers delivering from Turkish factories, with recent arrivals including German company Mubea, which supplies coils springs. Toyota keiretsu member Toyota Boshoku has built a new seat-fabric cutting and sewing facility which supplies its seat assembly factory, making this a largely vertically integrated operation.

Beyond the ‘Big Five’

In addition to the ‘Big Five’, there are a number of Turkish assemblers making a variety of vans and other commercial vehicles. Otokar produces around 3,000 Land Rover Defenders from kits for the local market, including military versions. Meanwhile, Karsan has made some old Peugeot and Citroen models for the local market and also assembled Berlingo and Partner compact vans from kits sent from Spain. These are low-volume activities, however, as is the Honda plant.

Honda’s factory has a nominal capacity of 50,000 units a year, but it produced only 11,600 Civic sedans in 2014, a decline from the 14,800 made in 2013. From time to time, press reports have suggested that the OEM will add another model to this plant, and Honda executives have appeared to confirm the idea. However, nothing definite has happened and the somewhat marginal position of the plant, supplying the local and neighbouring markets, remains unchanged.

In late 2013, it was announced that Isuzu had reached an agreement with Anadolu (Honda’s original Turkish partner) to assemble D-MAX pick-up trucks in Turkey from late 2014, but no further news on this has appeared. Similarly, Chinese manufacturer Chery has reportedly been planning – in association with local company Mermerler – to open a plant capable of making 200,000 units a year by 2015. This project too has seen remarkably little recent information released and exactly when, or indeed if, it will start production and with what volumes remains to be seen.