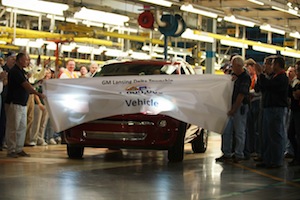 “It’s the soccer moms – first they had to have minivans, now it’s SUVs.” So said the driver taking me to and from GM Lansing Delta Township, about an hour-and-a-half west of Detroit. Interestingly, his knowledge of market demand extended to which car models get stolen most often in Michigan, though we needn’t go into that here (and one presumes it’s not the soccer moms).

GM Lansing DT makes three brands of SUV on the same (Lambda) platform: the Chevrolet Traverse, the GMC Acadia and the Buick Enclave. The workrate of the plant would appear to confirm that demand is high; it is operating three shifts, five days a week, and regional plant manager Mike Trevorrow, who also looks after the nearby Grand River factory, told me there is “lots of overtime right now”. Even though all three vehicles have been in existence for around seven years and are “kind of late in their lifecycle”, sales are still on the up, he said. In 2014, GM Lansing DT turned out 275,000-300,000 units.

The plant is the newest in GM’s North American production network, established in 2006 (five years after Grand River) and benefited from being a greenfield site on 3.4m sq.ft, with plenty of space to expand. Indeed, it is doing just that. In October last year, the OEM announced a $63m investment for the expansion of the bodyshop, paintshop and assembly, totalling 263,000 sq.ft.

The exterior walls have already been erected and the equipment and tooling are now being installed. Plastic sheeting currently screens off the bodyshop expansion from the in-use facility; Trevorrow explained to me that GM is taking a different approach from other OEMs who might close facilities for renovation. At Lansing DT, installation work will be completed in the expansion, then production will be ‘flipped over’ to the new side. He showed me an area of decommissioned machinery along the edge of the current bodyshop, now scavenged by maintenance, which marks where this manoeuvre was performed on a previous occasion.

But what is it that GM will be producing in this new bodyshop? The expansion is not merely a capacity increase, but “in preparation for the next vehicle launch”, said Trevorrow. As for what model, though, his lips have been welded shut by the powers that be. He did tell me it will “probably” feature more mixed materials and that there will be “potential for more aluminium; potential for other kinds of structural materials”. The $63m for the new buildings is dwarfed by the $520m GM is spending on the gear that is going inside. “We’ll take advantage of new technologies in regard to joining of materials,” stated Trevorrow.

“It could be flow-drill screws, self-piercing rivets; it could be adhesives, it could be laser welding,” he continued, leaving open the possibility of using Sellotape. Later, however, he admitted that it is “not going to be SPR”. He is sceptical about the kind of techniques I had witnessed a day earlier, at Ford’s new F-150 bodyshop; welding, he pointed out, is faster, cheaper and gives lighter results – and laser welding is faster still.

So it sounds as though, when the wrappers come off, the expanded bodyshop at Lansing will produce a replacement for the Chevrolet/GMC/Buick SUV, featuring alternatives to steel (aluminium?) and joined by non-traditional methods. At this point in time, the mystery remains about exactly what that mix and those methods will be.

But of course, the critical question is: will the soccer moms like it?