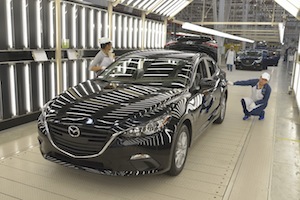 Two out of three restaurants at my hotel in Mexico City are Japanese. This fact is rather more significant than how it impinges on my dining options: why Japanese, why here? Because there are Japanese companies and Japanese people and it makes sense for there to be sushi. A good number of these immigrants to Mexico (a turn up for the books) are connected in some way to the automotive industry. Honda, Nissan and Mazda have all moved in over the last few decades, in a bid to take a bigger bite of export markets such as the US; in fact, each has opened a new plant within the past year or so.

While I’d love to do the same at the hotel (move in, not open a plant), the final stage of my two-week North America tour took me on a one-hour flight north-west to Salamanca, in Guanajuato, where it’s hot enough to fry fish on the tarmac, should you prefer it cooked. Not that there is much tarmac, as the place seems quite underdeveloped. I say this because there are goats and cactuses at the side of the road, people farming by hand in the fields, and men dressed as cowboys who are not on their way to a fancy dress party. But that’s the older generation. The youngsters are finding work elsewhere: at the car plants.

Mazda’s $770m factory at Salamanca is its only production location in North America, and when running at full capacity of 250,000 units per year from early 2016, will raise the OEM’s overseas production from 30% to 50%. As Kieshi Egawa, president and CEO of Mazda de Mexico Vehicle Operation, explained to me when I visited, its establishment in 2014 required a massive recruitment programme in a region where there was no real history of manufacturing and farm hands had to be transformed into line workers. The lack of a pre-existing skilled workforce might be considered a drawback when launching a new operation, but Egawa pointed out the benefits: an abundance of youthful, trainable workers with potential for lengthy service.

Many of the 5,000 personnel at Mazda Salamanca are now employed in the bodyshop, where there are just 140 robots and the automation level is less than 50%, compared with nearly 100% at the OEM’s factories in Japan, where the robots make lunch as well as cars (probably). However, it is not a low-tech plant. Egawa told me that the stamping facility boasts the highest sheet-metal usage ratio anywhere in Mazda, at more than 60%, compared with about 50% in Japan.

One further advantage of the lower automation, said Egawa, is increased flexibility for future model changes, although he will not speculate on what those might be. The factory was designed for the Mazda2 and Mazda3, launching with the 3 in January and adding the 2 in September. Interestingly though, since last month, Mazda Salamanca has been producing a third model – for Toyota. This is the first such partnership between the two companies and enables Toyota vehicles similar to the Mazda models to be made locally while the OEM is in the process of building its own plant in Guanajuato, due to open in 2019.

For where there is one immigrant, there are usually more, as the US Border Patrol will tell you. Guanajuato is being promoted as a developing automotive manufacturing hub in an attempt to shift the focus of regional production from four legs to four wheels; Egawa told me the state government was “very aggressive” in its encouragement to Mazda to settle in the area. There were already suppliers in place, serving GM at Leon, but the Japanese influx of Mazda, Honda and Toyota (Nissan is in nearby Aguascalientes) is sure to increase that supplier base still further – as well as the number of sushi restaurants.