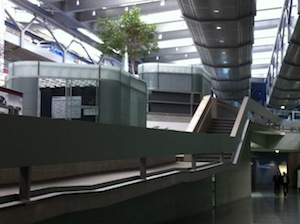 OK, so it’s not Google – there are no beanbags, for one thing – but does the tech giant’s famously quirky HQ have blue-lit bodies-in-white passing majestically overhead? I think not. BMW’s über-cool Leipzig complex, however, showcases advanced technology of a very physical kind.

Leaving the manufacturing floor aside, the bodies-in-white pass through the office area as an inspirational reminder to the workers below. The award-winning building, which opened in 2005, was designed by the renowned architect Zaha Hadid as a “dynamic, engaging nerve-centre” which “transcends conventional white collar/blue collar spatial divisions”. As a radical reinterpretation of the traditional office, it certainly succeeds.

I was visiting BMW Leipzig to see and hear about the OEM’s innovative production methods for its all-electric i3, but it’s clear that a broader vision has been realised here than the design and manufacture of a single model (or two, if you count the hybrid i8 which comes online later this year). This applies even though BMW has gone beyond previous adaptations of conventional vehicles by making the i3 and i8 “born electric”.

As I toured the site, what struck me was the absence of industrial noise. Inside the buildings, teams of robots were quietly building i3 bodies by glueing carbon fibre parts together (no messy welding for BMWi production), while the scene outside was one of tranquility: green fields and wind turbines revolving serenely.

In striving for sustainable production, BMW has succeeded in providing 20% of Leipzig’s electricity from renewable energy (the turbines), covering 100% of i3 production – which uses 50% less energy and 70% less water than standard, as well as halving the noise level.

As we moved from one pristine white building to the next, our guide told us that the site now has a greater biodiversity than when it was used for monoculture farming. Indeed, as he was explaining how the lawns are “mown” by a flock of sheep, a wild rabbit conveniently lolloped across the verdure (nor had it been released by a lackey hiding in the bushes).

I make no comment as to the likely success of the i3 as an individual vehicle (although I would be intrigued to find out how many of the senior executives extolling its virtues actually drive one). But looking at the overall set-up, it seems very much as though BMW Leipzig is leading the way to a new era of automotive production.

Sustainable, stylish and efficient – is this the future of manufacturing? I hope so.